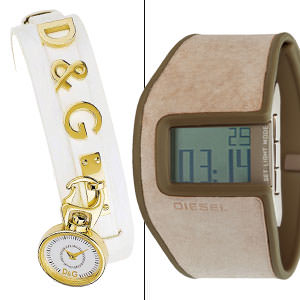 Diesel
Diesel, directed by Renzo Rosso, resembles in a way the famous 'factory' of Andy Warhol. Established near Vicenza, its results, both in terms of products and communication, are achieved by collective methods of creation orchestrated by multi-disciplinary working groups. These are themselves in continual transformation, managed by collaborators from around the world, and whose average age is very young. To sum it up, Diesel is one of the most famous brands in the world of fashion 'understatement'. It is also a name that holds an integral part of the evolution of clothing styles and sets the trends for young fashion. Highly creative, Diesel has been active in watches since the end of the 1990s, when production was granted to the Fossil group. The styling applied to the watches follows the same route as the jeans, eyewear and other products signed Diesel. They are also the fruit of intense work by a team under the attentive supervision of Renzo Rosso. The result is a rapidly evolving collection that is immediately recognizable, both in design and in technical terms, inspired by the styles of the 1970s.

D & G
The signature D & G makes one think of that very Italian duet formed by Dolce et Gabbana, the dynamic duo of the fashion world. The watch collections bearing this name are produced and distributed by the Milan-based enterprise, Binda. This company also owns the successful brands Breil and Wyler Vetta, and distributes Seiko in Italy. Binda is a major player in its home market but is now poised to move rapidly into international markets, especially those in the Latin world. The licencing agreement between these two young 'rebels' of the fashion scene and the well-oiled production and distribution machine of Binda garnered a lot of attention when it was announced in 2000. It also pushed other firms and anti-conformist personalities to try their own luck in the watch arena, thus creating a second wave of the 'fashionization' of the watch. The stylistic challenge posed by the combination of a provocative and transgressive style mixed with traditional values in terms of materials, finishing, etc., was resolved in two ways. D & G watches used certain technical canons of watchmaking (such as, for example, two time zones, decentralized indications or an 'onion' shape) but placed them in very stylish designs. In a way, fashion appropriated the mechanical.