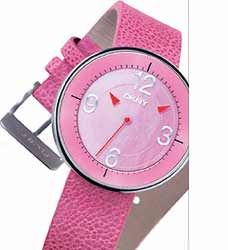 Donna Karan grew up in the world of fashion and launched her own company and in 1985.
The DKNY brand was created in 1989 to meet the needs of a broad range of lifestyles and then in the spring of 2000, Donna Koran honed in on time and the DKNY watches were born. The DKNY watch brand is made under licence and it is a part of the Fossil Group, which has a stable of watches including its own Fossil brand and Giorgio Armani.
The DKNY watch brand is now in over 60 countries, with 60% of the brand's sales emanating from outside the United States. In Europe, the UK and Germany are the leaders and in Asia sales are excellent in Korea, Thailand and Taiwan. Australia, Canada and Mexico also apppreciate the modern design of DKNY.
Since DKNY's launch the company has enjoyed double-digit increases annually.
The Fossil group's overall sales for 2002 was US$ 663.3 million.