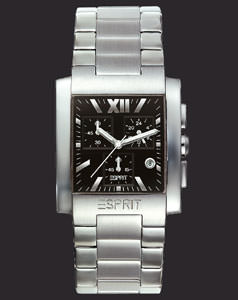 Esprit was founded in San Francisco, by Susie and Doug Tomkins and in 1984 created a campaign that promoted an image rather than simply clothing. The licence for Esprit timewear was granted in 1993 and the international launch took place a year later.
Esprit was one of the first international watch brands to introduce fashion awareness to the medium-priced watch market segment and it is one of the leaders in most countries around the world where the Esprit fashion name is active.
The target groups are for women the 18 to 40 year olds and for men 20 to 40 years old. These groups are looking for quality watches at a reasonable price with modern styling.
The watches are distributed in over 24 countries (Europe, Asia, Middle East) with the main markets being in Europe.