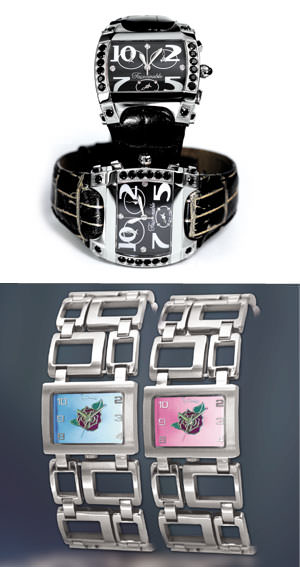 Façonnable
Façonnable began life in the South of France as a tailor's shop in 1950. Under the leadership of the founder's son, Albert Goldberg, the company opened its first boutique in Monte Carlo in 1973. Watches were introduced in 1989 and today under the resourceful eye of Michel Benatar, the company's designer and Director of Façonnable Timepieces, it now produces around 15,000 timepieces annually - 90% of which are jewellery watches.
The breakdown of the sales figures is USA 25%, Middle East 25%, Europe 40% and Asia 10%.
Façonnable was taken over by Nordstrom Inc. in 2000, a company that enjoyed net sales of US$ 6 billion in 2002.
Façonnable watches are eye-catchingly different with their innovative stone-settings and unusual forms. Rubies on the hands, new case shapes, lugs and bezels set with black sapphires, diamonds, citrines and specially designed oversized indices.

Fiorucci
Elio Fiorucci began his career as a retailer in Milan in the 1960s. In 1974 his career took off internationally with his colourful clothing and Fiorucci stores appeared in New York, London, Los Angeles, Paris and other European countries. The Fiorucci watch brand has appeared recently and the watches maintain that same colourful appearance as the Fiorucci trade mark clothing.
The watches are manufactured under licence by the Peace Mark group and break with the conventional watch mould by offering a modern structured look combined with a dash of colour - from the elegant to the bold with a touch of zaniness.