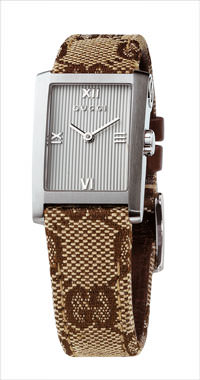 Gucci was the first of the fashion houses to enter the watch business when Severin Wunderman held the licence for over twenty years until late 1997. At that time, Gucci used to sell 1 milllion watches per year. Right now, the Gucci Group is in turmoil. President and CEO Domenico DeSole is leaving together with Tom Ford. According to many observers, they will be very difficult to replace. The Gucci Group, which includes Boucheron, Yves Saint Laurent and Bédat & Co as well as the Gucci brand of watches, is a part of the world's third largest luxury group, Pinault Printemps-Redoute (PPR) which is headed up by François Pinault. Sales for the Group have more than doubled since 1997 and attained 27,375 million euros in 2002. But the latest figures show an important decline.
The Gucci watch brand's CEO is the recently appointed Jacques-Philippe Auriol.
The Gucci watch collection offers ladies' and men's models from the classical to the trendy. The entire collection of eye-catching timepieces is an elegant blend of Italian design, modern styling and Swiss craftsmanship. Considered as the absolute leader in fashion watches, Gucci has tried to move up-market. Consumers didn't follow and the brand recently lost its innovative vigour. The months to come will tell us if the brand manages to re-discover its vigour and its determining influence.