The awakening of Vulcain


Among the many watches that have left their mark on the great and small histories of watchmaking, there is one that, after World War II, perfectly symbolized the new period that was opening before it: the Cricket watch by Vulcain. The good news? It is back.

The awakening of Vulcain

Among the many watches that have left their mark on the great and small histories of watchmaking, there is one that, after World War II, perfectly symbolized the new period that was opening before it: the Cricket watch by Vulcain. The good news? It is back.


Introduced in 1947, the Cricket from the ‘Fabrique de Montres Vulcain’ is the first alarm wristwatch worthy of the name. Up to then, various attempts to integrate an alarm into a watch were not credible because the sound was too weak to dependably wake a sound sleeper. After five years of research and development conducted by a group of watchmakers and engineers, Robert Ditisheim, then owner of Vulcain (an enterprise founded in 1858 whose trajectory was full of remarkable pieces) presented a new manual winding calibre equipped with two independent barrels – one for the movement and one for the alarm – that produced a sound more powerful than ever attained before. It would assuredly awaken the most impenitent sleeper with its 25-second chime that sounded a little like a cricket chirping. Thus, naming its new watch after the little insect, Vulcain introduced the Cricket. The success was immediate and the company would go on to produce several hundreds of thousands of these interesting watches.
A large part of Cricket’s fame is undoubtedly due to the people who took interest in it right from the beginning. The American Presidents Truman, Eisenhower, Nixon and Johnson all proudly wore their Cricket, which became the ‘watch of the presidents’ and was recognizable by its special alarm that sometimes interrupted strategic meetings.
In 1950, the basic model was improved, and in 1958, Vulcain launched a miniature model for the ladies, the Golden Voice. In 1961, a model baptised Nautical appeared, with an alarm that was audible under water. 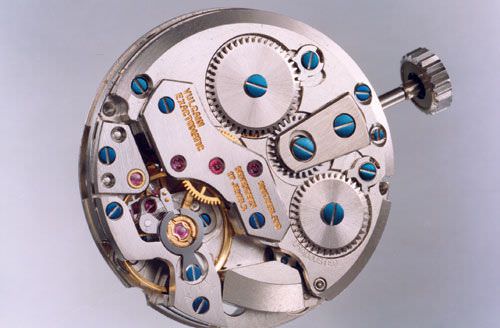 
Renaissance
This delightful adventure came to an end at the beginning of the 1980s with the onslaught of the quartz movement. During this period, the quartz crisis turned the watch world totally upside down and the group that owned Vulcain abandoned all watch production under that label. The song of the Cricket seemed silenced forever.
In 2001, however, the enterprise PMH (Production et Marketing Horloger SA), under the direction of Bernard Fleury, acquired the dormant brand as well as the rights to its legendary calibre. The aim of PMH was to ‘awaken’ the Cricket. By spring 2002, the Cricket was chirping again.
“We were absolutely not content to merely reproduce the Cricket as was,” explains Bernard Fleury quickly. “We started with the basic calibre and completely revisited it in view of industrializing its production. Therefore, we took the plans from the 1940s and, thanks to current tools such as 3D modelling, we were able to reinvent the basic calibre that is identical in design to the original but now has the advantage of different materials, up-to-date processes, and revisited strategic elements such as the balance. We have improved certain component parts, such as the barrel and the alarm release mechanism, and have reworked the water-resistance aspects. We have also increased reliability by improving the anti-shock system, while maintaining the unique principle of having only one winding stem for both barrels.”

New collections
In parallel to industrializing the product, conducted in concert with a group made up of a dozen sub-contractors in the Jura region who mastered the entire operation, Vulcain began to redesign the collections in the same spirit that made its reputation. Maintaining the same proportions as the famous Nautical model (a diameter of 42 mm), and starting with the original design from the period, Vulcain developed a series of new models equipped, of course, with the alarm. Thus, the classically styled Dual Time appeared, with an easy-to-use and readable hour indicator on the rotating flange. Then came the Classique version with an enamelled dial, as well as a new feminine model, the Cricket Lady, which was equipped with the same calibre but in a smaller size (33 mm). The ladies’ timepiece is a great success in both its jewellery models and more classical styles.
This year, Vulcain is presenting a version of its Men’s model equipped with a date and a rapid correction system placed at 10 o’clock, as well as a new tonneau line, Millénium 1928, inspired by a superb Art Déco model (and delivered with a bottle of fine wine).

Imperial Gong
A higher step was taken in the direction of Haute Horlogerie with the very recent presentation of an original watch: the Alarm Tourbillon. This masterpiece, featuring a superb flying tourbillon (62 component parts for the cage, with a total weight of 0.50 grams) also retains its famous ‘cathedral’ type alarm, thus earning it the appropriate name of Imperial Gong. The strike of the hammer on the gong, coiled two times around the movement like the most prestigious minute repeater, is visible through an opening at 12 o’clock. Through another window, at 3 o’clock, the ratchet of the striking mechanism and the ratchet of the movement are visible. The luminescent, triangular, red alarm hand is easily adjusted using a pushbutton at 2 o’clock and the crown. This is undoubtedly the most sophisticated watch alarm in existence today. Its finishing is on the same level as its technical prowess. The classically styled case is in 18 carat pink or white gold; the dial is made of silver with a hand-guilloché pattern and features 18 carat gold hour markers. The movement is perfectly finished in a circular graining pattern and the Côtes de Genève, with chamfered edges and blued screws. It is also visible through the transparent sapphire crystal caseback. 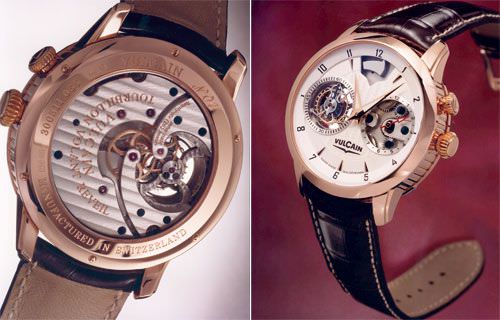 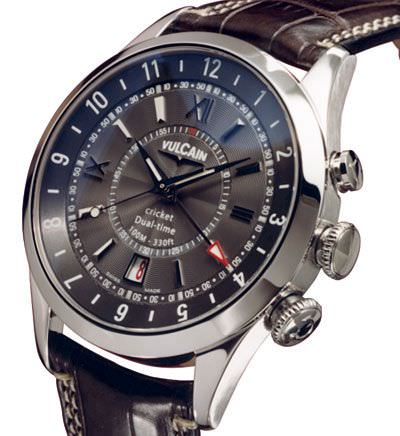 
Distribution
"The challenge that awaits us,” explains Bernard Fleury, “is to now re-enter markets that are more and more dominated by the large groups. But in this courtyard of the ‘grands’, our specialization and our distinct identity are allowing us to make our way. A piece like the Imperial Gong, that will be produced only in very small quantities (some 20 or so per year) permits us to strengthen our position as the historic leader in the alarm watch category. Even more, it gives us heightened visibility. It also allows us to build up our internal development capabilities by focusing all of our strengths around a common objective. This is a road that has taken us two years to travel. The Imperial Gong is also a piece that demonstrates our savoir-faire. At present, we want to develop new house calibres.”
The stated goal of Vulcain is to produce 5,000 timepieces per year, gradually increasing production to 10,000 pieces. The next goal in terms of distribution is to re-attack Vulcain’s historical market, the United States. Already many old pieces have come back to the brand’s headquarters in Le Locle, near La Chaux-de-Fonds. “It’s crazy how people are attached to their old Cricket,” says Fleury with a smile. Let’s bet that they will also feel the same attachment to the very beautiful new Cricket.