The case of Locman


Locman is a true Italian success story. The young brand, based on the Isle of Elba facing Tuscany, has made its presence in the ‘Bel Paese’ its winning card. “We began our tale with the strong mechanical tradition that has historically existed in Italy,” says Marco Mantovani, President and CEO of Locman, “in order to succeed in elaborating stylish projects, still a national value, which has, as its starting point, the watch-object. In Italy, we have been lucky to breathe the culture of the ‘beautiful’, and I believe precisely that the mission of an Italian, working in production, is to simply make beautiful things.”

The case of Locman

Locman is a true Italian success story. The young brand, based on the Isle of Elba facing Tuscany, has made its presence in the ‘Bel Paese’ its winning card. “We began our tale with the strong mechanical tradition that has historically existed in Italy,” says Marco Mantovani, President and CEO of Locman, “in order to succeed in elaborating stylish projects, still a national value, which has, as its starting point, the watch-object. In Italy, we have been lucky to breathe the culture of the ‘beautiful’, and I believe precisely that the mission of an Italian, working in production, is to simply make beautiful things.”

But the ‘Locman programme’ goes well beyond simply the aesthetic aspect, and encompasses the production, as well. In other words, the Made in Italy label, is calculated not only for its strict values but also for its capacity to go straight to the heart of the product’s construction. This ability depends also on the existence of a capillary network as well as on the super-specialized Italian artisans who are experts in mechanics (this is no secret since, as we know, many component parts of a Swiss watch often come from Italian ateliers). In the case of Locman, we are not necessarily talking about the production of movements, but rather the creation of cases or other functional and exterior elements that form an integral part of the timepiece. 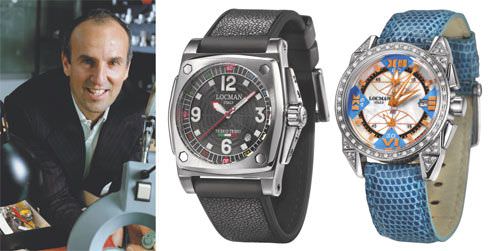 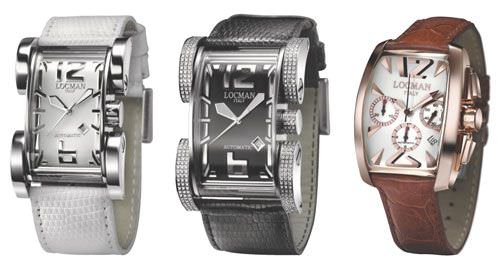 
“This is one of our strong points,” continues Mantovani, “and it means being able to master advanced technology, such as fashioning cases in carbon or brilliant titanium that we use in innovative models at the crossroads of fashion and design.”
It seems therefore that it is not so much the realm of complications that interests Locman (for its movements, the brand uses exterior suppliers, offering the best of Japanese technology), but rather the ability to concentrate essentially on creating its own watch-object. “Having said that,” insists Marco Mantovani, “we have the greatest respect for the Swiss watch tradition in the elaboration of mechanical watches, but it is an area that we willingly leave to them. In Italy, we say, ‘to each his own specialty.’ Our vocation is to make design-oriented pieces, with the understanding that, for the movements, the Swiss and the Japanese are unbeatable.”

A veritable group
Founded in 1985 by Marco Mantovani, the Locman brand makes more than 250,000 watches a year (of which about 190,000 bear the brand’s own label on the dial, with the others being private label pieces for others), and employs around 300 people. The company is organized in a vertical structure made up of specialized units in the different sectors. The unit that heads the group is called Locman Spa, and its headquarters are in Tuscany, on the Isle of Elba, which houses the administrative offices, technical laboratories, quality control units, assembly, warehouses, and logistics. Branch offices are to be found in Florence, Milan and New York.
Most of the production phases (in particular the construction of cases) takes place within the structure of Genesi, in Milan and surrounding areas, which is considered by many as the most efficient and modern factory in the panorama of Italian watchmaking. An additional company, Materie Future, is specialized in the production of carbon fibre component parts.
Communication and press relations, on the other hand, are managed by Marchio Giallo (do you remember the colour of the dials of the first Locman watches?), whose headquarters are in Milan. This company also manages the brand’s advertising resources. Besides the house brand, the Locman Group also controls: the collections of Leandri watches (mostly masculine and sports models); the new brand Teso Tesei (named after the heroic Italian soldier from World War II, who was born on the Isle of Elba) with collections made up essentially of models for professional divers whose dial features the symbol of the Italian Military Marine forces; and the latest brand called E.T. for Elba Team, which targets a younger and more exuberant audience with coloured models characterized by the transparency of polycarbonate.

A continuous
and reasoned expansion
Locman has a very precise programme relating to its product strategy, and the same can be said about its distribution, which today, includes more than 400 sales points in Italy and about 1,200 around the world. “From 1999 to 2002,” explains Marco Mantovani, “the period that, in a certain way, represents a change of direction from the initial phase of Locman’s life to its current growth, the sales strategy was, first of all, to strengthen our presence in those markets where we have direct subsidiaries, i.e. Italy and the USA. Then we attacked other markets, with the strong intention to move into one after the other, selecting them in harmony with our human resources and the expectations of each particular market. We start from the principle that it is absolutely not necessary to be present everywhere. Above all, we are interested in the most attractive markets in terms of trends and those that are the most easily managed.”
In following this principle, Locman is today present in Hong Kong, but not in China, in Southeast Asia, but not in India, in Australia, but not in Africa. “We receive many requests from Russia,” adds Mantovani, “but up to now, we have not had the time to make a detailed visit in order to meet the right people. Therefore, for the moment, we are not taking this step. As we say in Italy, in this case, but also in many others, this might be ‘a step than is longer than the leg.’”
Locman thus concentrates, above all, on those markets where commercial networks already exist and where the public already understands the ‘Made in Italy’ label, and is therefore disposed to accept the innovative qualities the brand brings to watchmaking in terms of technology and design.
“It is an explosive and very advanced concept,” emphasizes Marco Mantovani, “which is heard a lot in Italy these days, of course, but also in the USA and in Japan. The latter market, in particular, is very important for Locman, in light of the fact that there is a true appreciation for the ‘Made in Italy’ label, which is a magnificent trendsetter for all of the Orient.”
Starting with these three markets (Italy, Japan, USA), Locman has expanded into the world. For the brand’s strategy, the year 2006 has been expressly dedicated to Europe, with a special effort directed towards Germany, England, and France, considered as the highest priority markets.
The other important point in the Italian brand’s current commercial strategy is to open its own name boutiques. Today, there are 14 around the world, including six in Italy (one on the Isle of Elba which is the brand’s home territory, one each in Florence, Porto Cervo, Brescia, Salò and Cervinia), as well as five in Japan, and one each in Hong Kong, Jakarta and Istanbul. “These brand boutiques are very important because they serve to transmit the Locman message with precision and consistency,” comments Mantovani. “Our watches are not immediately understandable to the public at large because they go beyond the generally accepted concept that a watch must be Swiss or Japanese. However, with our name brand stores, we do not want them to account for more than 10 percent of our total global turnover.” The Locman boutiques, unlike those operated by other brands, are not all identical around the world. Instead, they adapt as much as possible to the place where they are located, creating a case-by-case scenario, which can be either more classic or more innovative in direction.