WYLER Genève gets the Zagato makeover


Watch and car companies have been teaming up since the retirement of the horse. It all started with chronographs for timing car races and dashboard clocks, but has now evolved into a whole new arena of brand ‘combos’ where both brands benefit from the notoriety of the other. Think of Panerai and Ferrari, Audemars Piguet and Maserati or Breitling and Bentley. Just as the watch industry was seemingly running out of car manufacturers to join forces with, Wyler Genève announced its association with the bespoke coach-maker Zagato.

WYLER Genève gets the Zagato makeover

Watch and car companies have been teaming up since the retirement of the horse. It all started with chronographs for timing car races and dashboard clocks, but has now evolved into a whole new arena of brand ‘combos’ where both brands benefit from the notoriety of the other. Think of Panerai and Ferrari, Audemars Piguet and Maserati or Breitling and Bentley. Just as the watch industry was seemingly running out of car manufacturers to join forces with, Wyler Genève announced its association with the bespoke coach-maker Zagato.

Unless you happen to be a confirmed car en-thusiast or the owner of a DB7, there is a good chance that you have never heard of Zagato. But that’s normal; Andrea Zagato is like the Christophe Claret or the Jean-Marc Wiederrecht of the car industry - one of those talented individuals working in the shadows, creating masterpieces for other brands.

So who exactly is Zagato?
Like serious watch collectors (or ‘whales’ as they are often called in the trade), devoted car collectors just aren’t happy with the same car as everyone else. But there is a problem - unlike watches - making limited edition cars is a little more complicated and far more expensive due to the rigid car safety standards. The solution: outsource to the Zagato Atelier where the designers will take a regular Ferrari (if there is such a thing!) or a Maserati, for example, and subtlety redesign it, feature by feature, detail by detail, creating a whole new look either for a one-off creation or a limited series.
The Zagato Atelier is hidden away in a dreary Milanese industrial zone. The outside looks mysteriously like an abandoned garage with tyres and piles of rubble littering the entrance. The factory is so well disguised; it could be a secret branch office of the CIA!
Inside, however, is a different story, once through the door, a huge sterile white showroom opens up with lines of limited edition cars displaying the history of Zagato design. Only a select few have ever been invited inside. Sitting in the front row of Zagato’s private cinema (in the very same spot preferred by Luca Cordero di Montezemolo, Ferrari’s President, no less) I was privileged to witness Zagato’s portfolio of ‘before’ and ‘after’ photos of the company’s creations. It is amazing how some of the sexiest cars on the road can be made to look even sexier. The atelier keeps the DNA of the client’s brand, but manages to incorporate the Zagato style, taking each car to a new level of design.
So when Wyler Genève put a watch in Zagato’s hands, the company did exactly the same thing.


The Wyler-Zagato watch
Normally in the typical watch / car collaboration, it’s the watch company that designs the watch for the car company and not the car company that designs the watch for the watch company. But who cares which way round it is as long as it looks good, right? And, it does.
The Zagato-Wyler watch is the fourth collection to be introduced since the brand re-launched last year. After a chronograph collection, a tourbillon line and some high-jewellery pieces, the Zagato-Wyler watch is a dynamic follow up.
The Wyler-Zagato model keeps the signature titanium case with its triple protection system (Incaflex balance wheel, avant-garde sprung case and unique crown protector) and its visible external shock absorption function that is built into the watchcase. To this, Zagato has masterfully incorporated a number of details. A two-zone dial has been crafted in brushed alumi-nium with the division between the two levels cut in the form of the famous Zagato ‘double bubble’ – the shape of the rear windows of the cars. An applied ‘Z’ in red replaces the index at 9 o’clock, a red tipped pointer adorns the second hand and the power reserve indicator is designed like a car’s petrol gauge – ‘E’ for empty and ‘F’ for full. True to the Zagato spirit the timepiece will be available in a limited edition of 25 pieces only. 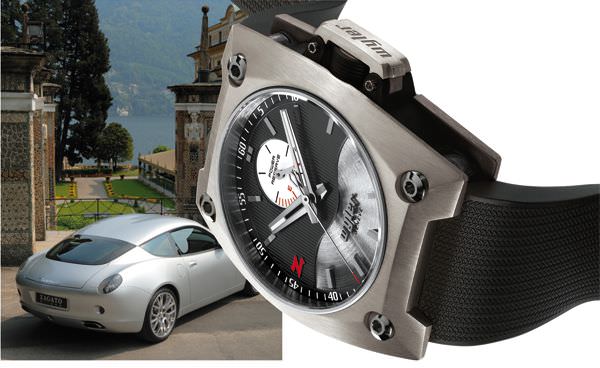 The joint venture
How did the two companies start working together? Andrea Zagatto and Marcello Binda, President of The Binda Group (Wyler Genève, Breil and D&G), were childhood friends. There is even a class photo of them as mischievous four year olds to prove it. They then went to university together before going their separate ways. But 25 years later, the two friends have decided to work together and this is the start of a long-term agreement with, hopefully, many joint projects to come.

Wyler Genève 18 months on
Wyler Genève has over a hundred years of history and was re-launched by The Binda Group at BaselWorld in 2006. The brand is probably best remembered for its 1956 publicity stunt of dropping two watches from the top of the Eiffel tower (for those of you who don’t know the story, they still worked perfectly after their rather violent landing!). The revamped company is committed to reviving the original brand with a focus on the historical innovations, combined with the latest high-tech materials. Now emphasis will be on production. The brand estimates that it will produce 1,500 pieces by the end of this year, with steady growth planned over the next few years. There have been a few hiccups with the production of the case, as Bruno Grande, Deputy-CEO explains, “Like most brands, we have problems with production due to bottlenecks at suppliers. However, as we remained modest with our objectives, we are on target with our plans.”
Distribution has been widespread, with over 50 points of sale in the territories of France, United States, United Arab Emirates, Latin America, Turkey, Caribbean, India, China, Singapore, Malaysia, Russia, Ukraine (plus the former Soviet Republics), Italy, Spain and Switzerland.
The aim for the future is to consolidate business and increase the number of references to enhance the collection. From an operational point of view, the company is committed to continuing to build the structure of the company in order to cater for the future growth. It is a wise plan because it looks like the Zagato collaboration is going to appeal to many a watch and car enthusiast alike. While Wyler Genève has no plans to develop the company at the speed of a Ferrari 575 GTZ, it is taking things steadily and slowly, but with four collections in 18 months, it certainly isn’t letting any grass grow under its feet! 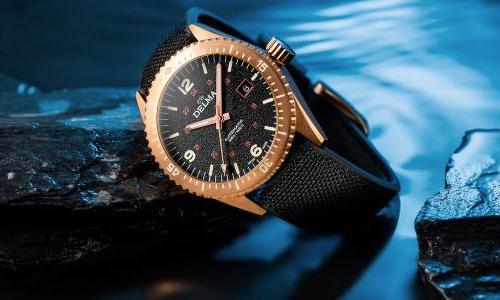