Lütolf Philip creates the first watch with a helicoidal spring


Lütolf Philip creates the first watch with a helicoidal spring

Those who claimed a few years ago that “everything has been discovered in watchmaking” were seriously wrong. No, not everything has been done—far from it. This holds especially true in research carried out in the realm of ‘constant force’.
In this issue of Europa Star, we have already presented one solution to the constant force dilemma that was advanced by Girard-Perregaux (see The silicon revolution). In this present article, we offer another solution that is the fruit of concerted efforts by an outsider to the world of watchmaking. Philip Lütolf (who created a brand using his own name, but with the words in reverse order - Lütolf Philip) was determined to attack the problem of constant force by creating a new type of spring. Out with the balance spring, in with the helicoidal spring.

In search of power
Lütolf is a charming person whose enthusiasm is contagious. He is also obviously proud of what he has accomplished. This year during the SIHH, he presented what he calls “a new watchmaking experience”. Before we talk about his new invention, let’s go back a little in time.
Philip Lütolf was born in Geneva in 1967. After an HEC degree from the University of Saint Gallen in Switzerland in 1991, he worked for nearly ten years for various multinational companies (notably in the auto-mobile sector, which, we will see later, turned out to be crucial to his future). Following this he spent several years as a consultant.
At the age of 38, he suffered a cerebral attack, causing him to take stock of his life. Thinking back to his childhood and how he loved to tinker and create all sorts of mechanical toys, he decided that what he really wanted to do was work with watches. The next question, however, was how to create something truly new in an already overcrowded environment. Should he venture into a new method of display? No, too superficial. A greater power reserve? No, not interesting—too much like making a larger gas tank for a car. So what attracted his interest? The answer was ‘power’. How could he give a watch more power and, at the same time, improve its rate and performance with constant torque?


A mechanical turbo
Lütolf began thinking about the spiral balance spring that has been at the heart of watches since 1475. The spring stores rather little power but yields a good amount of torque, even if the curve of the torque is not perfect. For centuries, watchmakers have tried to flatten this curve to obtain a constant force.
Understanding these limitations, he decided to experiment with other types of springs, notably the helicoidal spring that was originally designed by Leonardo da Vinci many centuries earlier. The maximum power of this type of spring was 20 times greater than a traditional spiral spring but it also posed a problem. Its energy discharges very rapidly and its curve is less constant than that of the spiral spring.
Lütolf then thought back to his days in the automobile industry and wondered if he could use the stored energy in the helicoidal spring over only a small selected portion of the curve. Could he also call up the power on demand, using a turbo system that engages and disengages? Should he construct a mechanical turbo? Yes, he reasoned, but now he was faced with yet another problem. The considerable force accumulated in the helicoidal spring amounted to no less than 10 kg! How could the tiny steel gears of a watch resist such a force without shattering?
The inventor then turned to a material that he named Strongnium® Diamond Carbide, whose precise formula he keeps secret. (“It has better protection than a simple patent,” he affirms.) This new material is a special carbide coated with an amorphous layer of diamond in order to reduce friction. The new compound is also extremely difficult to work with. It takes eight hours on three different machines to produce only one gear. Then another obstacle surfaced. While the Strongnium® gears may be able to withstand this higher force, what happens to the pivots when subjected to such intense radial pressure? Lütolf’s solution was to replace the traditional rubies with ceramic bearings that he had specially developed. The springs themselves are made of titanium nitride. Let’s take a closer look at this mechanical turbo and how it functions.

The ‘Bi-Planetary Differential’ and the ‘Automatic Torque Control System’


200 more components
During the first stage, four hand-wound helicoidal springs transmit their energy, as they unwind, to a mechanism called a ‘Linear High Strength Regulator’. This device reduces the energy and re-transmits it to a gear train, which in turn rewinds the barrel spring to achieve the optimal energy.
At any given moment, a unit, the ‘Bi-Planetary Differential’, reads the torque of the barrel spring and mechanically transmits this information to the ‘Automatic Torque Control System’ via the ‘Steering Control Distributor’. When the Automatic Torque Control System receives this information, it releases, on demand, the exact amount of force necessary to maintain constant torque of the barrel spring, via the ‘Instantaneous Double Escapement Trigger’. It is vital that this energy be transmitted in one step. This self-regulating mechanical system can thus accumulate energy during the operation of a watch and then release it instantaneously when needed.
This complex turbo system has 200 more component parts than a traditional calibre. This makes it undoubtedly the most complicated ‘basic’ movement ever produced. But why make such a complicated system? By separating the production of energy from its regu-lation—by constructing a veritable mechanical turbo— Philip Lütolf affirms that he has succeeded in significantly reducing the variations in torque and thus in “delivering a constant force within the zone of defined optimal operation.” His watch should therefore run with considerable precision. 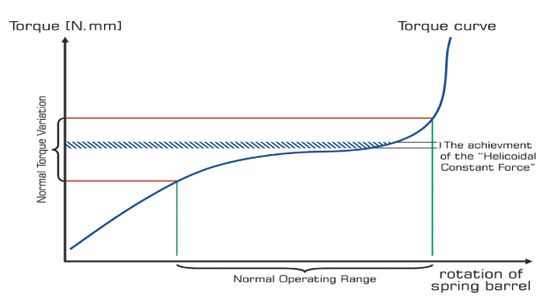 Like a self-supporting chassis
This new system equips the new HP-1 (Helicoidal Power) watch. Its case has also been the subject of special research since it has the added function of maintaining the powerful helicoidal springs in place. To return to our car analogy, the case is a sort of self-supporting chassis that holds up the ‘engine’.
To reach his goals, Philip Lütolf took all the time he needed. Since 2005, he has carried out a whole series of simulations, tests, prototypes, and validations. The first HP-1 watches should see the light of day in January 2009. A limited series production (38 watches for the first one, with a retail price of around 600,000 Swiss francs) is planned for the end of 2009.
This first model will provide the hour, minute, sweeping seconds hand and a second hour and minute indication controllable by a pushbutton. It will also have an energy indicator and a power reserve indicator. (In principle, it works eight days, but trials are still being conducted.) Theoretically, this high power motor should prove ideal for use in various complications, but only the future can tell. For now, the HP-1 must prove that its performance is up to the level of its complexity.