As Keith W. Strandberg rode his rented Triumph Bonneville, a proper British motorcycle, around the Isle of Man, on his way to visit independent watchmaker Roger W. Smith, he had the chance to reflect on the challenges facing independent watch brands today.

As Keith W. Strandberg rode his rented Triumph Bonneville, a proper British motorcycle, around the Isle of Man, on his way to visit independent watchmaker Roger W. Smith, he had the chance to reflect on the challenges facing independent watch brands today.

Certainly, independent brands face an uphill battle against the bigger brands. Major brands have big marketing budgets that make it possible for them to be in front of customers every issue of every magazine, while the small brands don’t have the funds to do this. They have to rely on the great work they are doing to get them noticed, by journalists, bloggers, collectors, retailers and, finally, end customers. The reality is that smaller brands, in order to be successful, have to be better marketers because they can’t just spend money. They have to be innovative and creative and find new ways to start people talking.
At the same time, however, Smith and his fellow independents are living in the right time to do that marketing, with the communication possibilities made available by the Internet, watch forums, Facebook, Twitter and other social media. These small brands can reach people all around the world.

Smith has been very active in all these areas and he has also decided to make things happen himself and invite journalists to his workshop on the Isle of Man, to see how his brand of watchmaking differs from that of mainstream Swiss brands. And, it is different, and not just because of the relative isolation of the Isle of Man. Smith doesn’t travel in the same circles as the Swiss watchmakers, who see each other all the time and know what each other are doing. Smith was blissfully unaware of recent developments in the industry and new product introductions. In addition, there is no supplier network on the Isle of Man, so Smith is forced to do it all himself.
“My way of working is different from everyone else because I didn’t go through the Swiss watch industry, and I don‘t have the influences of the Swiss industry in my work,” explains Smith. “I think it’s done me good to not be in the Swiss industry. I had to learn everything from scratch. I have been able to keep the English way and my workshop is really English. No one else is doing what we are doing - we are doing very individualized pieces. We don’t use the CNC machine for volume, but for precision, then we finish everything by hand.
“We have gilded and frosted pieces, so the aesthetic is very English,” he continues. “We have raised barrel bridges, where we hide the winding mechanism, which is a very English feature. We have black polishing throughout the pieces, and the watches are very three dimensional, with lots of different layers and levels. This is to me what an English approach should be. We are not bothered by the fashions, it’s about the quality of the piece. For me, even an insignificant component under the dial, is as important as the case and the dial. I pay the same attention to every piece. We are concentrated on putting some of the making back into English watchmaking.” 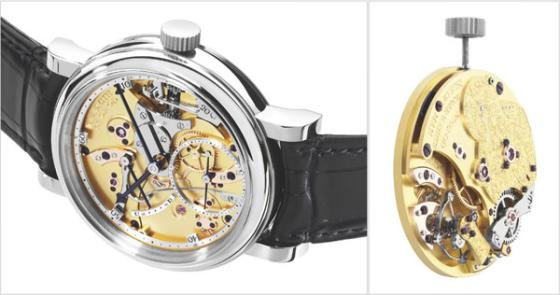 Smith, 40, first came to the Isle of Man to work with the famous George Daniels, the brilliant English creator of the co-axial escapement. When his time working with Daniels came to an end, Smith stayed on, using this beautiful island as a place to create his watchmaking masterpieces. Smith is still working with Daniels (they only live about 20 minutes apart) on special projects, and Smith has built his own brand into an independent standard bearer for English watchmaking - made in the UK.
Smith has orders for his hand finished and hand built watches for at least the next three years, and his goal is to get that order backlog down to two years. To date, Smith has delivered 40 watches, ranging in price from £72,500 to £114,000, with bespoke watches going up to £250,000.
Many thanks to Roger W. Smith and his lovely wife, Caroline, for their hospitality while I was on the Isle of Man. And cheers also to Jason Griffiths Motorcycles for the Triumph I rode around the famous TT course. 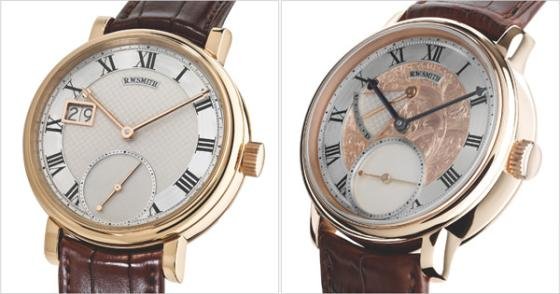