“The big brands are going to crush us. We are all going to die,” declares Antoine Preziuso, during a meeting with Europa Star in his atelier near Geneva, on the eve of BaselWorld. Proclaiming in a loud voice and without fear the concerns that many independent watchmakers and subcontractors quietly have, Preziuso does not mince his words. “Faced with this situation, we have to change our strategy. We can no longer be content to just make watches, as beautiful and as interesting as they may be, and then travel the world trying to sell them. We must ‘rationalize’ our way of doing things. We can no longer allow ourselves to distribute a few pieces here and there. We must understand and recognize the realities of the marketplace. We need to reduce our margins. In a word, we must adopt a more commercial strategy. It is either do that, or die.”
Put another way, the strategy proffered by Antoine Preziuso will necessarily restrain his fiery creativity. This is because Preziuso, who willingly puts himself forward as a watch “author-composer”, has never succeeded in confining his desire for the art of timekeeping. An insatiable creator and an explorer of forms and functions, he has never ceased producing the most varied models. He has never stopped exploring designs and complications. He has never paused in inventing new pieces. In short, he is a true forerunner in the art of time, a man moved by his passion, his desire to innovate, to research, and to experiment.
But the current downturn, marked by a strong consolidation of the large groups and their tight web of distribution, is no longer favourable to such creative adventures. For Preziuso, therefore, he must rethink his approach and actively delve into his own rich collections. In a word, he must ‘rationalize’ his way of doing business.
In concrete terms, this operation—which Preziuso feels depends not only on himself but also on many of his colleagues—has forced him to divide his activities into two parts: on one side is Haute Horlogerie, with daring, unique, and special models, while on the other side is the launch of a new ‘bout-ique’ line called ‘Power’. He explains, “When someone proposes an Haute Horlogerie piece, say costing CHF 200,000. Everyone along the chain has their margin to take. But for the more affordable or commercial pieces, under CHF 10,000, it is imperative that the production chain be rationalized, from the beginning design to the distribution of the final product. It is for this reason that I have drastically reduced the number of models that I was proposing [Editor’s note: besides his Haute Horlogerie models, Preziuso is conserving essentially his Star Moon line with its magnificent large moon, Moonlight with a very competitively priced steel line, and the Grand Robusto pieces].”
He goes on to clarify his intentions, “Now, I am concentrating on the new family of ‘Power’ watches. This is a very identifiable and recognizable collection, worked with great attention to detail, which over time will evolve, expand and diversify, all while maintaining its strong identity.” 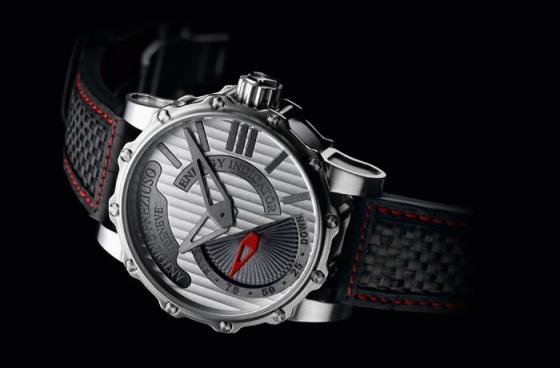 ‘Power inside’
Powerful (its case measures 48mm in diameter and 13mm in height), sleek (its bezel is held by twelve personalized screws and its sides are worked like those of a Doric column), very contemporary (its play on grey and red, its open-worked lance-type hands, its dial decorated with the Côtes de Genève pattern, its satined cartouches, its topstitched crocodile and carbon fibre strap), the Power is especially intriguing by the very large size of what seems to be the power reserve indicator, which takes up a good third of the dial. Yet, it is not a power reserve indicator in the strict sense of the term, but rather, as Antoine Preziuso eagerly explains, it is an “energy indicator”.
Marked with the indications, ‘Down’ at the bottom and ‘Fine’ at the top, this energy indicator informs the wearer about his physical activity, its vital energy. This means, therefore, that the wearer must have a new relationship with his watch, according to Preziuso. With its oversized indication of ‘Power Inside’, the watch is trying to have a real dialogue with its owner, telling him not so much about its own remaining energy levels, as it says about the energy used daily by the watch’s wearer himself. (You can see this creation for yourself at BaselWorld, at the stand of the Horological Academy of Independent Creators, ACHI).

Viva ETA
Faithful to his long-term supplier, Antoine Preziuso has equipped his Power with a movement based on an ETA calibre. “Of course, I greatly rework the basic movements that I receive. I regulate them with superlative precision. I change the oscillating weight. I decorate them in my own way. And, I work essentially with ETA bases because they are still, quite simply, the best movements that exist at this price point,” he adds.
With a healthy dose of courage, Preziuso is one of the few people to praise the ETA calibres, since so many others are claiming to have their own movement. “It is a question of longevity and respect for my clients. They can always maintain these movements and have them repaired if necessary, no matter where in the world they are, even in a hundred years from now.”
In his opinion, ‘Operation Power’ is essential in order to demonstrate that he wants to “take the lead, conquer new markets and find profitability worthy of this name”. With a smile, Antoine Preziuso admits, “In the end, this crisis was good for us. It made us come back down to earth and get our priorities straight”.