Christophe Claret launches his brand with a gaming spirit


Christophe Claret launches his brand with a gaming spirit

Christophe Claret is a frank person, and he does not hesitate to talk about his company’s situation. After a decline of 3 per cent in 2009, sales slumped even further in 2010—by 33 per cent—due mainly to the cancellation of projects aimed at developing new mechanisms for some of the most prestigious brands. With a heavy heart, Claret had to watch his employees dwindle from 125 to 90 today (through natural departures). Yet, Christophe Claret had anticipated the economic crisis and thought long and hard about how to get through it. Three avenues seemed reasonable to him: first, develop the subcontracting of components, that which allows him to have his own highly-developed industrial tool capable of creating movement parts as well as cases; secondly, develop innovative ultra-thin complication modules that could be added to high quality automatic movements (Piguet, Girard-Perregaux, Vaucher); and thirdly, develop his own brand, which could also compensate for the decline in demand for high complications. Thus, was born the Christophe Claret brand, legally distinct from the Manufacture Claret. 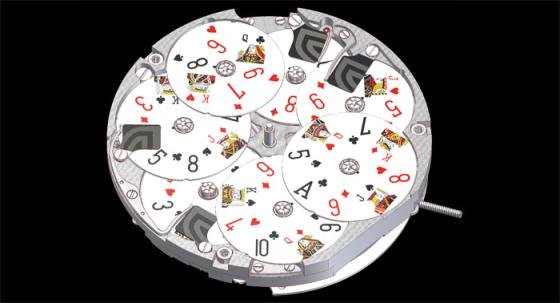 Playful timekeeping
The first tangible manifestation of the new Christophe Claret brand occurred last year on the 20th anniversary of the manufacture. Named the Dual Tow, it is a complex watch, selling for CHF 550,000. Claret is more than just a little proud of having succeeded in producing 20 pieces in just 18 months. And at such a price, there is no denying that its performance is really quite honourable. The new brand’s second watch, the Adagio, was just launched in Geneva in January (on this subject, see Europa Star 1.11). The third, the 21 Blackjack will be presented at BaselWorld.
Before describing this watch, let’s first say that it is emblematic of the direction that Christophe Claret has chosen for his new brand: pieces that will always have a very innovative mechanism or complication; a sales price of less than CHF 200,000 (the complications from the Manufacture Claret systematically sell for prices above CHF 200,000 and can go up as high as CHF 1 million); and, above all, have a playful element.
A ‘happy’ and often interactive type of watchmaking, Christophe Claret sums it up by saying that his timekeeping is “active, interacts with its wearer and is not purely contemplative”. He also wants his products “to be animated”.
The 21 Blackjack is a perfect illustration of this playfulness since the wearer scan enjoy three games of chance: dice, roulette, and of course, blackjack.

How it works…
Under the slightly smoked glass of the 21 Blackjack are cards that seem to be dealt at random and seven windows, of which three are open. The other four are covered with a ‘flap’ engraved with the brand’s logo. The first push-piece lets the cards be shuffled. During two seconds, we see the cards being dealt in all directions before stopping and moving into the windows, which is also accompanied by a characteristic sound. We then see the first three cards in the open windows. Using two other push-pieces, engraved with DEALER and PLAYER, respectively, the player and then the dealer show their cards: the first window opens and reveals the card, and so on. The idea is to succeed in obtaining 21. A ‘small’ additional complication: each time a player shows his card, a chime sounds. The hammer of this gong, engraved with the word HIT (characteristic of blackjack), can be seen in action on the side of the watch through an opening protected by a sapphire crystal.
On the other side of the crown, on the same side, another lateral opening shows two free dice. When the watch moves, the dice are shaken, giving an additional small game of chance. When the watch is turned over, the third game, roulette, can be seen. This is composed of a circle of alternating red and black numbers (as an additional small sophistication, this scale can be positioned when the watch is purchased so that the wearer can place his lucky number opposite an emerald set on the side of the case back). At the centre, the roulette wheel itself, whose ball is shown by an arrow, rotates freely, directly linked to the oscillating weight of the automatic mechanical movement (in this case, a Frédéric Piguet, chosen for its thinness, its performance, and its double barrel), which drives the 21 Blackjack. 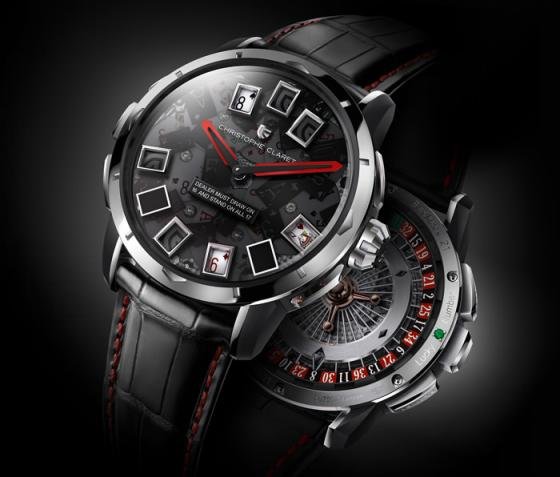 884,736 combinations
A veritable toy for (rich) boys and high rollers, this watch is all Claret. Especially recognizable is the mastery of its complex animations, which has made Christophe Claret’s reputation. The seven discs (magnificently printed with the motifs of the cards, looking as if they could had been hand-painted), offer a total of 884,736 possible combinations, comprising 45 cards out of the 52 in a standard game. The system designed by Claret includes a ‘launcher’ that arms a ratchet acting on a spring that launches the discs. Made in gold for their inertia, these discs are equipped with a pinion and are mounted on a double ceramic ball bearing. Because of the inertia and not having to use the torque coming from the barrels, the discs thus rotate very rapidly and stop precisely in front of the windows, thanks to a jumper. Another distinctive mechanism raises and lowers the flaps over the windows once the game is over. This flap mechanism acts directly on the hammer of the gong, making it resonate each time a card is shown. An additional difficulty that had to be overcome was having the commands for the chime coming from different locations in the movement, depending on the placement of the windows of the watch. In all, 501 elements had to be placed in the 45-mm case available in grey titanium, black PVD-treated titanium, and white or pink gold.
The price of Christophe Claret’s 21 Blackjack ranges from CHF 168,000 to CHF 198,000, depending on the version, each limited to 21 pieces, of course. Place your bets, ladies and gentlemen. No further bets.