The pioneering researchers of the UR-110


The pioneering researchers of the UR-110

Unquestionably, Urwerk is a case apart in the landscape of advanced creative watchmaking. No other brand has systematically carried out research that centres, not so much on the complications themselves, but rather on the display, something that is contrary to most other research endeavours. A priori, from a strictly orthodox timekeeping point of view, this quest seems less ‘noble’ than the others. Yet, it could very well prove to be just the opposite. In researching how to perfect and transform various types of displays, Félix Baumgartner and his inseparable comrade and designer, Martin Frei, have constructed very complex mechanisms that are unlike any other. They are clearing new virgin territories, with a rare consistency, thus opening original and unique avenues in the history of watchmaking.

Concerns for the display
An immediate demonstration of their savoir-faire in the domain of the display is seen when you try on their latest creation, the UR-110. Logically, it would seem quite complex, but with just a glance, you begin to understand: the reading of the time is immediately intuitive and easily done. In other words, one quick look and you get it, which is not always the case, in fact far from it, with all the other contemporary watch ‘UFOs’. Their concern for reading the time has been taken even further—the minutes appear engraved on a scale around the edge of the right side of the watch’s case in a sort of wide protuberance.
On the wrist, while the watch may be covered by a shirtsleeve, the minute scale is still left discreetly visible. A detail, you might say, but yet it is a significant detail (one we might add, in passing, that has already done well for someone like François-Paul Journe, who is also attentive to the hierarchy of reading time). 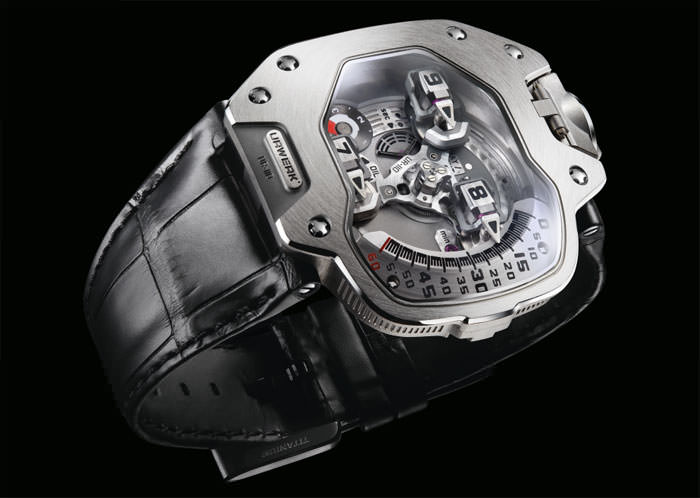 Tower, satellites and cubes
Still for all, while its utilization may be quite obvious, its construction is, on the other hand, extremely inventive and complex. Following their research on the use of orbiting satellite complications and reusing only part of the system of hour indicator cubes invented for the Opus 5, Félix Baumgartner has pushed the limit of mechanical sophistication even further.
At the centre of the device is a central tower, traversed by a fixed axis running the full height of the watch. This central tower maintains and stabilizes three mobile modules whose ro-tation is assured by a central carrousel. Each of these modules is mounted on a planetary gear and comprises an hour satellite indicated by a raised cube, a minute hand and a counter balance. The three modules are in constant counter-rotation, which allows them to compensate for the circular movement of the central carrousel and to maintain a position rigorously parallel to the entire length of their rotation around the watch.
So, wherever it is, the module always seems to remain in the same position. During this ro-tation, the hour indicator cube changes position and displays a new number (1 to 12). When arriving at the right side of the watch, the module with the hour cube and its minute hand follow the scale graduated from 0 to 60 minutes. In describing this amazing timepiece, Martin Frei says it all, “There are things happening on the dial that are not obvious at first glance. Every-thing looks normal. In fact, however, it is everything but, all while being subtle and fluid.”

Technical nature
The very technical appearance of the UR-110, the so-called ‘Torpedo’ piece, is reinforced by the very metallic treatment of its various elements mounted in a Grade 5 titanium case with a 316L stainless steel bezel or, in the black version, in an AlTin-treated Grade 5 titanium case. The dimensions—47mm by 51mm by 16mm—may seem large, but to the wearer, the UR-110 is surprisingly ‘stealthy’ and completely ergonomic.
Among the different details, we might mention the small seconds that seem to be ‘glued’ to the back of the dial (a small reproach in passing is that it is not always readable since it is covered by the passage of satellites, but then what would be another solution?). The crown located at 12 o’clock has a detachable protector in the shape of a small mobile valve. The back of the watch is also just as fascinating as the front, and offers an animated view of the small dual turbines that regulate the automatic winding system, letting it ‘brake’ in case of excessive winding.

Urwerk is also continuing its launch of the UR-202 and is planning to introduce a 55 UR-110 in 2011. As a reminder, this innovative brand employs only ten people, seven of whom work at the bench and two are engineers. But Baumgartner and Frei have always affirmed one thing: their liberty lets them remain at a level that allows them the full expression of their creativity…as this new exemplary creation brilliantly proves.