Passing into ‘second gear’, the young brand Hautlence (created in 2004) launches its HL2.0 collection, which spectacularly revives the art of reading time. And, at the same time, it has also invented a rival to the tourbillon.

Passing into ‘second gear’, the young brand Hautlence (created in 2004) launches its HL2.0 collection, which spectacularly revives the art of reading time. And, at the same time, it has also invented a rival to the tourbillon.

Other than the ‘pioneer’ Urwerk (created in 1995), very few watch brands concentrate essentially on the creative possibilities offered by the display. But, right from the beginning, Hautlence clearly expressed its desire to specifically target this area. Contrary to many master watchmakers who favour research on the movement, but consider its possible impact on the displays of being secondary in importance, Hautlence began by thinking about the display before examining how it would affect the movement. For Hautlence, designing new ways to read the time necessarily involves deep reflection on the mechanical design associated with it. These mechanical solutions would, then, dictate the final appearance of the display.

For the love of connecting rods
The brand’s particular ideas regarding displays materialized for the first time in 2005 with the presentation of the first Hautlence HL collection, with jumping hours, retrograde minutes and running seconds. The main innovation of the HL is in its system of visible connecting rods, directly driving the cam of the retrograde minute hand, then mechanically driving the jumping hour, at the end of the retrograde minute circuit. It seems a little like a 19th century locomotive, with its connecting rods and its pistons driving its metal wheels.
From this ‘matrix’ collection, Hautlence has offered its display designs in a series of collections: the very modernistic HL; the HLq for ‘Quantième’, equipped with a new round calibre developed entirely in-house and offering a time reading by different indications in sectors, while maintaining the command principle using a slide for the jumping hour and retrograde minute; and the HLc, a very lovely ‘classic’ version of the preceding timepiece. 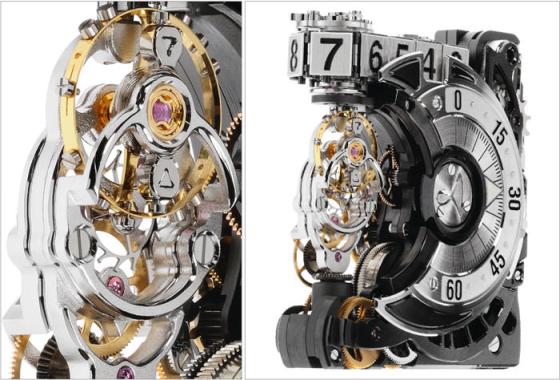 Radical choices
With the HL2.0, Hautlence is pushing its goals even further. The end results of the brand’s radical display choices, in purely watchmaking terms, are major, and forced the movement designers to look for new mechanical solutions. So, let’s take a closer look at this strange object.
All the architecture and mechanical design of the piece have been determined by a display involving a jumping hour in a window using a 12-link chain, located at the top of the watch. The chain is driven by a system of connecting rods and cranks that is so dear to Hautlence. The advancing motion of this chain causes a 60° rotation of the regulating organ that seems vertically suspended on the left side of the watch. Every 60 minutes, the regulating organ changes its position, thus providing for the famous statistical compensation of the effects of gravity on the regulating organ’s operation. To sum it up, the HL2.0 is a new type of ‘tourbillon’, which does not make permanent rotations but rather a ‘regular gyration’ at the rhythm of 24 times per day.
The chronometry of the timepiece is improved because of this, but in order to attain optimal chronometry, it was still necessary to regulate the possible perturbations caused by the energy required for this double animation. Thus, a second barrel was added, dedicated exclusively to the complication. Inspired directly by their first HL, the Hautlence designers reintroduced their system of connecting rods, sensor (feeling-spindle), and snail to transmit the energy from the barrel. Controlled by the speed regulator located at the centre of the retrograde minute display (and middle of the watch), this energy drives the chain that turns the regulating organ, without detracting from the chronometry, driven by another barrel. The entire system is wound automatically.

A remarkable case
The thought behind the display not only has mechanical consequences as we have just seen, but also aesthetic considerations. The HL2.0 thus takes on the allure of a veritable kinetic sculpture that is emphasized by the grey or pink gold case, open on all sides. Measuring 50mm high, 45mm wide and 17mm in thickness, the case has a curved diamond shape, as if sawed off at its two ends. Held between two asymmetrical thick crystals, whose sides are beveled, the case has a deliberately ‘rough’ feel about it.

Its formal minimalism contrasts sharply with the visual complexity of the movement enclosed in this bold case, which is water-resistant to 30 metres. The movement can be viewed laterally through a window situated above the crown. A choice of two interchangeable straps, alligator or rubber, are attached to the recessed screwed-in horns.
As Hautlence has announced, the HL2.0 is not an isolated example, but represents the first in a family of a new type of timekeepers. We can thus expect more design evolutions from the HL2.0 in the years to come. 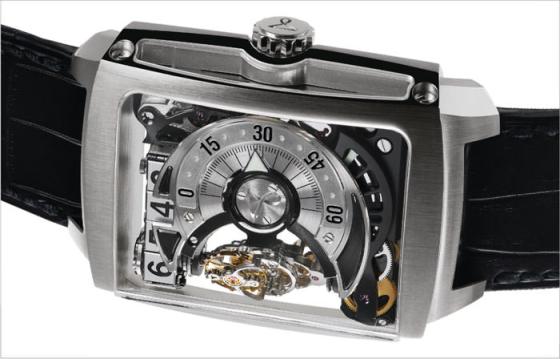