Raymond Weil is celebrating its 35th anniversary this year. Thirty-five years, and three successive generations are still at the helm. The honorary president is Raymond Weil himself who had the incredibly daring idea of creating his own brand in 1976, right during the middle of all the turmoil in the watch industry. Patiently, over time, Weil wove an amazing network of distributors throughout the entire world. Since 1996, his son-in-law, Olivier Bernheim, has been the Managing President, after having joined the company in 1982. He has expanded the international and widely recognized family brand even more. His two sons, Elie and Pierre Bernheim—the web 2.0 generation—have taken the brand into new paradigms of timekeeping.
In its own way, the Raymond Weil brand is an ‘anomaly’ in the landscape of Swiss watches, one of the rare family brands that is strongly anchored in a segment where the competition is fierce—that of stylish and quality watches at reasonable prices. This segment requires rigorous production, highly performing distribution networks, intense communication and rapid reactivity—in fact, very rapid reactivity, and on this point, family-run businesses often have the advantage. Raymond Weil clearly benefits from all these factors and has constructed what the family itself boldly calls—and not without pride—“an empire on a human scale”. 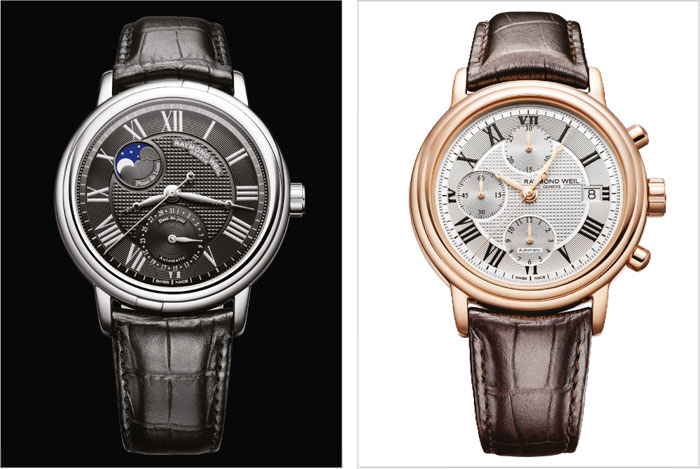 Music
This family of music lovers and musicians has also created a very particular universe around its brand, a thousand kilometres away from the worlds surrounding most other brands—the universe of music and art. For many years, the collections have had names inspired by opera or other musical works. Who doesn’t remember, for example, the Amadeus line, linked with the famous film of the same name, or other collections such as Parsifal, Nabucco, Don Giovanni, and Tango? The new generation, while continuing to focus on music, is opening up to other artistic endeavours, such as photography, for example, that is the subject of a large international competition launched by Raymond Weil.

On the occasion of this anniversary year, it was logical then for Raymond Weil to showcase its artistic proclivity with the creation of a limited edition Maestro Spéciale Anniversaire in 18-carat yellow gold. Driven by an automatic mechanical movement, this watch features a diameter of 39mm, day and month indicators in two sub-dials, lunar phases display, and a very classic guilloché-decorated dial.
This anniversary edition is the most prestigious model in the Maestro collection, a family of ‘neoclassic’ timekeepers in line with timekeeping traditions, with its classic lines, meticulous decorations and its harmonious proportions. Two models share the stage: the Maestro Phase de Lune, a 39.5-mm version in polished steel, with a RW4500 mechanical movement, dark blue dial, white hands and hour markers, date display at 6 o’clock, and moon phases at 10h30; and the Maestro Chronographe, a 41.5-mm chronograph in 5N pink gold, PVD steel, with a dial decorated with the Clou de Paris pattern, and three counters harmoniously placed at 6 o’clock, 9 o’clock and 12 o’clock. Raymond Weil has also introduced a new Maestro Lady, as well as a new feminine collection that will be introduced in July, called Jasmine.