The two pillars of Corum


The two pillars of Corum

Since he has taken the reins of Corum, Antonio Calce has been working twice as hard. His obsession: push as far as possible the coherence of his brand’s offer by re-centring the pieces around a few strong, identifiable, and immediately recognizable collections. This does not mean that he will neglect the veritable ‘treasure’ that lies in Corum’s archives, among them some very inventive and often amazing watches that attest to the incredible creativity that the La Chaux-de-Fonds brand has demonstrated for so many years. Corum regularly delves into this repertoire, re-editing pieces that are collectors timekeepers, such as the vintage watch presented this year named Grand Précis, equipped with a historic movement with a large balance.
But Antonio Calce is concentrating essentially on two main pillars that he wants to expand: ‘Bridge’, with the Golden Bridge and T-Bridge, and the ‘Admiral’s Cup’ family, now offering a large palette of products, ranging from the most sporty to the most elegant. 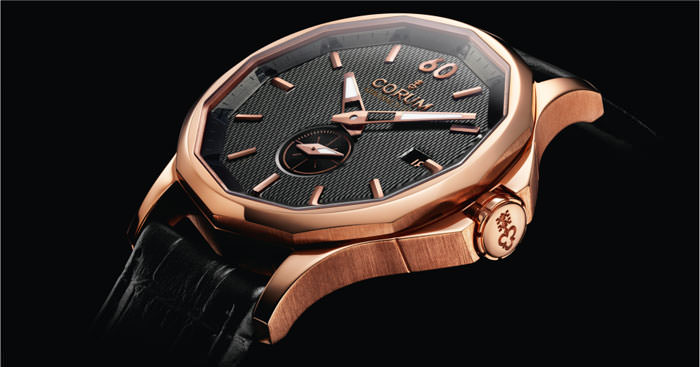 The three domains of the Admiral’s Cup
Born fifty years ago, the Admiral’s Cup collection is the main flag bearer of the brand. Sporty, elegant, and sometimes very specialized—we think notably of the famous Marées models—these watches, with a dial that has long sported the multi-colour pennants evoking the navy and pleasure boating, have largely been responsible for the rapid expansion and reputation of the brand. This was true during the days of the Banwart family as well as under the firm rule of Séverin Wunderman.
Gradually Antonio Calce is revisiting the basics of this collection, conserving, of course, the very characteristic dodecagonal bezel, while gradually eliminating the pennants until they disappear in the new collections, although they remain only as tone-on-tone blazon hour markers placed at the edge of the dial.
In this vein, Calce has created a complete collection that, while growing, offers a coherent watch that is classically elegant and suitable for any occasion, whether for sports, even ultra sports, or normal wear. “The Admiral’s Cup is now a total collection, the most successfully completed line that Corum has ever proposed,” explains Antonio Calce, adding that he has “created the collection to meet the demands of different types of clients, while strictly conserving the same DNA, and working in three domains: The Extreme, the Sport Chic, and Elegance.”

“The mother of all the collection”
As an example, let’s look at the two extremes of this collection. On one side is the Admiral’s Cup Defender 46, a burly line. And on the other side is the Admiral’s Cup Legend 42. It features a 42mm pink gold case, hand-finished gold dial decorated with a barley grain pattern, small seconds, date in a window, applied gold hour markers and chevrons, tone-on-tone pennants on the edge, sapphire crystal case back, oscillating weight engraved with Corum, and the automatic mechanical Calibre CO395 with a power reserve of 42 hours. These features have given the latest Admiral’s Cup a classically elegant allure, far from the rough seas. Even though this is the latest in the Admiral’s Cup line, we would say “that it is the mother of all the collection”, proudly adds Antonio Calce. 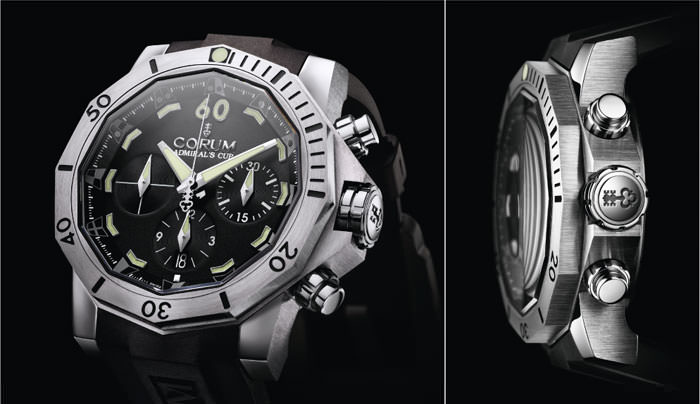 At the other end of the palette, the Admiral’s Cup Defender 46 shows another set of muscles, whether in the Dive version or in the Chrono Dive version. Similar to the Deep Hull 48 - 1000 metres line introduced in 2010, the new Defender 46 gives a strong impression of robustness, with the tight lines of the 46-mm titanium case, its black dial, and its vulcanized rubber strap. Another characteristic is the large crown protector in the shape of a pyramid that holds the crown, near which are two push-pieces for the chronograph model. An air of ergonomics and professionalism is evident, thanks to a readability that has been reinforced by the technical rigour of the dial, with its large luminescent chevrons, and the tone-on-tone pennants. The chronograph version is equipped with the COSC-certified automatic Calibre C0753, beating at 28,800 vibrations per hour, featuring a power reserve of 48 hours. The Dive model is equipped with the COSC-certified automatic Calibre C0947 with a power reserve of 42 hours. Both are water-resistant to 300 metres.
Between these two extremes is the Sport Chic collection, made up notably of chronographs that have undergone a major ‘design softening’, in a very lovely grey case whose dials are decorated with the Côtes de Genève pattern—a little extra sophistication. The same collection also includes very pretty feminine models, such as, for example, a chronograph whose bezel has been finely set with diamonds and whose counters are in mother-of-pearl.

Strengthening the bridge
For the other pillar of the brand, the Bridge, Antonio Calce has also sought to expand the offer by subdividing the collection into the Golden Bridge, the most classic, and the T-Bridge, the most innovative. He has made changes in the T-Bridge, introduced in 2005, by inserting a power reserve indicator at 3 o’clock, an anthracite grey back for more contrast, and a tinted sapphire crystal to make the piece more mysterious. The T-Bridge Tourbillon has also been revisited and is now offered in a gold version with a rubber strap or in a black version, or more precisely, a lovely dark grey gunmetal tone.
The same type of work was done with the Golden Bridge, which, in its tourbillon version, has very nice matching grey and gold. Above all, it is the launch of the Golden Bridge Auto-matic that we stress here. Corum is now equipping its famous manual-wound baguette movement with an automatic calibre, giving it a very interesting linear oscillating weight. This floating and airy oscillating weight is guided by PTFE Teflon-treated steel rails, with the contact zones between the rail and the carriage made of beryllium copper in order to optimize the system’s efficiency.
The transmission of the energy to the barrel—miniaturized to better work with the vertical architecture of the movement—is carried out by the intervention of a rack fixed to the oscillating weight and engaged with a reverser system equipped with ceramic ball bearings, thus offering 40 hours of working reserve. This exclusive Corum CO313 Calibre features a variable inertia balance and is housed in a new slightly rounded tonneau case in red or grey gold, measuring 37.2mm by 51.8mm. Four anti-reflective sapphire crystals provide a view into all the activities of the amazing movement. 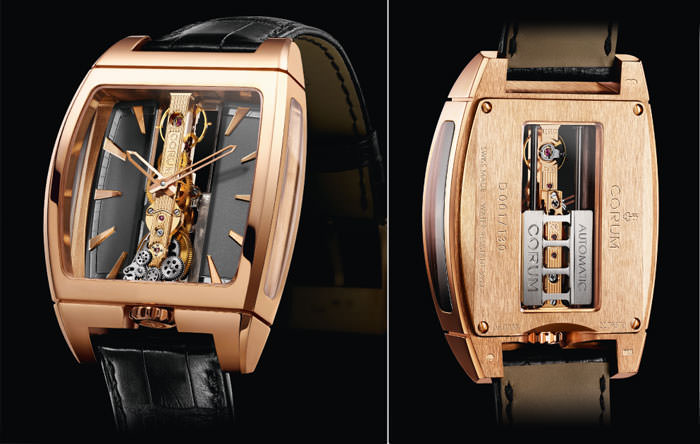