Armand Nicolet has weathered the financial storm and is well positioned for the future, thanks to its success with its vintage movement powered limited editions. “We are continuing and consolidating our image and position as a small yet sophisticated factory,” says Rolando Braga, President, Armand Nicolet. “We are the only one in the world that can offer unique products such as our Limited Edition collections, limited because they feature only original old movements available in our stock. These movements are tuned and updated to match today’s highest quality standards and then dressed with beautiful stylish cases, dials and straps.

“This is the direction we have been following for more than 10 years and will remain the same also in the future for two reasons,” he continues. “Because of the image and the success it has brought us and thanks to this type of work we have collected a huge practical experience that is necessary when you work with complicated mechanical movements and fundamental in the future in case we decide to develop and produce our own mechanical movements.” 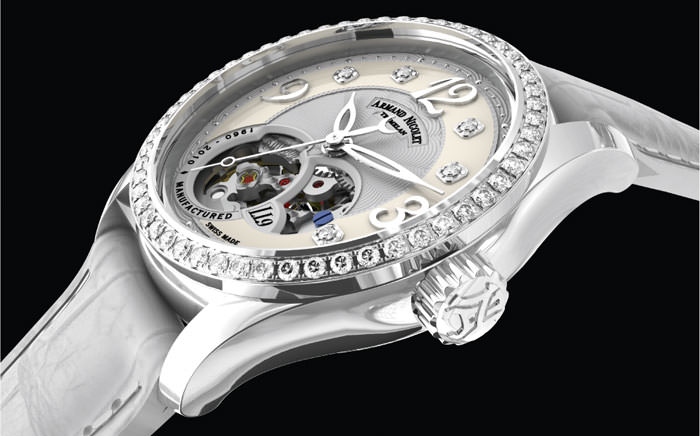 The S05 introduced at last year’s BaselWorld has been the best seller for the brand in 2010. “For this reason at the 2011 Basel Fair we will introduce a new exciting ladies version of the S05 collection - very beautiful models that we trust to be a new big success for Armand Nicolet,” Braga says.

Braga expects 2011 and beyond to be good for the watch industry. “After the big challenges that the 2008 financial crisis brought to the world and to our industry, just three years later and we can finally focus 100 per cent on the product,” he says. “2010 was a good year for us, we have already seen the results of the huge efforts we have put into our company to solve the issues the financial crisis caused.”

Focusing on diversifying in as many countries as possible is important for Armand Nicolet. “Our policy is not to have one market stronger than the other, but we always try to sell to as many countries (almost the majority) as poss-ible,” he explains. “This makes it easier to compensate for possible losses in some countries while other countries are doing better. In any case we have noticed that during 2010 some of the biggest markets in the world, like the USA and Russia, have started recovering a little from the crisis.”

Braga sees watch knowledge growing around the world, and customers are seeking true value. ”The expertise is increasing and people are buying products that have a real value, they aren’t just buying a brand name, which is good news for Armand Nicolet,” he says. “Big advertising and promotion seems to be important but it’s not enough to be successful, which is also good for us.”