It has been a great year for Philip Stein – fantastic new sleep studies, celebrity endorsements and brand new products to help everyone feel better.

It has been a great year for Philip Stein – fantastic new sleep studies, celebrity endorsements and brand new products to help everyone feel better.

Philip Stein is famous in the world of horology as the only watch company (at least to our knowledge), to introduce natural frequency technology into its timepieces to help improve sleep, reduce stress and enhance overall wellbeing. The technology works with a metal disc that is embedded with key frequencies that are beneficial to life and health. When wearing the watch the human energy field is believed to interact with the frequencies in the watch, making it bigger and stronger, which in turn, makes the wearer more resilient to stress.

Scientific studies
A recent scientific study carried out by Dr. Michael Breus PhD, a certified sleep specialist, reported that 47 per cent of people tested noticed that they were falling asleep more easily, 43 per cent said that they were feeling more refreshed when they woke up and 52 per cent described more pleasant dreams. Of all the people tested, 96 per cent responded positively to at least one of the natural frequency variables.

Star endorsements
And if scientific studies don’t get you excited, it is interesting to note that Madonna was so excited about her Philip Stein timepiece that she actually went out and bought one for the famous US television host, Oprah Winfrey. And Oprah was so impressed with her watch that she featured it on her show in front of millions of television viewers. The natural frequencies are obviously working on the company as well as its clients! 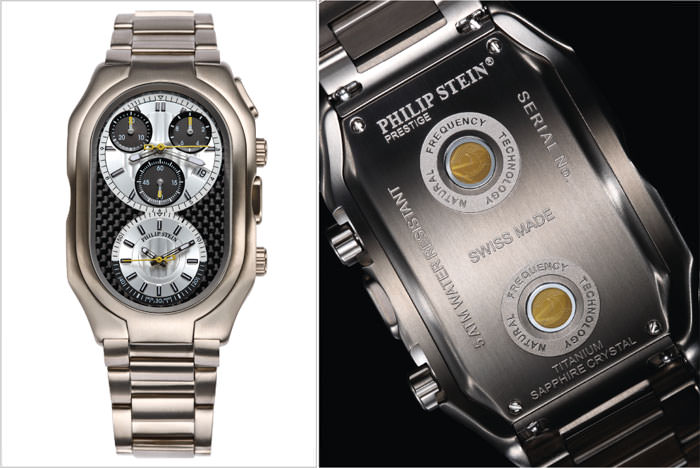 Believe it or not
But whether you believe it or not, Philip Stein timepieces have their own particular oval-shaped style that appeals to numerous watch lovers, regardless of the technology inside.
This year sees the launch of a new collection for the brand called the Titanum. This dual time wristwatch is equipped with two separate movements – an ETA quartz chronograph movement for the upper dial, which indicates the date and time and features a stop watch function (recording times to the tenth of a second), and an independent Ronda movement that powers the second time zone below.
The case is made from high-grade titanium and is fitted with sapphire crystals. As for the dial, a striking contrast is achieved with an outer black carbon fibre dial, a silver-coloured inner dial and charcoal grey sub dials that have a sand-blasted finishing.
An attractive timepiece, the Titanum will surely encourage new clients to go out and conduct their very own sleep experiments!