Until now, François-Paul Journe has never made a sports watch. “For the pure and simple reason that I don’t do sports,” he explains laughing. His clients are mostly made up of collectors, connoisseurs and simply fans of a type of fine watchmaking that is rather discreet without being puritan—clients who appreciate the mechanical sophistication that still draws from the living sources of classicism. As such, most of these customers are no more taken with the sports world than is Journe himself. If one or more were to decide to do some jogging, they probably would not do so with their Journe on the wrist. Unless…
Unless, a client is so passionate about these immediately recognizable timepieces that he does not want to stop wearing them, even when doing sports. Listening to these comments and complaints, François-Paul Journe took up the challenge and created, for the first time, a sports watch—and soon to be a whole sports collection: The LineSport. 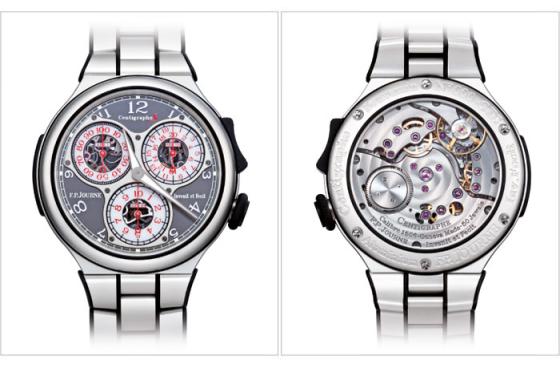 The lightness of aluminium
For this sporty exercise, of which he is not really accustomed, François-Paul Journe opted for lightness and robustness. Lightness: “I did not launch into a competition for lightness and, with its 55 grammes, it is not the lightest timekeeper in the world. But, I did not want to start hollowing out parts to gain a few grammes here or there. What is important is that one hardly feels the watch when it is on the wrist. To the point that the other day I said to myself, ‘Ah, I no longer feel my watch’ and when I looked at my wrist, in fact, I was not wearing one!” he concludes with a laugh.
François-Paul Journe uses special aeronautical aluminium that is easy to machine while still being very hard and very resistant. The case is made out of this material, as is the integrated bracelet, the plate, and the bridges. In order to eliminate any problems of electro-erosion, the screws and axes are made of titanium.
To better protect his watch against shocks, Journe thoughtfully introduced moulded rubber inserts and protections that extend slightly beyond the surface of the oxidized and vitrified aluminium case. These protections are also found on the sides of the case, around the thick sapphire crystal, and even between each of the articulated links of the bracelet (which has been very well designed). The result is a very wearable watch, measuring 43-mm in diameter, which is also very comfortable with its movable horns and the possibility of adjusting the bracelet down to the half link.
Even if it is 100 per cent ‘Journian’ and thus immediately recognizable, the dial of this first example of the LineSport, whose code name is CTS (for Centigraphe Sport) is also made in this same aluminium and has sapphire crystal counters. It also has, for the very first time, luminous numerals. ”It is a sports watch, but it remains a Journe,” comments the author.
The engine of this chronograph sports piece is the Calibre 1506, a manual-winding chronograph movement that equips the brand’s Centigraphe Souverain, which as its name indicates, displays the hundredth of a second thanks to a central hand that makes one rotation of the dial in one second. This chronographic mechanism has been patented for its specific configuration that allows the chronograph function to be isolated from the movement, thus suppressing all interference between the amplitude of the balance and the starting and stopping of the chronograph.
The system of toggle push-pieces adds an additional touch of sportiness to the new CTS. But still for all, François-Paul Journe does not intend to capitalize on sports watches, a sector that he judges as “way too crowded”. Rather, he wants to focus on the “active leisure” theme, which he will use in promoting his new aluminium timekeeper. Whatever the case, this first François-Paul Journe sports watch, labelled as ‘Number 1’, was sold recently at Christie’s in Hong Kong for the astronomical price of US$ 450,000—ten times its normal price. But it was for a good cause, since the money went to benefit the victims of the recent tsunami disaster in Japan. This good deed augurs well for the future.

Universal Coordinated Time ≠ Greenwich Mean Time
François-Paul Journe recently presented another innovation, the Octa UTC. It is based on the international atomic time, the UTC international divisions, for Universal Coordinated Time, which replaced the famous GMT (Greenwich Mean Time) time divisions in 1972, which were based on the earth’s rotation.
These two time zone divisions are similar, but the UTC offers “a modern division of time zones divided between full hours for the majority”. These time divisions are included on the dial of the Octa UTC in the form of a globe presenting the two hemispheres divided into highly coloured zones. On either side of a ‘0’ representing winter time, two +1/-1 graduations help to position the summer time linked to the geographical location of the wearer, depending on whether it is positioned east or west of the chosen zone. (Seeing it written seems complicated, but in actual usage, the adjustment of the watch is quite simple.)
The FPJ 1300-3 Calibre, an automatic movement with an off-centred oscillating weight (and single-directional winding equipped with a self-blocking system of ball bearings that can take advantage of each movement of the wearer), also displays, besides the 24-hour time zones, a large instantaneously jumping date and a retrograde indicator for the watch’s five-day (120 hours) working reserve.
Another particularity is that Journe describes this movement as being “modular”. Architecturally, it is the 1-mm plate that holds the dial that also supports the exclusive elements for this model. But, this is not to be confused with an ‘additional plate’. Rather, it involves more precisely a sort of ‘bridge’ that holds the gears on the movement side, while, on the dial side, it supports the elements used in the display of the power reserve and the date springs. Thanks to it, all the ‘modular’ movements that equip the entire Octa collection are compatible and can be mounted in the same case, regardless of their specifications and their complications.
Far from being anecdotal, this capability is precisely what makes the François-Paul Journe brand so timeless. We observed this recently as well, by personally visiting the totality of the Geneva manufacture’s collections. With no concessions to the vagaries of the marketplace or to stylistic one-upmanship—heaven knows how much turbulence has occurred in the market since Journe signed his first wristwatch in 1991, a Tourbillon Souverain that is still in the brand’s collections—François-Paul Journe has not deviated one iota. This is what makes him so prized today. 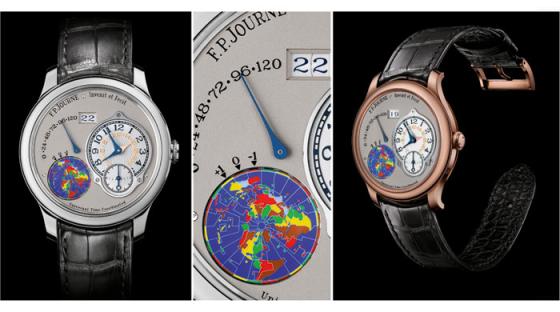