Emile Chouriet is a family firm with a difference


Jean Depéry comes from a family which can trace its history in watchmaking back to the 1700s, yet he chose the name of one of his ancestors’ customers, Emile Chouriet, for the name of the watch brand he launched back in 1998.

Emile Chouriet is a family firm with a difference

Jean Depéry comes from a family which can trace its history in watchmaking back to the 1700s, yet he chose the name of one of his ancestors’ customers, Emile Chouriet, for the name of the watch brand he launched back in 1998.

But his company owes as much to Jean’s great-great-great-grandfather François Dagobert Depéry, a contemporary of Jean Antoine Lépine, who was working as a master watchmaker in Challex, just across the French border to the West of Geneva, as it does to Emile Chouriet.
Emile Chouriet, like many other master watchmakers at the time, fled from France to Switzerland in 1685 to avoid religious persecution. As Jean Depéry explains, “A lot of watchmakers in the centre of Geneva in the early 1700s specialised in decoration and they worked with suppliers in the surrounding suburbs for their components. My great-great-great grandfather supplied Emile Chouriet with main plates and other components.” 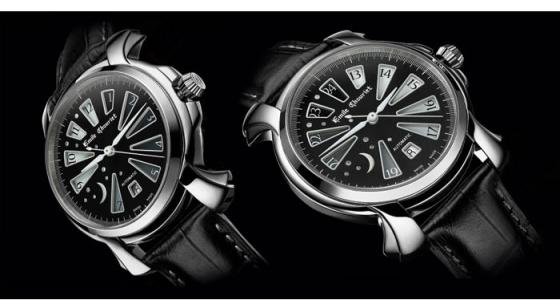 François Dagobert Depéry handed down his passion and knowledge of watchmaking to his family and it was undoubtedly with this passion in his blood that Jean Depéry started his studies in Neuchâtel to become a watchmaking engineer.
Jean Depéry entered the watchmaking industry at the dawn of a new era and found himself designing very high-precision micro-mechanisms. He contributed to the development of the micro motor used in all quartz watches today and also developed and created his own tools for high-precision machining and for assessing the quality and reliability of components.
Emile Chouriet has since been taken over by China’s Fiyta Group and it comes as no surprise, therefore, that China is by far the biggest market for Emile Chouriet watches, accounting for a staggering 98 per cent of the brand’s sales. In China, Emile Chouriet watches are in 150 points of sale, of which 70 are Fiyta-owned Harmony World Watch Centre stores. There is also an Emile Chouriet flagship store in Ningbo, with another one planned to open in Shanghai by early 2012. Distribution in the rest of the world is spread – “anecdotally” according to Jean Depéry – across individual boutiques in Dubai, Doha (Qatar) and Lucerne (Switzerland).
The distinctive design of Emile Chouriet watches is characterised by highly distinctive lugs, which are styled along the lines of the company’s winged-sceptre emblem and give the watch cases a unique personality. These lugs, which the company likens to a sculpted pair of falcon’s wings, feature prominently in the Les Ailes du Temps and Gold Prince models.

More recently, Emile Chouriet has focused on complications and – after two years of development work – introduced an original display module developed and manufactured entirely in-house. The new “Catch the Moon” model has a double display that changes to show daytime and night-time using two separate discs: one for 1am to 12pm and another for 1pm to midnight, using the 24-hour clock and subtly coloured to indicate day or night. The moon theme is reproduced on the black dial in the form of an applied crescent moon with 10 scattered diamonds representing the night sky.
Emile Chouriet covers a broad price range, offering watches from CHF 300 to CHF 70,000 with an average price of CHF 1500. These are currently assembled at the company’s workshop in Nyon, with the head office in the centre of Geneva. But new premises have recently been acquired in an industrial area in Zimeysa, outside the centre of the Geneva, where everything will be grouped under the same roof from early next year, which will put the company only a short drive away from where François Dagobert Depéry produced his components over 300 years ago.