Bédat & Co. cleverly bypass the need to name their collections by using numbers for them. This has the advantage of making them easily memorable in any language. But beware – the collections are not numbered in the order in which they are launched, so the brand’s first collection was – quite illogically – the No. 3. This underscores the timelessness of the collections, however, since there are no clues, either in the design of a model or its appellation, that indicate its age relative to any other models that Bédat & Co. manufacture.

The latest model in Bédat & Co’s No. 8 collection is also the company’s first ladies’ chronograph. Its stainless-steel case with polished bezel is set with 52 diamonds in a “snow” setting – a technique that uses different-sized tiny stones nestled close together to form a glistening carpet. The setting starts on the crown protector and at 3 o’clock on the case and then gradually peters out around the circumference of the bezel, disappearing completely by 12 o’clock and 6 o’clock to provide a subtle transition as the eye glides across to the opaline guilloche dial with its Roman numerals and chronograph counters.
The diamonds on the brand’s new Reference 315 in the No. 3 collection are equally striking but on this piece they cover every available surface on the tonneau case. A total of 390 “random” diamonds of different sizes are set on the stainless-steel case, with a further eight adorning the dial as hour markers, for a total weight of 3.955 carats. The opaline guilloche dial in this case has a pleasingly symmetrical triangle of numerals – Roman at 12 o’clock and 4 o’clock and the Bédat symbol, which consists of two opposing letters “B” forming a stylised 8, at 8 o’clock.
Like all Bédat & Co. timepieces, these new references are supplied with the brand’s unique AOSC® certificate (Appellation d’Origine Suisse Certifiée, or Swiss Certified Label of Origin), which guarantees that the watch has been assembled in Switzerland using a case, movement, dial and hands manufactured in Switzerland. The AOSC® carries a five-year warranty against any technical defects. The Bédat symbol is also used as the company’s hallmark and is stamped on all components which conform to the AOSC® criteria. 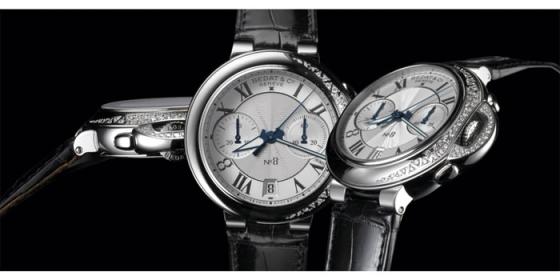 After a dynamic 2010, in which Bédat & Co. breathed new life into its American distribution network (which now counts some 70 points of sale), the brand more recently started working with a new European distributor and so far this year has opened new doors in France, Israel, Portugal and Spain.
Despite offering classic designs with an Art Deco theme, Bédat & Co. prove, with their proprietary certification and their novel system for naming collections, that they can be individualistic. The same applies to their sponsorship activities, which recently included the role as official partner of the European Junior Tennis Championships, where the brand awarded the winners, Roberto Carballes of Spain in the boys’ competition (who won both the singles and doubles titles) and Nastja Kolar from Slovenia with models from the No. 8 collection in order to inspire the champions of tomorrow.
As part of its continued worldwide development, the brand has more recently opened an official website in Chinese (http://cn.bedat.com) to support its entry into the Chinese market, which will be one of its focal points for the near future.