“Raymond Weil stands out because of its own efforts and not because we are attached to a large group,” insists Olivier Bernheim, who heads up the family brand with his two sons, and who wants things to be clearly stated and understood. The continued success of Raymond Weil—already for 35 years now—is taking place in the very difficult mid-range segment where the number of truly independent players is very small and where the quality must also be measured in terms of quantity. And, this success is totally due to the brand itself—to itself and to the hard and fast loyalty of an incomparable distribution network that has been patiently constructed over the years. (Raymond Weil is distributed in 128 countries).
“We are not technocrats, but rather, quite simply, merchants,” Bernheim says with a smile, quickly adding that he doesn’t “have a golden parachute. If the retailers have chosen to work with us, it is only because they believe in our models, in the balance of our offer, and in their own commercial interest. They do not carry our brand to ‘make anyone happy’ or because they are forced to. They have decided to work with us because they believe in us and they know us, in flesh and blood, because we are physically present on the markets and because our horizon is set on the long term.”

Swiss Made...
From his privileged position as a spectator of the global watch landscape, Olivier Bernheim offers a few general observations about the current evolution of the watch industry. What about Swiss Made, of which so much has been written? In his opinion (and his production is 100 per cent Swiss Made), this highly disputed term hides a lot of hypocrisy and encompasses many practices that are much less laudable than they seem. From a business point of view, the importance of this label is difficult to evaluate. “The essential is in the attractiveness of the models that are offered and in the confidence that the client has in the brand’s quality parameters,” adds Bernheim. “That is what really counts.”
In making a comparison with the automobile industry, he muses, “When you purchase a BMW, you expect that the car will meet certain quality criteria that BMW is known for. You don’t really care if the steering wheel was made in Portugal or if the other parts were made who knows where. You are buying, above all, the BMW ‘German’ quality. I am afraid that there is a certain type of arrogance in the Swiss industry that will one day come back to bite it. Switzerland is not open. Too often, watchmakers here believe that they are superior, but they should be very careful about having this attitude. Take, for example, the high value of the Swiss franc. It is like in watchmaking. It is due to the outside world, which seeks refuge in this currency, and much less due to our alleged interior virtues.”

...and the Swiss franc
As regards the strong Swiss franc, what does he think will happen if this situation continues? “Obviously, the current level of the Swiss franc puts enormous pressure on profits. The main risk, however, is that little by little we find ourselves out of range, in other words, the prices no longer correspond at all to the reality of the offer from the various brands. And this is all happening in the context of the crisis that passed from the banks and businesses in 2008 to the governments themselves today. This loss of confidence in governments and their economic policies clearly accentuates the decline in consumption. We saw it very well in Ireland, for example, where a number of retailers simply closed their doors. The same happened in Spain, where the collapse was total. Yet, for us in any case, this collapse was compensated by making major inroads into the Canary Islands. And do you know why? Because after the revolutions that rocked Tunisia and Egypt, the tourists moved to the Canary Islands…”
Clearly, having a global distribution network provides a rapid understanding and lucid opinion on the consequences of today’s economic and political convulsions. So, what about Greece? “Well in this nation, it is almost business as usual. The current crisis has not really changed things there. Just think for a moment—it seems that only some 14 per cent of the population pays taxes. There are the headlines in the newspaper and then there are the contrasting realities of the marketplace, which are sometimes totally different.”

The United States, bastion of the brand
To support his assertions, Olivier Bernheim takes the example of the United States, one of the bastions of the brand and whose management has been taken over directly by the family. “The crisis in the USA? It exists, that is for sure, but it affects us only very little. The American retailers are totally business-minded. If there is money to be made, they will continue and they will invest. In this case, it is not so much the product that counts as the brand, the work in the field, and the proximity. At the same time that we repositioned the brand with a strong accent on the mechanical watch, we re-qualified our entire North American distribution network. We entered into very prestigious stores while still favouring the independents everywhere. As one independent to another, we understand each other very well.” 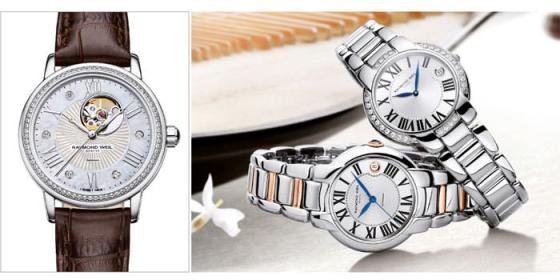 Expanded mechanical offer
The brand’s repositioning has led to a greater focus on mechanical watches, which now account for 75 per cent of men’s watches at Raymond Weil. (The share of mechanical movements in ladies’ watches is also steadily increasing).
The brand’s 35 years of experience in the market segment of quality watches at affordable prices has allowed it to offer “exceptional value for money,” explains Bernheim. This classic segment, he adds in passing, is “in full effervescence, not only because of the return to sure values, but also—and above all—because it is highly appreciated by the Chinese market. The Chinese consumer is looking for a classic design since, for most of them, it is their first watch.”
The latest example of this classic evolution is the new Maestro collection. It is a traditional collection, mounted on a leather strap, which offers a complete panoply of mechanical movements developed in collaboration with Dubois Dépraz: self-winding with small seconds, self-winding with date, moon phase, and chronograph. The very refined and chic ensemble, always below the size of 42mm in diameter and with careful attention to the décor (silvered or grey dials, clou de Paris decoration), is priced between CHF 1,250 and CHF 3,850, with an average price of CHF 1,850!
This rise in strength of the mechanical offer from Raymond Weil goes along with an increased effort by the brand to gradually acquire its own industrial tools. In this regard, it recently purchased the atelier that assembled 30 per cent of its production, thus now taking over more than 55 per cent of its own assemblage.

Eternally feminine
On the feminine side, which has always been one of the great strengths of Raymond Weil, is the new Jasmine collection, the latest leading light in this segment. Presented in steel, or steel and diamonds, or bi-colour, equipped with either a self-winding or quartz movement, the round Jasmine exudes great natural elegance. It has all the ingredients needed to become one of the brand’s classic timepieces.
Combined with a certain freshness, this classicism is emphasised in the new international marketing campaign that the brand is launching this autumn. Loyal to its exclusive musical universe, which has long been the cornerstone of its visual identity, Raymond Weil is proposing portraits of musicians—young and working in classical music—who seem perfectly in tune with the new strategies and goals of the Geneva brand.