DeWitt’s intricate Golden Afternoon ladies’ model draws its inspiration from the Pre-Raphaelite movement in order to pay a fitting tribute to the women for whom it is destined.

DeWitt’s intricate Golden Afternoon ladies’ model draws its inspiration from the Pre-Raphaelite movement in order to pay a fitting tribute to the women for whom it is destined.

The Pre-Raphaelite movement was founded in London in 1848 by a group of disillusioned artists and students of the Royal Academy of Arts, who rejected the approach adopted by the Mannerist artists who succeeded Raphael and Michelangelo and advocated a return to the intense colours and complex compositions of quattrocento Italian and Flemish art, hence their Pre-Raphaelite name.

In particular, the Pre-Raphaelites considered the classical poses of Raphael a corrupting influence on the academic teaching of art and also objected to the influence of Sir Joshua Reynolds–the Royal Academy’s founder–on the academic world. The founding artists, led by William Holman Hunt, John Everett Millais and Dante Gabriel Rossetti, were later joined by other peers to form a seven-member “brotherhood”. 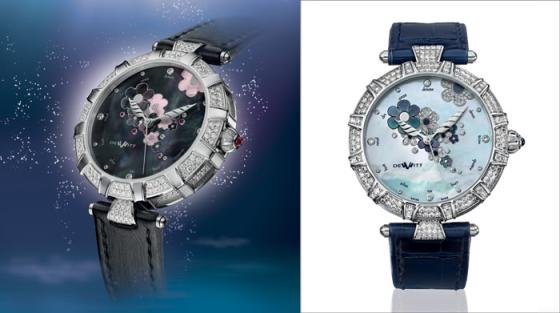 Julia Margaret Cameron, an early portrait photographer, was also influenced by the Pre-Raphaelites and developed a unique style of portraiture that was closely cropped, in soft focus and which emphasised the emotions of her subjects. Cameron’s sister hosted a salon at Little Holland House, which was visited by many artists. This gave the photographer many famous subjects for her portraits, such as Charles Darwin, Alfred Lord Tennyson and Robert Browning.

Cameron also had associations with the Pre-Raphaelite movement, through which she met fellow photographer Charles Dodgson – who was better known under the name Lewis Carroll. Dodgson had often used Alice Liddell (the inspiration for his “Alice” stories) as a child portrait subject and Cameron later recognised Liddell as the perfect Pre-Raphaelite portrait model.

The Golden AfternoonIn his preface to “Alice’s Adventures in Wonderland” Lewis Carroll recalls the moment he improvised the story to entertain the three Liddell sisters, Alice, Edith and Lorina, on a boat trip from Oxford to Godstow.

All in the golden afternoonFull leisurely we glide;For both our oars, with little skill,By little arms are plied,While little hands make vain pretenceOur wanderings to guide.

If you can conjure up a mental image of this idyllic riverbank scene on a golden afternoon and then compare it with DeWitt’s fully-paved timepiece of the same name, then you will find various similarities. Imagine the sky of a summer afternoon dotted with clouds, the wind blowing through wild flowers and water lilies gently bobbing on the river.

You will find all the elements of this scene beautifully created on the watch’s dial. Against the background of a mother-of-pearl dial (the sky and clouds), a mixture of diamond-set water lilies and colourful flowers have been applied in different sizes and with overlaps that create a sense of perspective and recall the slightly out-of-focus portraits of Julia Margaret Cameron.

The playful arrangement is complemented by diamond hour markers underneath which the hours are written out in French. Stylised angel wings as the hour and minute hands finish off the fairy-tale look of the Golden Afternoon’s dial. There are three different diamond-set models available, “soft” with 146 diamonds, “medium” with 287 diamonds and “full” with 412 diamonds. Add to this sparkle the mother-of-pearl dials in white, chocolate brown and black, together with the bold colours of the flowers on the dial and DeWitt has produced a wonderfully whimsical timepiece that exhibits all the Pre-Raphaelite values.