The very imposing UR-1001 Zeit Device condenses the last fifteen years of experimentation conducted by Urwerk into a time-measuring object with more than generous dimensions (106mm x 62mm x 23mm) and ample weight. It is neither a wristwatch nor is it a traditional pocket watch—unless you have a solidly re-inforced pocket. “It is,” as Felix Baumgartner (who manages Urwerk along with his partner, Martin Frei, in charge of design) says with a smile, “the Mother of all other watches, the Mother Ship of all the space shuttles that make up the Urwerk timekeeping fleet.” Except that this “Mother” has been born after its offspring, which is hardly conceivable in the world of living beings, but is perfectly acceptable in the world of advanced mechanics.

The UR-1001, which thus arrives on the scene after the various UR-101 and UR-201 models, marks an essential step for the brand in grouping together, in this new type of object, all the primary mechanical advances explored by Urwerk over the last decade. Limited to eight pieces, with a selling price of CHF 340,000 (a sum that Urwerk’s collectors declare to be “surprisingly inexpensive”), this “Mother” unites the brand’s style and its horological research by a number of functions and indications that come together to make a totally unique and original Grande Complication.

Rare are those timekeepers that indicate the seconds, minutes, hours, day/night, months, years, centuries, and even the millennium. And that is not all. To these temporal displays can be added indications concerning the working state of the piece: a power reserve (39 hours) indicator and an “oil change” indicator (every five years).

Delivered in an impressive presentation case, equipped with a system for automatic winding, the Zeit Device is thus ready to confront the next thousand years, during which the “Mother Ship” will certainly have launched many new “shuttles”. 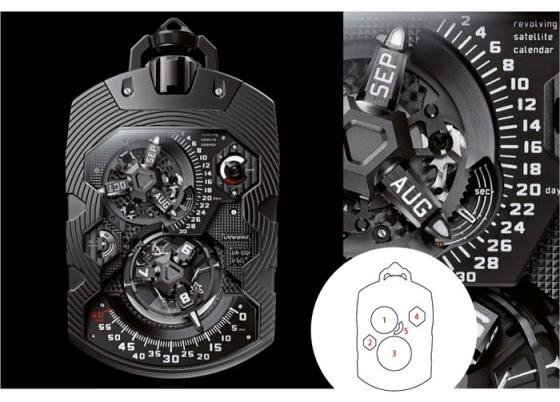 1. Revolving Satellite Calendar The Revolving Satellite Calendar is an ingenious device and is “simple” because it requires few pieces. The month indications are shown on the mobile satellites mounted on a carrousel with three arms. Three Maltese Crosses are mounted on the wheel that carries the carrousel. Each of these Maltese Crosses corresponds to a satellite of four months (one month per side) at the opposite end. At the end of the 30-day months, a finger on the Maltese cross advances the date wheel by two days to the first day of the following month. The date indication is shown by the tip of the satellite that points to an engraved scale. 2. Day/Night IndicatorThe Day/Night indication is given by a rotating disc coated half with Black SuperLumiNova for the night, and half with white ruthenium for the day. This indicator is especially useful for setting the calendar mechanism so that the date changes at midnight rather than midday.3. Hour Satellite Complication The rotating central carrousel supports three hour satellites with four faces, on which are marked the hour numbers. They position themselves at the beginning of the flyback minute scale, pushing a spring ring along a guide rail on which is fixed the flyback minute hand. When the minute hand gets to the end of the rail at 60 minutes, the star cams release the minute hand, which goes back to zero at the start of the scale in front of the next hour satellite. Hours and minutes can be set backwards without affecting the other functions.4. Power Reserve IndicatorThis indicator shows the amount of power in the mainspring, up to 39 hours. It features a red warning zone to indicate when the Zeit Device needs to be re-wound. 5. Seconds IndicatorThis indication is shown by three hands displaying 3 x 20 seconds over a 120° sector. 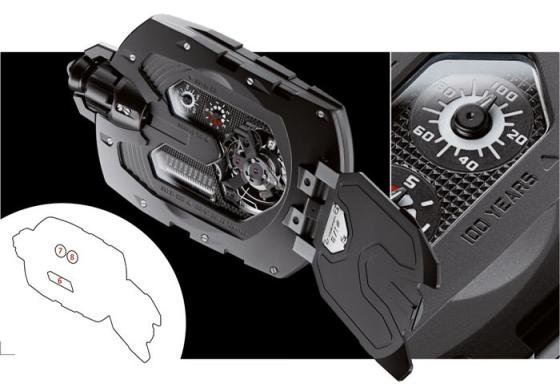 CaseThe case of the UR-1001 is made of stainless steel coated with AlTiN (Aluminium Titanium Nitride). Originally an industrial surface treatment material, AlTiN features superior resistance to oxidation and great hardness. Its semi-matte black colour gives the watch its hi-tech appearance.Use of ARCAPARCAP alloys are patented alloys that contain no iron and are thus non-magnetic. They are resistant to oxidation and chemical corrosion, are insensitive to temperature variations, and have very high tensile strength. This alloy thus has advantages over brass for making the plates, carrousels, satellites, dials, bridges, retrograde balance springs, and retrograde u-springs. Most of these pieces are machined by Urwerk.