Letter from France:
The watch that re-emerged from the depths

The boss of Hublot, Jean-Claude Biver, financed the “Antikythera” project, whose name is derived from the famous astronomical mechanism of ancient Greece. An exhibition in Paris now features a miniature replica of this antique device and its modern namesake that is worn on the wrist.

Letter from France:
The watch that re-emerged from the depths

The boss of Hublot, Jean-Claude Biver, financed the “Antikythera” project, whose name is derived from the famous astronomical mechanism of ancient Greece. An exhibition in Paris now features a miniature replica of this antique device and its modern namesake that is worn on the wrist.

Make a clean sweep of the present. Only the past is promising. The “Internationale” of the “sovereign debt” nations is the new refrain. Woe to Greece, which is falling into chaos. Well, yes, it was better before—over 2000 years ago—when the Hellenic civilisation radiated throughout the Mediterranean. On October 10, in Paris, at the Musée des Arts et Métiers (Museum of Arts and Crafts), formerly a royal priory, a watch—a large steel and gold vessel—re-emerged from the depths. Its name: Antikythera. Its manufacturer: the Swiss brand Hublot. Only three will ever be made.

It is a sort of replica of the famous astronomical calculator discovered in 1901 by Greek fishermen off the island of Antikythera. The Parisian museum is devoting an exhibition to the mystery of this mechanism, which dates back to the first century BC. Its remains, as fragile as old bones, are conserved in the Archaeological Museum in Athens.

Hublot’s boss, Jean-Claude Biver, in his role as patron, is getting a symbolic glory tinged with pride and irony from this adventure of “three, five million” (Swiss francs). “All watch brands date back to the 19th century,” he says, “but Hublot goes back to 87 BC.” That is some record to beat.

None of this would have been possible without the financial support of the Swiss brand (which is part of the French multinational LVMH group), which is getting communications mileage commensurate with its apparent selflessness. The collaboration between Greek humanities researchers, a French museum, and a prestigious Swiss watchmaker was highly improbable, but the overriding passion of Mathias Buttet, today Director of Manufacturing and R&D at Hublot, made it all happen. 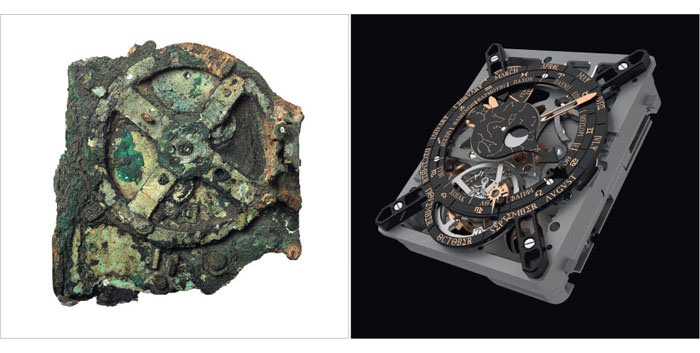 The story began in 2008 after Buttet read an article in the monthly French magazine Science et Vie, about Antikythera, astronomy, physics and the quest of a team of Greek scientists, led by Yanis Bitsakis, to learn more about the unique Antikythera—nothing similar has ever been found. “I fell in love with Antikythera,” reminisces Mathias Buttet, then director of BNB Concept SA, located in Duillier, in the canton of Vaud. “We have heard a lot of things about this movement, dating back to ancient times and undoubtedly designed by one of the descendants of Archimedes. I don’t see anything religious about it. This epoch was marked by empiricism. People noted their observations, day after day. Using a mathematical model, they could predict the eclipses of the moon and the sun.”

Like Indiana Jones faced with a great enigma, Buttet took it upon himself to miniaturise the original Antikythera—which was the size of a shoebox—so that it would fit into a wristwatch. His company, which employed 180 people, closed its doors in 2010, a victim of the financial crisis. But, there were still skills and knowledge up for grabs. Hublot, one of BNB’s biggest clients and located in Nyon, only five minutes from Duillier, hired Mathias Buttet and thirty of his associates. Along with them came the Antikythera project. “I told Jean-Claude Biver,” Buttet adds, “that he must not be a grave robber. That he should not make this watch into a commercial product, but rather create something in homage to our scientific ancestors, to our forefathers.”

Efthymios Nikolaïdis, like other of his Greek friends, had to eat his hat but he does not seem to regret this collaboration. “We are researchers in the humanities and do not have the habit of working with industrialists. Having said that, however, we have not had any public financial support for the last twenty years, and today, even less than ever. We therefore looked for sponsors.” And along came Jean-Claude Biver. Europe has returned to the time of the Medicis. O