Hartmut Rosa: The acceleration of time


Hartmut Rosa: The acceleration of time

“Run, run always faster, not to reach an objective, but to maintain the status quo, to simply remain in the same place.” The work of German philosopher and social theorist, Hartmut Rosa, entitled Beschleunigung – Die Veränderung der Zeitstrukturen in der Moderne [to be published in English by Columbia University Press in 2012], discusses this paradox. As the pace of material, economic, and cultural life becomes ever faster, as we have conquered the instantaneity of information exchange and acquired the possibility of travelling at speeds hitherto unimaginable, we have the impression that nothing is moving, that we are simply walking on a treadmill. Rosa explains that for the first time in 250 years, people in the Occident today do not expect a better life for their children, but fear just the opposite, that their life will be more difficult. If we want to avoid things getting worse, we must, every year, run ever faster, increase our efforts, innovate even more. The current crisis in the euro zone is a fitting demonstration. Political actions no longer tend to create a better society—no one promises that to anyone—but focus rather on staving off crises, adapting as fast as possible in order to avoid the worst. While we do not cease to gain time, to accelerate the flow of money, the rhythm of production, the exchange of information, the movement of goods and people—while everyday we gain time over time—we still have the impression that there is less and less time, whether on a personal, social, economic, or political level. It is this ambivalent logic created by the acceleration of time that Hartmut Rosa seeks to describe.

Rupture of the horizonHartmut Rosa does not discuss the nature of time itself, leaving this question to others who, since the dawn of history, have arrived at very different answers. [In passing, we cite the most famous response of them all, coming from Saint Augustine: “What then is time? If no one asks me, I know what it is. If I wish to explain it to him who asks, I do not know.”] Rosa tries to understand the effects—the political, ethical, cultural, and social consequences—of the rupture that is produced between “classic” modernity, the modernity of “progress,” happening in a linear manner and directed towards a better time (whether it be capitalist or Marxist), and the “postmodernity”, in which time is no longer seen as a course moving towards a pre-determined objective, but as an instantaneous flux flowing towards a direction that remains uncertain. The idea of acceleration was born with modernity, but we can discern two great periods or two distinct sequences. As the above projection shows (Harvey, 1990), beginning in 1850 with the invention of the steam engine, the acceleration in transportation singularly reduced space, even gradually “annihilating” it. In this progressive conquest of space-time, the universal coordination of clocks played a central regulating role. [It was not by chance that Greenwich Mean Time, or GMT, was adopted for the first time in 1847 by the Railway Clearing House, before it spread out to the entire world.]For examples of this radical transformation of space, we can simply look at our observations when we walk through a space that we can touch or feel, or travel in a car on a motorway where the passing space becomes no more than an abstraction, tracing out a line that we pass over as quickly as possible. For the passenger in an aeroplane, this abstraction of space becomes complete, since the trajectory is no longer calculated in miles but rather in hours. The person in the car or in the plane is, however, heading towards a horizon, towards a goal. In both cases, they are following a linear path of time. 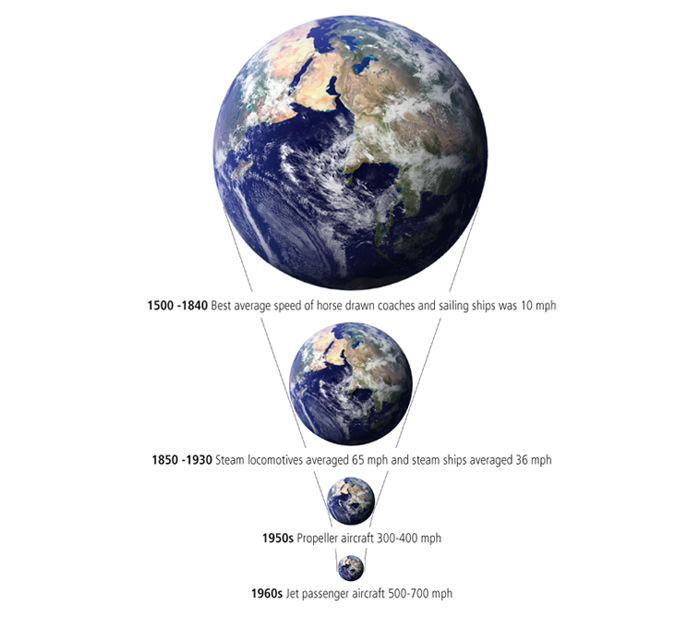 Second accelerationAt the end of the 1980s, we began to see a new acceleration, one that, according to Rosa, reached a critical point in terms of a reversal in our Western societies, both for the individual and for society as a whole. This second acceleration, which led us into postmodernism, took on great importance in 1989 with three major historic revolutions: the political revolution that brought down the Soviet Union; the digital revolution with the development of the Internet; and the economic revolution with its flexibility and its “just in time” approach. Today, if we were to complete Harvey’s projection, our planet would merely become a tiny dot, at least for all that concerns the transmission of information and financial exchange, which are conducted in real time. We call this second acceleration “globalisation”. The social and cultural repercussions of this suppression of space—or of this compression of space-time—are countless since, again according to Rosa, the virtualisation and digitalisation of previously material processes have simultaneously resulted in an acceleration of production, distribution and consumption. The machine cannot help but race out of control. The linear social time regulated by our clocks has been replaced by “timeless time”, an incessant deluge of de-territorialised flows (of capital, goods, people, ideas, as well as diseases and risks), which are springing up everywhere. Events no longer happen in sequence but simultaneously, “placing society in an eternally ephemeral state”.

DesynchronisationsAs we might very well imagine, the consequences of this fundamental transformation in our relationship with space-time are quite important, whether for the individual or for our social, economic, political, and cultural organisation. Like a racing car that creates air currents as it speeds by, this acceleration of everything—temporal instantaneity and spatial contraction—whose other name is globalisation, results in a number of desynchronisations. Or, as some sociologists explain, acceleration results in a rupture, “an existential rupture” of time.“A few years ago, people were already talking of a two-speed society. Since then, one part of society feels that it is no longer just marching on the spot, but that it is actually moving backwards, because the other part is moving forwards,” explains Alain Mergier, co-author with Philippe Guibert of a book entitled Le Descenseur Social (“Downward Social Mobility”).This impression of a rupture in time, resulting in multiple desynchronisations, is felt even more strongly because these accelerating forces seem to be moving so rapidly that they have become autonomous and totally liberated from linear time. The acceleration that these forces impose on economic and technological development thus creates a growing desynchronisation with democratic politics because, in the post-modern mindset, “the procedures necessary for this form of politics require too much time”. Rendered incapable of braking or regulating, or even accompanying or modifying this acceleration, democratic politics sees itself more and more discredited, powerless.This feeling of political impotence, coupled with the acceleration of change, affecting individual rhythms and lifestyles as well as the family structure, work environment, education, and culture, is aggravated even more by the acceleration in the destruction of the natural environment. Modernity has advanced towards the horizon of increasing progress; postmodernity, where everything is accelerating, seems to have passed to the other side of the horizon. “Movement is not going towards an objective; it has become the objective in and of itself,” explains Hartmut Rosa, who believes that another symptom of this situation is that, today, it is much easier to imagine the end of the world—from a nuclear, viral, or ecological disaster—than to imagine an alternative to the dominant system of acceleration.

Racing stagnancyIn the mind of Hartmut Rosa, the ultimate paradox of this acceleration is that it ends in what he calls, according to French sociologist Paul Virilio, “the situation of racing stagnancy”. To describe this situation, he borrows the image of the planet “Texlahoma” from science fiction writer Douglas Copland, where time became suspended in 1974, and the planet was transformed into a single giant shopping centre. To illustrate this same idea, we also could evoke another parable, the one developed by the popular 3D animated film, Wall-E, in which the humans, while waiting for their planet to be cleaned up by robots, had become fat and moved around only in flying chairs, doing nothing, existing in a state of “racing stagnancy”. Another name for death… Four scenarios to end accelerationAt the end of his book, Rosa envisions various hypotheses for ending acceleration. Contrary to the happy ending in Wall-E, he is pessimistic. He wonders how acceleration can continue, and how it will end. Does it have a sort of quasi-natural “gravitational point” towards which it is irresistibly drawn? Can we imagine alternate forms of equilibrium between movement and immobility? Rosa proposes four scenarios that might end acceleration.

His first hypothesis involves the elaboration of a new form of institutional control and stabilisation of the acceleration process, which would result in a new equilibrium at a higher speed. To accomplish this, it would be necessary to replace the social, political, and legal institutions—both individual and national that have become too slow—with more dynamic arrangements capable of reconciling modernity (finding the horizon) on an individual and political level with the speed of postmodernity. But Rosa himself hardly believes in this reform scenario, as he does not see how it could be put into place politically. He doubts that, even if such a “second modernity” were to be accomplished, it would be able to resist for long the new forces of acceleration that most assuredly would arise.

The second hypothesis is the definitive abandoning of modernity. This would give birth to a new form of (sub)politics having renounced all ideas of autonomy and governance, accompanied by new notions of the perception and assimilation of speed. It would also entail new relationships between the individual and the society, which, by definition, are impossible to predict with any kind of precision. Even so, the problems of desynchronisations discussed above would not go away, and the end of acceleration would still not be in sight.The third hypothesis, contrary to the preceding one on all points, involves an “emergency stop”, or an attempt to impose organisational controls on the forces of acceleration that are moving towards autonomy. This possibility, which seeks to regain a measure of humanity as in classic modernity, requires determined political intervention to force a resynchronisation of the fast-moving functional systems. Rosa judges this vision as being deeply unrealistic in light of the unpredictable economic and social costs that such a resynchronisation would entail, plus the fact that it is not clear what would be the political and institutional vehicles of such a radical and revolutionary departure, of such a revolution against progress.

The most reasonable hypothesis, in Rosa’s mind, is one that is extremely pessimistic. It involves a furious race to the abyss, ending in the “racing stagnancy” mentioned above. He assumes that modern society will ultimately pay for its loss of ability to balance the forces of movement and immobility by provoking nuclear or climatic disasters [as a reminder, his book was written before the Fukushima catastrophe] or by developing new diseases that will spread at lightning speed. Modern society will thus see new types of political collapse and the eruption of uncontrollable violence, particularly where the masses excluded from the processes of growth and acceleration rise up against the accelerating society.

Final disaster or radical revolution, Rosa admits that in both cases, there will be an extremely disturbing end. Yet, it is this disturbing thought that might incite creative contemporary social theory to imagine a fifth hypothesis to end acceleration. We do not yet understand the details and it will certainly be a very difficult task, but one that Rosa hopes will arrive in time. To recall the words of French sociologist Pierre Bourdieu: “We needed to understand the laws of gravity in order to construct aircraft that can overcome them effectively.” Similarly, in trying to understand the law of acceleration, Hartmut Rosa’s book is an indispensable tool to better confront it.