For many companies, the idea of incorporating liquid into a mechanical watch has been very intriguing. I first heard the idea four or five years ago from a young designer who was trying to figure out exactly how to do it. Since then, rumours have circulated throughout the watch industry of several companies working on a mechanical watch that uses liquid in its display.Well, Vincent Perriard and HYT have beaten everyone to the punch, introducing the H1 from HYT at BaselWorld. Perriard was informally in Geneva in January to talk about the concept, but BaselWorld is the first place that a prototype will be available to see and touch.The H1 features a circular sapphire crystal capillary tube through which oil is pressurised, via high-tech bellows driven by a bespoke mechanical movement by Jean-François Mojon and Chronode. Part of the oil is fluorescent green to indicate the hour, while the other part is transparent, and the oil retrogrades back to zero every 12 hours. Due to their unique properties, the oils will not mix, making the hour reading extremely simple. The minutes are indicated by a traditional hand.

The concept“Our goal was to make a watch that made competition irrelevant,” Perriard says, smiling. “We are in a place where no one else is, capturing a new market. This watch is so innovative and totally different, I just present the watch and it sells itself.”“Most people think the watch is way more expensive than it is, which is a pleasant surprise and good for us as a company,” Perriard continues.The H1 will be available for delivery by Sep-tember of this year, in an estimated limited production run of 180 pieces for the first year, for CHF 39,000/USD 45,000 and Perriard is taking orders at BaselWorld. 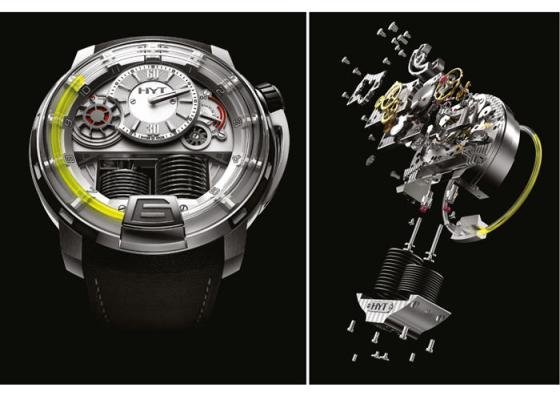