Century, based in the small town of Nidau, just next to the major watchmaking centre of Bienne in Switzerland, serves up two new models for ladies whose designs could not be more different. Yet both of these models presented at BaselWorld mix the brand’s signature sapphire crystal with gem-set dials and sultry hues on the bracelet and dial to point out their watchmaking trend for 2012.Sapphire crystal is used in watchmaking to provide a hard, light, tough and scratch-resistant (it can only be scratched by a diamond) cover to a watch’s dial. But Century takes things a step further by making entire bezels out of the same material, using their own patented processes. All of Century’s sapphire crystals are cut and polished in-house by hand and their facets have become a distinguishing feature of the bezel on the brand’s watches. 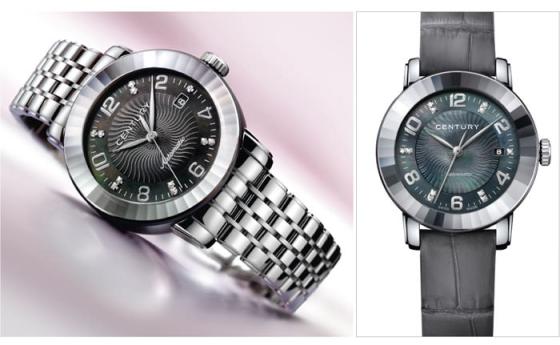 New ladies’ modelsThe first of the two new models for this year is a new reference in the Elegance collection that perfectly captures the trend towards classic designs, with a round stainless-steel case and a round Century sapphire crystal bezel with 48 individual facets. It is also Century’s first ladies’ watch to use a mechanical movement. The grey-toned mother-of-pearl dial with its sun-ray effect radiating out from the centre marries beautifully with the palladium radiance of the sapphire crystal and is further enhanced by 11 diamonds (approx. 0.033 carats) set on the dial as markers for the odd hours, with the even hours being indicated by applied Arabic numerals. The Elegance ladies’ timepiece is powered by a self-winding mechanical movement and is available with either a matching stainless-steel pin-and-link bracelet or an alligator leather strap in the same colour tone as the dial.Century offers a more fanciful piece with the new Ballerina watch, which is inspired by the poetry of movement found in the world of ballet dancing. An unusual pear-shaped sapphire crystal bezel with 50 facets forms the centrepiece of this watch, beneath which the 18-carat white-gold case is set with 87 diamonds (approx. 0.311 carats) in a glistening snow setting on pointed sweeps that follow the contours of the case. A further 41 diamonds adorn the sun-brushed slate-grey dial as hour markers, with the indications for 12, 1 and 2 o’clock following the elongated shape of the dial. An additional diamond is set into the slightly off-set crown below 3 o’clock. The new Ballerina is powered by a quartz movement and is available with a matching alligator leather or satin strap. 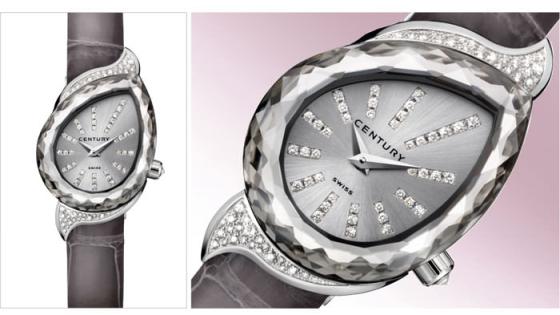 A new Century materialCentury has also launched a new GMT version of the Elegance Chronograph for men, which was featured in the pre-Basel galleries in the previous issue of Europa Star. This model, in 18-carat red gold, has a large 44mm round case with a bezel consisting of a Century sapphire with 48 facets cut and polished by hand. It is powered by a COSC-certified chronometer movement and has an alligator leather strap with deployment clasp. Century will also launch a new line of secret pendant watches at BaselWorld and the brand is keeping its trump card for the fair itself, since it will be presenting an entirely new Century material.

Expansion and own-name boutiquesCentury celebrated the 20th anniversary of its Tokyo subsidiary Century Time Gems Japan in style last year with a new boutique in Tokyo’s prestigious Ginza district that was developed in-house, from the choice of materials to the design of the furniture. The brand plans to open further own-name boutiques and shop-in-shops in prime locations worldwide.“We will continue to apply our philosophy, which is to value all of our retail partners by considering each one to be unique—just like our watches,” says Century’s CEO, Philip W.A. Klingenberg. “As one of the last Swiss family-owned, independent companies, we hope to enjoy long-term relationships with our retail partners.”“Our strategy is to increase our retail presence at prestige locations in capital cities and to expand our distribution network by working with additional established distributors for strategic and important markets.”

It is clear that Century will have plenty to talk about with visitors to its stand at BaselWorld.