The times they are a’changing for Peter Speake-Marin. He is moving away from the focus on Peter Speake-Marin the watchmaker and putting it on Speake-Marin the brand.The newest piece is the Renaissance Tourbillon Minute Repeater. Says Speake-Marin, “I wanted a bold statement watch that encapsulated what Speake-Marin is, something which incorporated elements from my previous work and projected them in a single piece, both complications, the foundation watch and the engraving work all wrapped in the Piccadilly case. This then marks the beginning of a new period in the development of Speake-Marin, moving away from being Peter and directed to become the Speake-Marin brand.”The Renaissance Tourbillon Minute Repeater, featuring a striking open-worked dial, is limited to six pieces for the world. “I hope that as with the Shimoda and the Serpent, this piece will garner a reputation as being an iconic timepiece marking this new period for our brand,” Speake-Marin says. 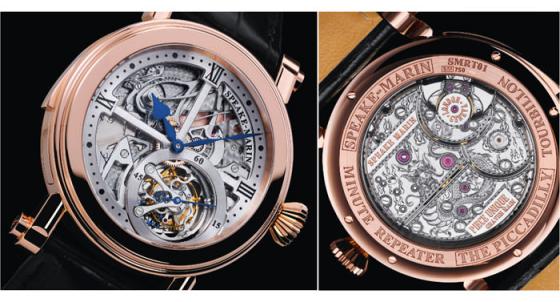 The back of each Renaissance movement is decorated with a different intricate hand-engraved design making each one a unique piece. “I designed the back movement bridges so that the whole of the surface of the back of the Renaissance is like a canvas where I could fully maximize the possibilities of engraving,” Speake-Marin details. “It gives me the liberty to be able to explore many different artistic avenues. For myself, these unique hand engravings complete the Renaissance on both technical and aesthetic levels.”“Engravings of this sort are also a classic Speake-Marin element,” he continues. “Many of the early pieces I created were dragon-orientated, working with either Japanese artists or European engravers but often in an Asiatic style and the first two Renaissance pieces bear beautiful dragon engravings. Although my style is very gothic, I feel that it complements that type of art well.”

Good timesTimes have been good for Speake-Marin re-cently, with 2011 having been the brand’s best year ever. The brand is now developing new collections and making an evolution in watch design and production much influenced by the success of Speake-Marin’s Marin-2 Thalassa.“2012 is likely to be even better for us although my impression is that the industry as a whole may be unsure, as selling small numbers of high-quality watches is easier than selling a mass volume product in a market that remains volatile,” Speake-Marin points out. “I think in general prudent remains a key word in relation to optimism.”