Devon – one year under its belts


Devon – one year under its belts

Devon turned heads with its first watch, the Tread 1, and now the company is back in Basel with the Tread 2, using the same belt drive system as before, but in a different configuration.

“The Tread 2 uses the same ground-breaking movement technology as first seen in our debut timepiece, which was developed within the United States Aerospace industry by people who supply technology and know-how to companies like Boeing, the US Military and NASA,” says Ehren Bragg, managing director of Devon Watches. “The Tread 2 has a smaller, sleeker design than the Tread 1 and incorporates innovative features like a one-of-a-kind clamp system that secures the bezel onto the case. Rather than using a standard crown design on the Tread 2, we’ve included an articulating arm that is used to interface with the electronic brain of the watch.” 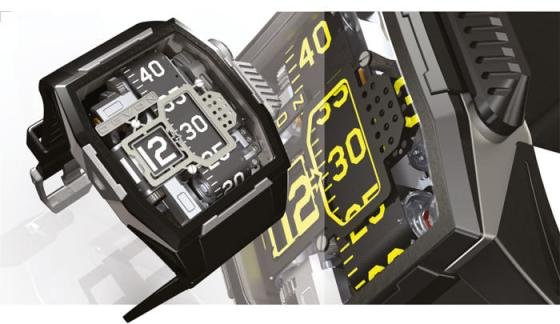 Both the Tread 1 and Tread 2 timepieces showcase an intriguing mix of mechanical and electronic technologies, which was embraced by retailers and press at last year’s BaselWorld show.

“Last year was our first year exhibiting at Basel and the experience was overwhelming,” Bragg explains. “The press, retailers and collectors in attendance told us that the Tread 1 was a truly innovative and different timepiece. This year we hope to prove that Devon is serious about making a lasting impression on the watch world by launching our second distinct line of timepieces.”

So far, Devon has sold more than 400 pieces of the Tread 1 and the company has 60 retailers in 15 different countries. “We’ve kept the value of the Tread 1 high by judiciously limiting our production and retailer inventory,” Bragg details. “There are certain markets where we would like to add retailers. We are not interested in adding additional retailers where we already have points of sale because we know this could encourage competition on price. Instead, we want to add retailers in world markets which we don’t currently serve such as the Middle East, India and the Far East as well as the United States’ Pacific Northwest.”

The future looks bright for Devon, due to its unique offerings. “We believe we’ve only just scratched the surface of consumers’ brand awareness about Devon and our timepieces,” says Bragg. “As we sell more watches and get the word out, we hope to create a need in people for a timepiece which is truly innovative, different and eye-catching. We’re already working on a completely new model which will follow-up Tread 1 and 2 using the same Time Belt system in a way that hasn’t yet been seen. We have a lot of tricks up our sleeve,” Bragg promises with a smile.