James Bond has worn an Omega Seamaster Professional diver’s watch in every Bond film since GoldenEye (1995). It is perhaps for this reason that the legendary “Bond watch” has maintained its original design, characterised by its patented screw-and-pin steel bracelet, within the Seamaster collection for the past seventeen years, while other models, such as the Aqua Terra and Planet Ocean lines, have evolved around it.

This year marks the 50th anniversary of James Bond films and the 23rd instalment in the hugely successful EON Productions franchise, Skyfall, will be launched in autumn 2012. To celebrate half a century of the suave spy regularly saving the world, Omega has produced special limited editions of Bond’s watch of choice in ladies’ and gents’ sizes. Both models feature a black dial with the 007 monogram and a red “50” on the ceramic insert of the rotating bezel in commemoration of this important anniversary. The gents’ model has a 41mm diameter case, while the ladies’ model differs only through its smaller size (36.25mm) and by the fact that a single diamond replaces the hour marker in the 7 o’clock position in tribute to the most famous of the “00” secret agents. 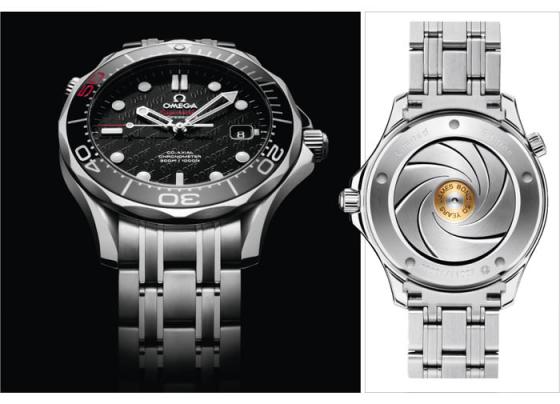 Omega’s chronometer-certified calibre 2507 with the company’s proprietary co-axial escapement powers both models. As its name suggests, the Seamaster Professional is a true diver’s watch. In addition to water resistance to a depth of 300 metres, the watch also comes equipped with a unidirectional rotating bezel and a helium escape valve that can be used during decompression by professional divers.

Purists, however, may not have expected to see a small sapphire crystal aperture in the middle of the screw-on case back. Bond fans, on the other hand, will be delighted at the bullet decoration on the rotor that is visible through it—and framed by the unmistakable graphic used at the opening of every Bond film, which is engraved on to the case back.

With Omega’s annual production creeping towards the one-million mark, limited editions take on a different dimension. Production of the 41mm model is limited to 11,007 pieces, while that of the 36.25mm model will not exceed 3,007. These numbers mean that the watches are far from exclusive, but die-hard Bond fans can take solace from the fact that they offer sixteen different possibilities of having the coveted 007 at the end of their limited-edition number.