Vulcain has a long heritage of fine watchmaking, best known for the Cricket movement. Featuring a long and very audible mechanical alarm, the Cricket has graced many different watches during Vulcain’s history. This year at BaselWorld, Vulcain revisits two famous Cricket models.

Cricket Nautical HeritageVulcain was one of the first diving watch pioneers when the company introduced the Cricket Nautical in 1961. Already famous for its Cricket, the Le Locle-based watch manufacture succeeded in making a watertight watch (down to 300 metres) that divers could hear underwater. To allow for the gaskets and to provide for a special triple case back (for the resonance of the alarm), Vulcain increased the size of the watch to 42mm, a size unheard of at the time as the average case size then was 30mm.Vulcain was ahead of its time back in 1961, so this year the brand has decided to reissue the Cricket Nautical in a limited edition with exactly the same design as when it was first introduced. The Cricket Nautical was in the brand’s line when it was relaunched in 2002, with some updates and slight design changes, but this year Vulcain has gone back to the past for a watch that is both vintage and modern, with all the elements that made it ground-breaking back in 1961. “I am a diver and I have tested it myself and it is spectacular,” says Bernard Fleury, president of Vulcain. “The idea of having an alarm underwater and a system to allow the user to use it with the decompression tables was really innovative and Vulcain took up this challenge and succeeded.”The new Nautical Heritage Limited Edition is limited to 1,961 pieces for the world. 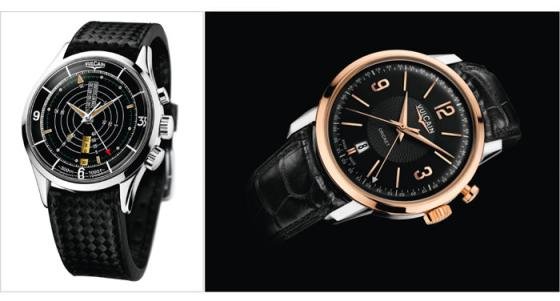 Cricket PresidentsStaying in the vintage realm, Vulcain this year also introduces the Heritage Presidents’ Watch limited series, an identical re-edition of the 1950 model (except enlarged one millimetre from the original). The Cricket was given to a series of American presidents, all of whom wore the watch, so the model became known as the Presidents’ watch. This 39mm watch comes in steel or rose gold and steel, limited to 500 pieces in each execution.Another Presidents’ model, the Vulcain 50s Presidents’ Watch, is also being introduced at BaselWorld. Based on a design from the 1950s, this timepiece comes in a two-tone 18-carat rose gold/steel version (with silver-toned or anthracite dial) or in steel (with a choice of silvered, anthracite and smoky grey dials).At the heart of both of these Presidents’ models is the famous Cricket hand-wind alarm movement with two barrels – one for the timekeeping and the other to power the alarm which sounds for a full 20 seconds (the V-11 Cricket powers the 50s Presidents’ Watch, while the V-10 is the movement in the Heritage Presidents’ Watch).