Victorinox Swiss Army is best known for its Swiss Army knife variations, but watches are a growing part the company’s turnover.“If we look at 2011, the business was quite good,” says Alexander Bennouna, CEO, Victorinox Swiss Army Timepieces. “The first half was excellent, the second half also had a good result. We almost quoted double-digit growth, which given the circumstances, was very good.

“Globally, the group has scored quite a good result, especially in the knife and travel gear division,” Bennouna continues. “As we look at the future, one of the main strategies is to act more and more as a global brand. Victorinox Swiss Army is not a watch brand but a Swiss brand making watches. Whatever we do, whether it is timepieces or luggage or apparel, we have to articulate the value and success of the Swiss Army Knife. This is the direction we have taken, since a couple of years ago, and I think it will be enforced substantially.”Victorinox Swiss Army has repositioned its collection by giving it more Swiss substance, Swiss functionality, and that has contributed to a higher average price. “Our objective is to stay where we are now as much as possible,” Bennouna adds. “We do have to reflect the cost of living, but there is no reason to increase our prices. It is very important for us that a consumer who goes into a Victorinox Swiss Army store can afford all our products, not just fragrances.” 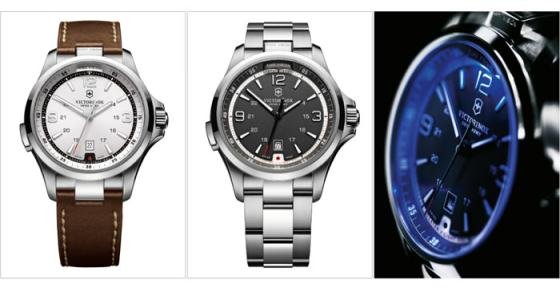 New for BaselThere are two main Victorinox timepiece releases for BaselWorld—the Night Vision and the Officer.The Night Vision is a relaunch of a model that was introduced in 2003. A best seller for the brand, the new 42mm Night Vision has been subtly redesigned with a more open dial and subtler bezel, while still keeping the low consumption LED light modules for dial illumination, flashlight and strobe functions.Three dial versions are available: charcoal grey dial with silver ring and steel bracelet; silver dial with dark grey ring and steel bracelet; and silver dial with dark grey ring and brown “aviator” leather strap with beige stitching and buckle.“The original Night Vision was developed in 2003 with a very specific module, which contained the low consumption LED lights that could transform the watch into a flashlight,” says François Nunez, product director, Victorinox Swiss Army. “The current product we will show in Basel is the third generation of the line. The built-in light is an innovation linked to the Swiss Army Knife, but it also showcases our multifunctionality. We wanted to make this more like a watch, the previous versions were more like flashlights. This watch has a very Swiss approach – clean, straight to the point and subtle.”Nunez goes on to talk about the new Officer watch, which for the first time is being paired with a Swiss Army knife. “We wanted to develop a knife that would have a connection with the watch and we were reluctant to link it like using the knife to set the time or adjust the bracelet,” he continues. “It took 20 years before we decided to do it, and the way we decided to do it was to have the watch inspired by the Officer Knife, so we are using the pattern on the knife on the dial of the watch. We rarely do blacks or whites in Victorinox Swiss Army, so we developed exclusive colours and the knives that come with the watch are not sold individually – three shades of grey, and two different shades of grey for the knives (charcoal grey and medium grey). After 20 years, we were mature enough to make the connection. The shape of the knife is the same as the vintage knife which was issued to Officers in the Swiss Army (in 1961). 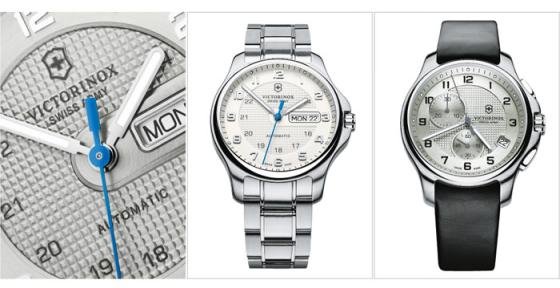 “When I joined VSA, I was obsessed with the knife, which is the iconic product,” Nunez adds. “I don’t believe that our customers expect a direct translation of the knife to our timepieces, but they do want the idea of functionality, durability and reliability. It is extremely hard to build in multifunctionality without being gimmicky. To be relevant today is a tricky thing, and I think we have succeeded with both of these introductions.”