This year, Hanhart is celebrating 130 years of quality watchmaking, something that not many companies can claim.It all started back on 1 July 1882, when an announcement from watchmaker Johann A. Hanhart appeared in the Anzeiger am Rhein newspaper “respectfully informing the worthy residents of Diessenhofen and surroundings” that he had purchased a business and its premises there with the intention of opening a watch shop.With this business, he laid the foundations for the Hanhart watch manufacture. Johann Hanhart, who was born in Diessenhofen, went on to serve as mayor of this small town located on the Rhine for a number of years before relocating his business in 1902 to Schwenningen in southern Germany, a stronghold of watchmaking. The artisanal and retail business proved to be extremely successful and soon became the largest of its kind in the region. 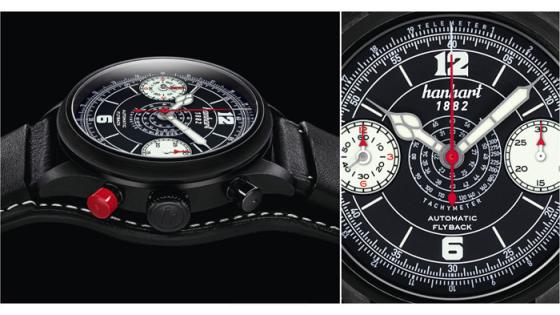 Celebrating the past“When you celebrate an anniversary, you can’t just create something that has no link to the past—we wanted to build a bridge between the past and the present, and the result is the Pioneer Stealth 1882,” explains Thomas Morf, president, Hanhart. “We took the legendary pilot’s watches from Hanhart, which is where it all began, and put a modern, state-of-the-art touch on them, with black DLC coating, while maintaining the vintage groove. We are using the larger size (45mm), we have the removable aviator band, and we have the aviation elements. The Pioneer Stealth 1882 might fly under the radar with its all-black treatment, but the SuperLuminova used makes it highly visible in the dark. “The dial offers practical tachy-meter and telemeter scales, with designs reminiscent of the traditional Hanhart ‘Tachy Tele’ model from 1939,” Morf details. “We use the Twindicator movement and we have added a flyback complication, which came from aviation watches. We wanted to make an aviation watch that linked the past to the future.”One particular feature of the Hanhart Twindicator layout is that the subdials have been enlarged and moved farther out from their traditional position on most chronographs, making them more prominent and easier to read (the subdials are 8.8mm from the central axis, and they are 12mm in diameter).“The Twindicator layout is truly something unique because no one else has it that way,” Morf points out. “For us, it’s really doing something different to do something special.”The Pioneer Stealth 1882 model is a limited edition, 130 pieces with flat bezel and 130 pieces with a fluted bezel. The module for the flyback chronograph is made in-house, in Hanhart’s German manufacturing facility (the headquarters for Hanhart are in Switzerland, while production of modules and stopwatches, and the assembly of Pioneer watches, is in Germany, just over the Swiss border).

Looking into the futureMorf is cautious about the industry as a whole, but is bullish on the future for Hanhart. “I think for the entire industry, it’s going to be slightly more difficult, because everyone made huge growth in China and Asia and replicating that growth will be a challenge,” he says. “I think it will still be ok, but it won’t be as enthusiastic as 2011. With Hanhart, we have so much room to grow. There is so much pressure from the big groups that retailers are looking for independent brands with potential. We are looking for retailers all around the world, when they are appropriate and they can support the brand and commit to it, seeing the potential.”