Romain Gauthier’s new creation, the Logical One, is very impressive. The young master watchmaker (he was born in 1975) has been somewhat discreet since 2010, when he launched the Prestige HMS, fitted with his own manufacture movement, but it was so that he could come back even stronger with an astonishing new model.

Because the Logical One not only reinvents constant force in its own way but also offers a totally innovative system of winding commanded by a pusher.

Chain and snailAs we have known for many years, the power supplied by the barrel varies considerably and rapidly once the mainspring reaches the end of its tension. To combat this, as early as the 15th century a system using a conical pulley, in the form of a fusée, wound by a cord (for large tower clocks) then later by a chain fixed to the barrel, was conceived in order to compensate the gradual loss of torque. But, as Romain Gauthier demonstrates, the fusée and chain mechanism has two main disadvantages: at wristwatch scale, the size of the levels on the fusée require very small—and therefore fragile—links on the chain; and the angle of the chain between the fusée and the barrel adds further tension.

Romain Gauthier has therefore replaced the fusée by a snail that rotates slowly, positioned at the same level as the barrel. The force is therefore transmitted in a straight line and, with the chain being shorter, its links can be bigger and thus more robust.

As a result, Romain Gauthier has conceived a chain whose links are in synthetic ruby, which offers great resistance to wear and a low friction coefficient. These links are attached by a new pressure clip system that is simple, reliable and precise. 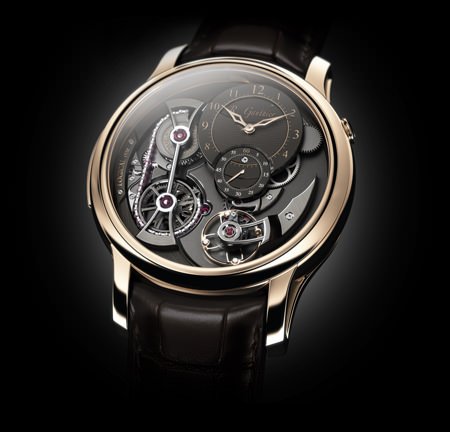 LOGICAL ONE by Romain Gauthier

Ergonomic pusherThe winding system presents another innovation. Dispensing with the traditional crown, which transmits the winding energy to the barrel at 90 degrees through a thin stem, Romain Gauthier has instead opted for a system of winding by means of a pusher that is integrated into the left-hand side of the case. This easy-to-use system allows the force to be transmitted to the barrel in the same plane. He has also placed the mainspring between two synthetic sapphire bridges. This material has a low friction coefficient with steel and is therefore especially resistant to scratches, which eliminates the recurrent problems associated with traditional barrels in brass, where the spring progressively scratches the metal, which ultimately prevents the spring from winding and unwinding correctly. This movement in titanium and brass also has circular arms on the wheels of the going train for maximum rigidity and a high-efficiency profile on the teeth of the wheels (patent pending), as well as very rigid triangular pallets, invented by Romain Gauthier.

A magnificent pieceThis movement, “designed, developed, produced, decorated, assembled and adjusted entirely in-house”, has a superlative finish. Like a spiritual and artisanal son of Philippe Dufour, Romain Gauthier has managed to polish and bevel by hand the acute inner angles of the plates and bridges, creating double chamfered edges which, thanks to two parallel bevels that run along the length of their profile, give a special depth to the mechanical elements framed in this way.

The Logical One has one of the most beautiful faces in artisanal fine watchmaking. Hours, minutes, small seconds and power reserve (60 hours) are displayed on two small dials, offset at the top of the watch, leaving the balance to beat freely and a large area for the fusée-chain spectacle. A great success!