Just like the tortoise in the fable, Antoine Martin’s Slow Runner has arrived “just in time” for BaselWorld, but well before a number of hares that have exhausted themselves on the way there. Because, like the tortoise, the AM36.001 movement in the Slow Runner takes its time to achieve its objective: to decelerate time, counter to the race for speed that is making our civilisation giddy, and take the time to beat out its rhythm.

In horological terms, this philosophy translates to the astonishing figure of 7,200 vibrations per hour, or a frequency of 1 Hz!

Never before seen in the world of ultra high frequencies, where the Holy Grail is that of instantaneity, whereas that of the Slow Runner is more like eternity. Like a marathon runner, whose heart beats like at rest, the seconds hand of the Slow Runner moves twice per second. Its progress is therefore precise in the extreme, throughout its 96-hour power reserve. Its balance is imposing, developing an impressive kinetic energy with its diameter of 24mm. 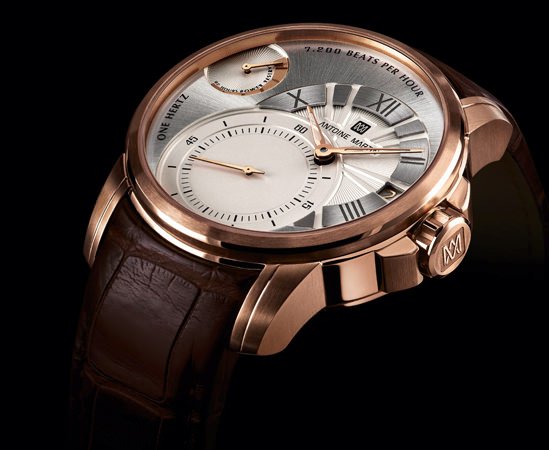 “A quantum leap towards slowness”Chief watchmaker and partner at Antoine Martin, Martin Braun has been convinced of this for some time: small balances and high frequencies are not the be all and end all of watchmaking. By this yardstick, quartz already won hands down. Couldn’t we imagine a “quantum leap towards slowness,” he wondered. But in order to lower frequencies you need to address the problems of friction and materials, you need to combine tribology and mathematics.

Convinced that the special properties of silicon, in particular its low friction coefficient, open up new prospects in mechanics, Braun has combined both escapement and hairspring in silicon. By removing the index assembly and adding two adjustment screws to the balance wheel, by optimising the inner attachment point and the curve of the spring, by cutting the rim of the balance wheel in grade 3 titanium and by using six ruby cabochons as shock absorbers, Martin Braun and his team have managed to achieve optimal stability of rate, over time, with the efficiency of such a large balance.

We will come back to this welcome ode to slowness in more detail. In the meantime, you can see the watch in Basel, in a stainless-steel (CHF 19,500) or red-gold (CHF 34,500) case with a very structured and contemporary design. The silvered dial, on the other hand, is “destructured”, offering the greatest of room for the beautiful spectacle of the small seconds, which is as resplendent as its hand is slow.