We know that Christophe Claret is one of the most sensitive watchmakers to sound and we have lost count of his acoustic accomplishments, from innovative repeaters to cathedral gongs. Starting from a simple observation, but one which has never really been taken into account in watchmaking, that sound is an integral part of timekeeping—athletes start on the sound of a pistol, boxers stop at the sound of the bell—Christophe Claret developed a mono-pusher chronograph that sounds when it is activated.

But Kantharos, as the piece is called, does not just use any old gong: it is a cathedral gong that resonates when the chronograph hand starts moving, when it stops and when it is reset.

Knowing our watchmaker, it’s hardly surprising that he did not stop at this innovation and went even further to add some more complications. So the Kantharos displays the elapsed time using double discs rather than subdials with hands. One of these, in sapphire, shows the digits and the other, in black and white, located underneath, has a red indicator. 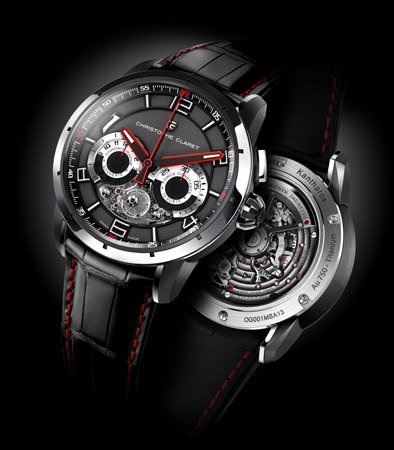 Another significant innovation is that the Kantharos is not just an “integrated-self-winding-mono-pusher-column-wheel-chronograph-with-cathedral-gong” but that its movement, the Calibre MBA13, also has a special constant force mechanism.

We will come back to the details of this mechanism in a future issue of Europa Star—constant force being an area of research that more and more watchmakers are exploring. Let us just say that here the constant force is obtained by an ingenious system of a command cam that is offset from the axle of the constant force wheel, which arms the spring more regularly and more frequently. In continuous movement, this constant force mechanism can be seen under a sapphire bridge at 6 o’clock.

The 588 components of this calibre are housed in an imposing 45mm case in titanium, titanium and white gold or titanium and rose gold with a remarkable thickness, given the complexity of the piece, of 15.83 mm. A cathedral price: CHF 96,000, excluding tax.