WHERE DO YOU COME FROM? Earth and its four dimensions

The most philosophical, and undoubtedly the most striking, watch of the year is the Deep Space by Vianney Halter. Revealed to a happy few, including Europa Star, on the fringe of BaselWorld, it signals with brio the return of Vianney Halter to the centre stage of watchmaking. 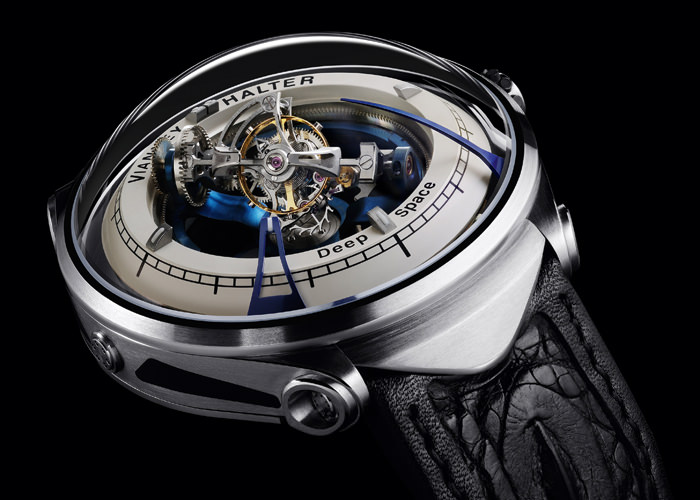 Dreaming that he was lost in a galaxy far away and called to explain to aliens (living in x dimensions) where he came from and what the characteristics of his home planet, Earth, were, Vianney Halter – who does not speak every language of every galaxy – imagined an object that could summarise human experience, whose fundamental principles are the three spatial dimensions in which we move – height, length and depth – and the temporal dimension in which we evolve.

The result is the Deep Space in the form of a dome whose centre is filled entirely with a tourbillon rotating around three axes (the tourbillon carriage rotates around a first axis in 40 seconds; it is housed inside an ultra-lightweight structure that rotates around another axis, perpendicular to that of the carriage, in six minutes; all of this is suspended in a cradle that rotates around the mainplate of the movement in 30 minutes), while the fourth, temporal dimension is indicated by two lateral hands that display the time on a circular track. A summary of our earthly condition.