Carl F. Bucherer: Under the sign of the Manta Ray


The Swiss watch manufacturer is launching a limited-edition timepiece dedicated to the Manta Trust. This British charity is committed to protecting and ensuring the survival of manta rays, which are being threatened by verfishing. Part of the proceeds from sales of the 188 ScubaTec watches will go to help finance an entirely new kind of research expedition.

Carl F. Bucherer: Under the sign of the Manta Ray 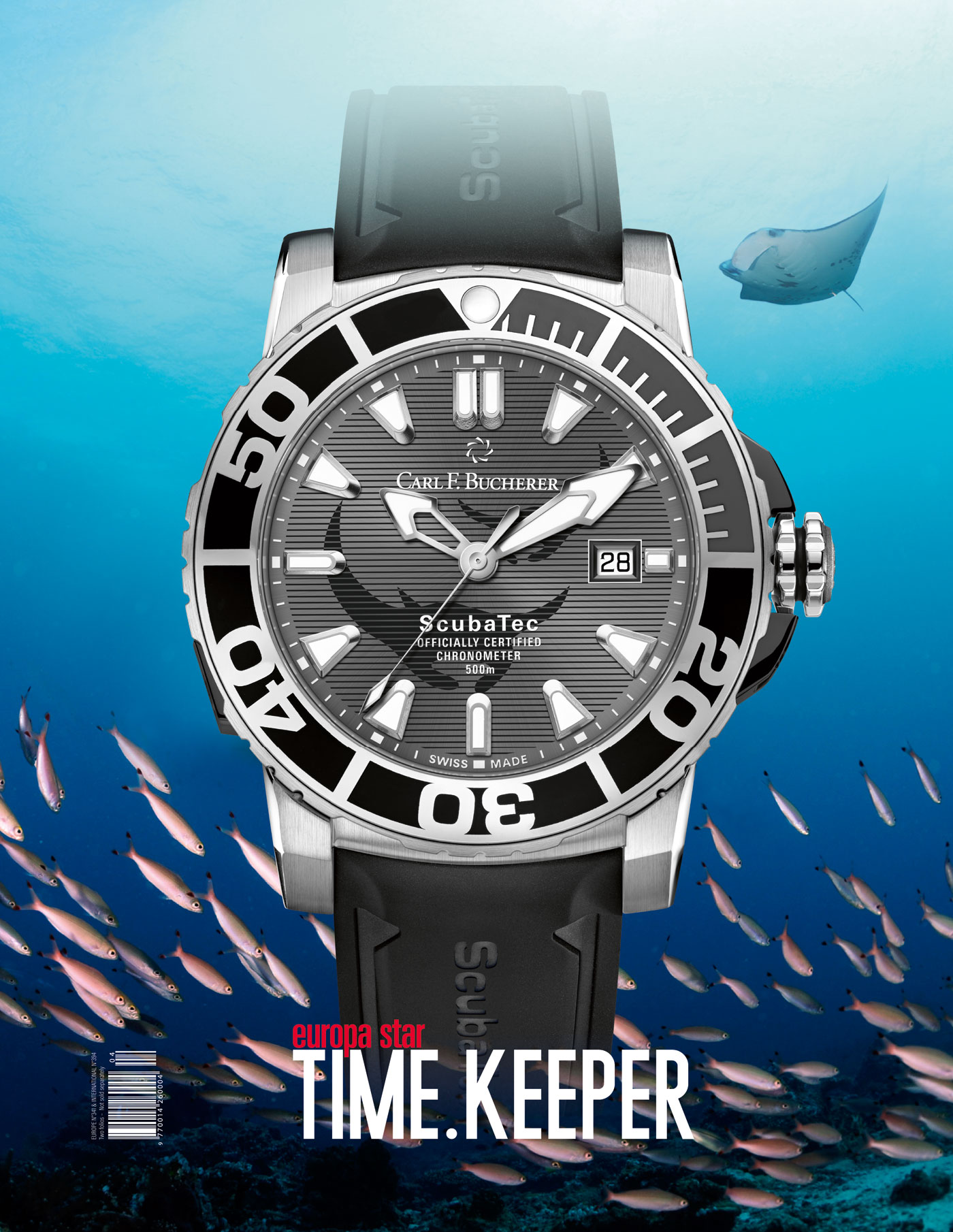 The Swiss watch manufacturer is launching a limited-edition timepiece dedicated to the Manta Trust. This British charity is committed to protecting and ensuring the survival of manta rays, which are being threatened by verfishing. Part of the proceeds from sales of the 188 ScubaTec watches will go to help finance an entirely new kind of research expedition.

Carl F. Bucherer has supported the Manta Trust for many years in order to help with the conservation of manta rays. This partnership now embraces a new dimension with the launch of a dive watch series limited to 188 watches and dedicated to the Manta Trust charity. Two manta rays are pictured on the ridged dial, appearing as though they are surfacing from beneath the ocean waves. 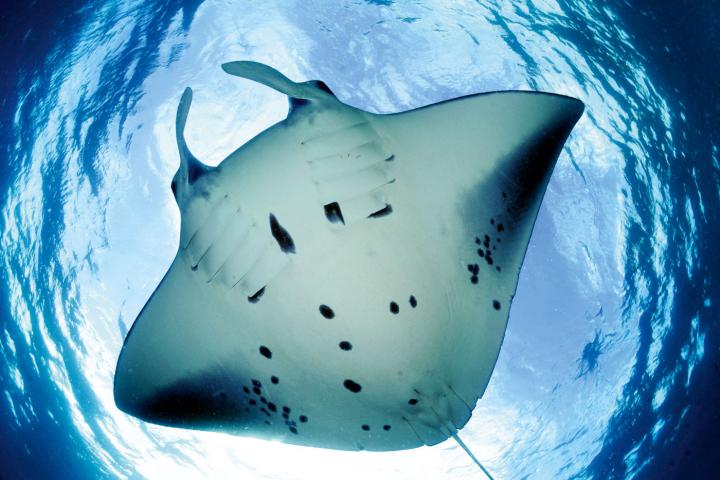 Each watch is one of a kind – a unique engraving on the back of the case depicts the pattern on the underside of a specific individual manta ray captured on underwater camera by Manta Trust CEO Guy Stevens and his team. The identification number is engraved underneath it. This number acts as an access code to a website where the new owner can bestow a name upon this real manta ray. 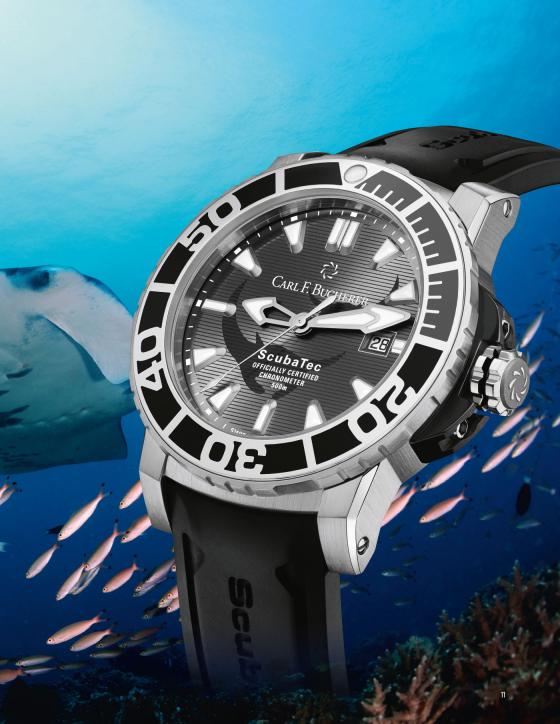 The new Patravi ScubaTec Manta Trust features an automatic helium release valve, making it perfectly equipped for dives of up to 500 metres. The luminescent indices and hands round off its distinctly sporty look and ensure that it is easily readable underwater. With part of the proceeds from the sale of this watch, Carl F. Bucherer will finance an entirely new kind of scientific expedition, during which data will be gathered that will help to protect the habitat of the manta rays. In August 2017, a team will spend two weeks out at sea monitoring the manta ray population in the waters surrounding the Maldives to analyse their habitat use and feeding habits, as well as the planktonic prey on which the mantas feed.The information gathered will be essential for ensuring the survival of the species.

“EVERY WATCH IS UNIQUE AND FEATURES A DIFFERENT MANTA RAY PATTERN”

The Patravi ScubaTec Manta Trust, in the silvery grey tones of the creatures the company is helping to protect, will appeal to lovers of both fine watches and sea life. Carl F. Bucherer’s CEO Sascha Moeri lets us into some of the secrets of this limited edition. 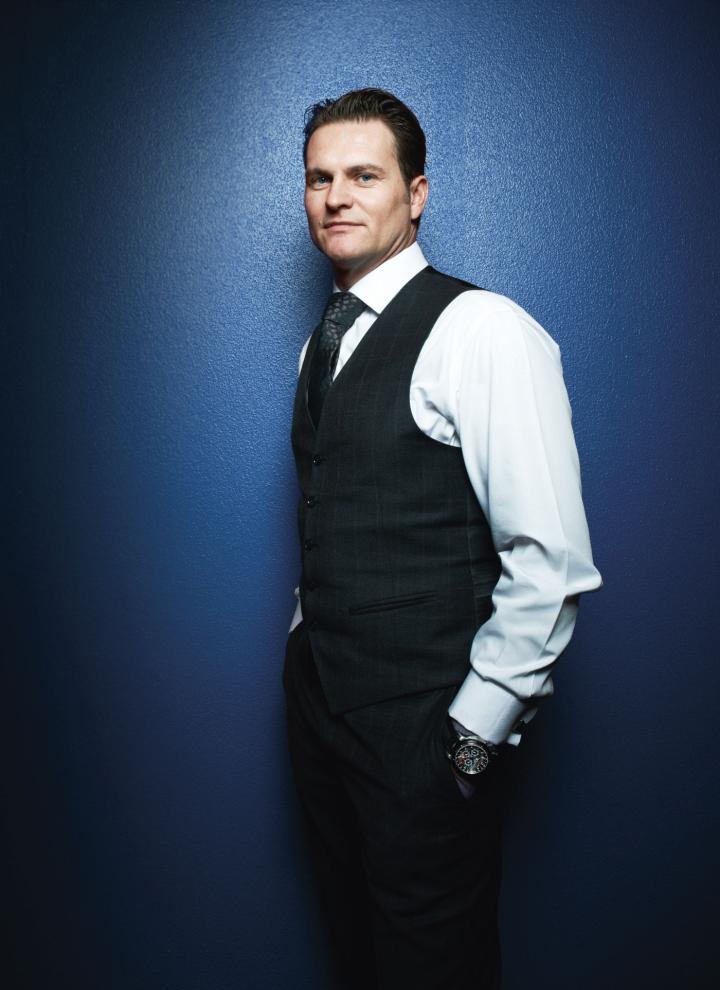 What are the main features of the Patravi ScubaTec Manta Trust?

Every watch is a unique timepiece! Each of the 188 watches features a different manta ray pattern that identifies an individual creature, a bit like a fingerprint. In addition, the owner of the watch can name “his” manta on a dedicated website. In addition to these unique features, we also wanted to contribute to a worthy cause by supporting the Manta Trust and their incredible work in more than 20 countries. As such we decided that a defined amount of the proceeds from every watch we sell will be invested in a two-week observation expedition as well as in a database which helps to classify the observations and findings. Scientists have been waiting a long time for both the expedition and the database. The manta ray is the symbol of our ScubaTec family. Each model in this flagship collection has two manta rays engraved on the reverse. But it’s only the Manta Trust limited edition that features the markings of a unique manta ray.

So, who are these watches aimed at?

Traditionally, our ScubaTec collection is very strong in Europe, the Middle East and the United States. The limited edition will appeal to connoisseurs looking for an exclusive, high-quality timepiece with COSC chronometer certification, as well as to lovers of marine life. The watch is both elegant and mysterious, and its colours reflect the colours of a manta ray. Mr Bucherer himself, who generally wears a tourbillon or perpetual calendar model, always takes a ScubaTec with him on summer holiday! With all these advantages, as well as a price tag of CHF 5,900, I have no doubt that this limited edition will quickly find an audience when we launch it this summer.

Do you have any follow-up projects planned?

Of course! This limited edition takes our partnership with the Manta Trust to the next level. Given the scope of the ScubaTec collection, there are lots of future development possibilities, and we’re not short of ideas. It’s very important to us that we continue to showcase the activities of the trust. For the record, it was because of this partnership, which we concluded quite a few years back, that we now engrave two manta rays on the back of all our ScubaTecs. In fact, our first joint project with the Manta Trust involved monitoring two manta rays in the Maldives. Naturally, we decided to call them... Carl and Friedrich! 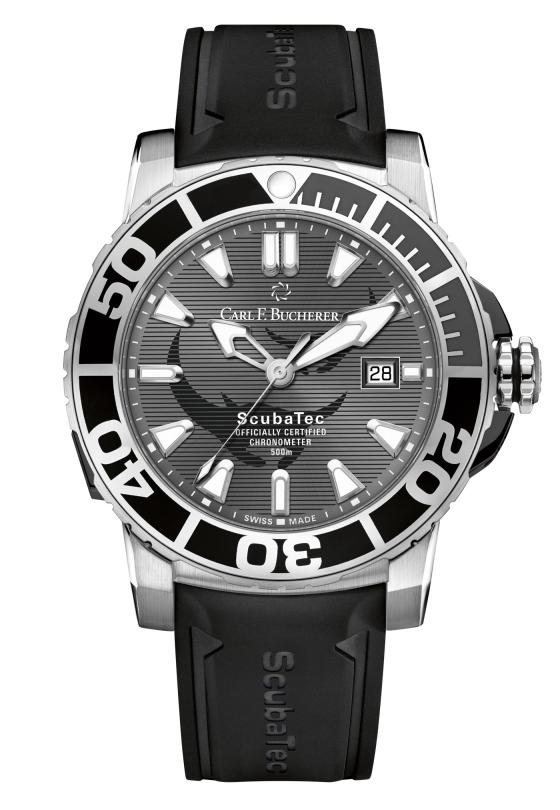 Back of the case 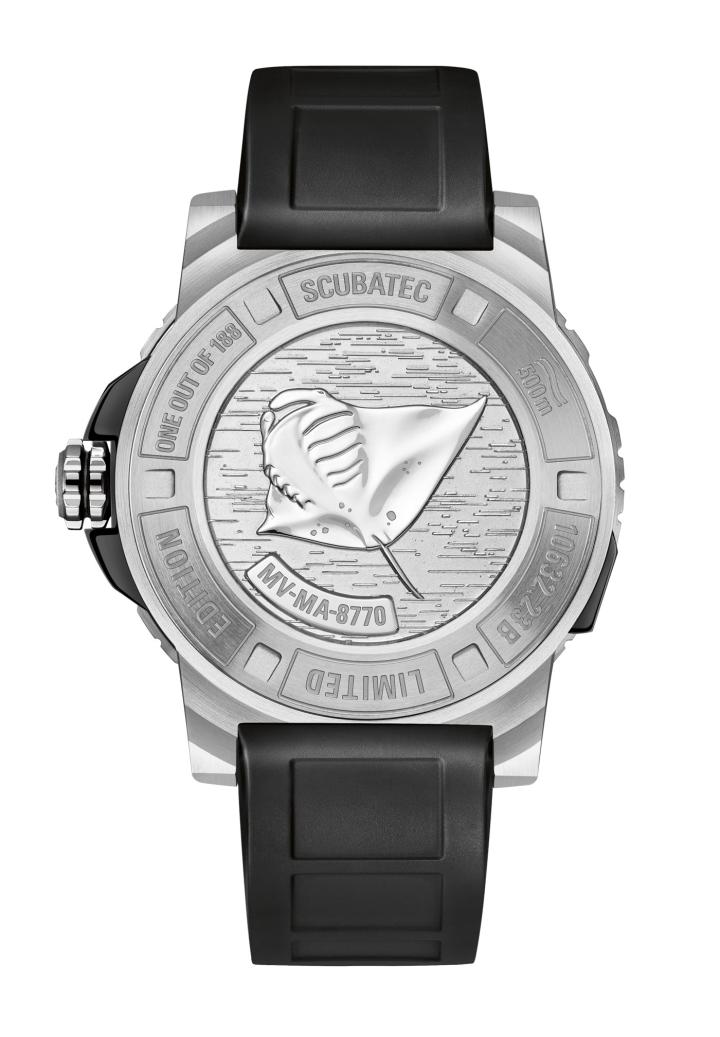 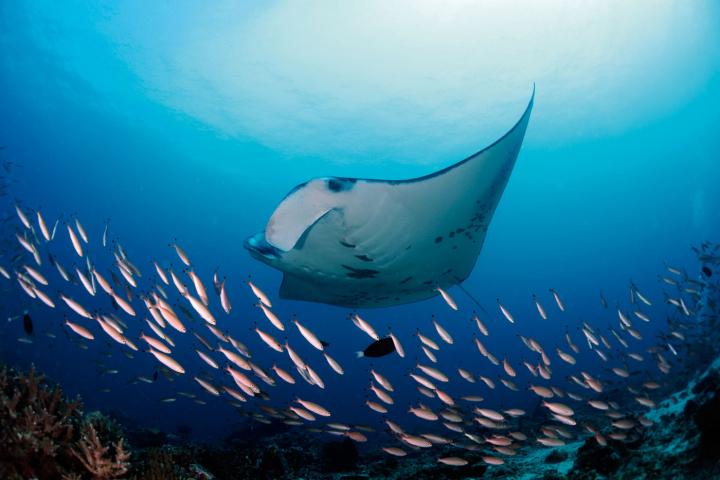 Whether ocean or reef dwellers, manta rays are a potent symbol of marine life, boasting the largest brain of all species of fish. But they are also extremely vulnerable, and are currently under grave threat from the fishing industry. The Manta Trust, which is supported by  Carl F. Bucherer, studies them at close range and leads concrete initiatives to save them from extinction. Guy Stevens of the UK, who founded the trust, answered our questions. 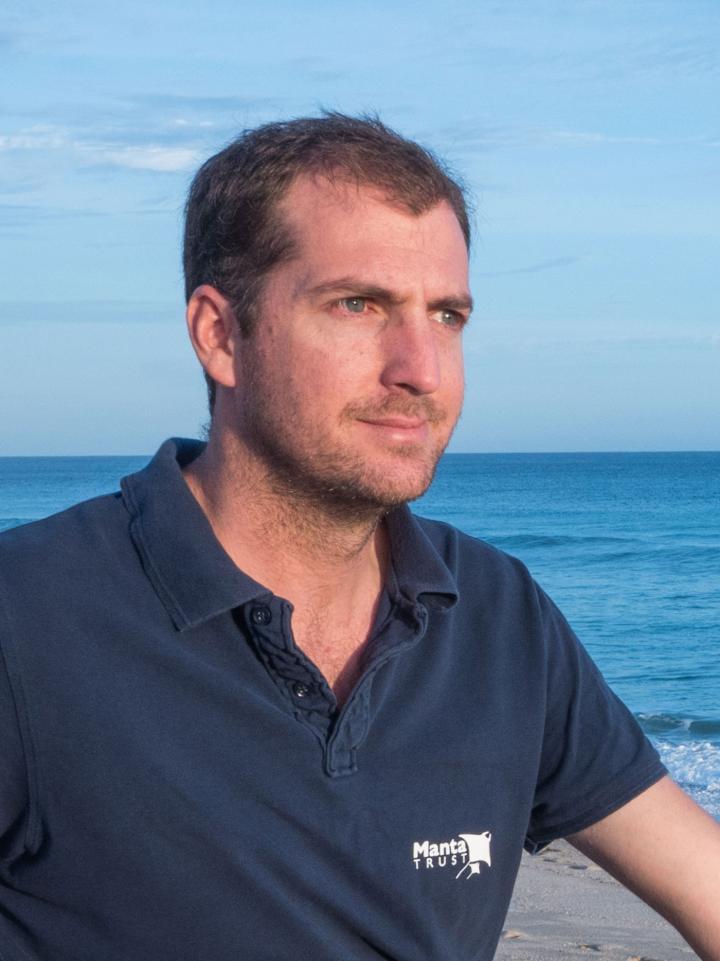 Guy Stevens of the UK, Founder of the Manta Trust

The manta ray is categorised as a “vulnerable” species by the International Union for Conservation of Nature. What are the main threats to its survival?

The biggest threat comes from fishing – both fishing that targets the manta ray directly, and also what is called “bycatch”, where they are caught unintentionally. The manta’s gill plates are prized in medicine, which unfortunately has led to increased fishing for this fragile species. The results are shocking. Populations have declined dramatically in Indonesia, the Philippines and in the Indian Ocean. These fish have a very fragile life cycle, and their population levels are naturally low. They don’t reach sexual maturity until the age of 10 or 15 years, and then they reproduce slowly and bear just one pup at a time. This makes the impact of fishing all the more devastating.

What concrete actions does the Manta Trust undertake to preserve the manta ray?

We were heavily involved at a global level in having the manta added to the CITES, the Convention of International Trade in Endangered Species. We helped the countries concerned and provided scientific data. We are very proud that our perseverance paid off! We also campaigned to have manta rays listed in the Convention on Migratory Species (CMS). It is difficult for countries to take unilateral measures when the rays migrate to different habitats.

Are you also active at national level?

Yes, in Peru and Indonesia, for example. We’re also very active in the Maldives. Thankfully, manta ray fishing is banned there, as are the fishing nets that can trap them accidentally. That is why the islands are home to such an enormous concentration of reef mantas, with an estimated population of around 5,000. We have also helped to identify their key aggregation sites in the Maldives.

Manta rays have the biggest brain of any fish. Are there any other scientific mysteries to solve, where the manta ray is concerned?

Yes, a huge number! To give you an idea, it is only in the last ten years that we have begun to answer some key questions about their lifespan, how they reproduce, their habitat, what they eat, etc. And that’s just the tip of the iceberg. I’m a scientist myself, and I have many colleagues who are also trying to answer these questions. For example, the only way we can establish their lifespan is through photographic identification, which is why it is so important to record each individual accurately. The size of their brain is also a fascinating topic, and hints at the complexity of their social interactions. 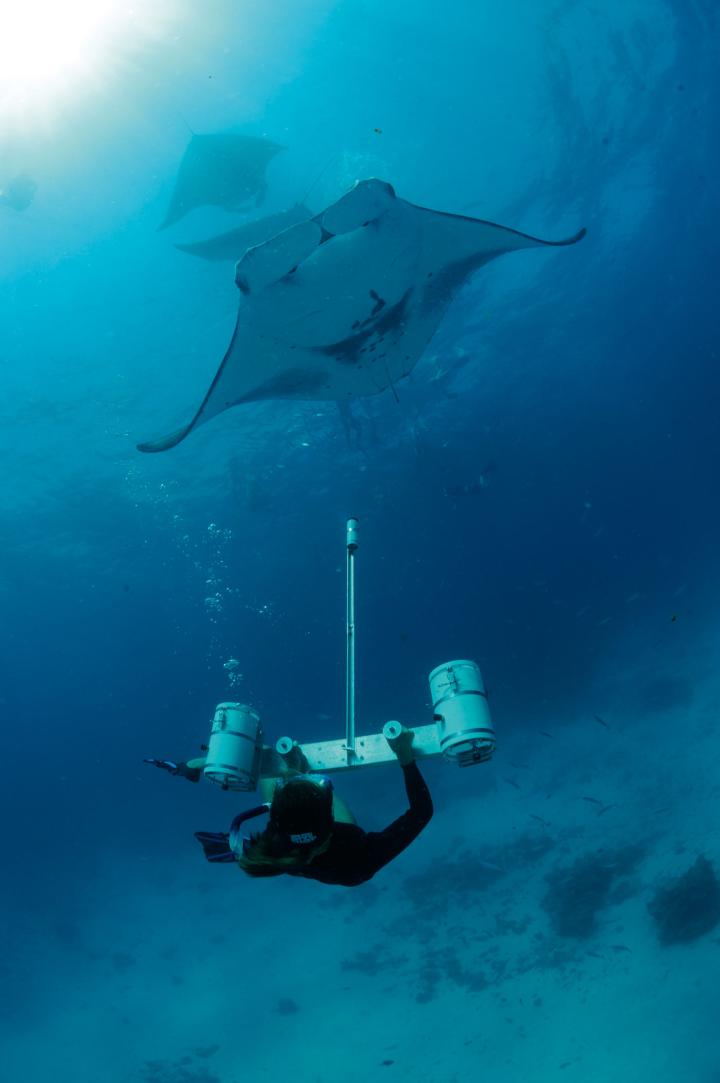 You go diving regularly to photograph and document the manta rays. What are the rules for approaching them in the water?

In general, it tends to be the rays who approach the divers, they are very curious creatures! The best tactic is to remain as calm as possible and swim slowly, slightly off to the side and never straight at them, so as to leave their way ahead clear. Let them get a good look at you, don’t surprise them.

How did your partnership with Carl F. Bucherer come about?

A little over three years ago we were contacted by the company, who were in the process of creating a diving watch. Their designer was fascinated by manta rays, and wanted to engrave one on the watch. He approached us to find out more about the species, and the company decided to support us. With their support, we were able in the first instance to begin tagging rays in Mexico. Thanks to Carl F. Bucherer, we have also created a code of conduct to promote best practice in interactions with manta rays, which we have distributed to the tourist industry.

The partnership is moving to the next level today with the launch of a Manta Trust limited edition comprising 188 watches, each featuring a different manta ray. Were you involved in designing these watches?

During our discussions we all agreed on engraving pictures of the manta rays we identified during our dives on a limited number of watches. I felt it was a unique and amazing idea, because it allows us to monitor each of the 188 creatures chosen. The owner of the watch can give “their” manta ray a name of their choice. We always name the manta rays we identify: it’s more friendly, and it’s also easier to remember a name than an ID number! The watch also creates a logistical challenge, because we’re creating a special database that will be accessible to the watch owners. They can get basic information about the manta ray they are sponsoring, like age, size, the state of their health etc. So you not only buy a great timepiece but you also help to protect Mantas by purchasing that watch.

Another important aspect of this operation in partnership with Carl F. Bucherer is an expedition to the Maldives next August. What is its purpose?

We’re bringing together a small group of scientists from different domains to try to better understand how manta rays feed. This will enable us to identify the species’ key habitats, where they find their food, and consequently the places that must be protected as a priority. To achieve this, we will be diving to collect plankton – their sole food source – and tissue samples from the manta rays. By comparing them we hope to establish a precise link between the two.

As a diver, you no doubt have a very special relationship with watches...

A diving watch is an essential part of our equipment, but my view of them has changed. When I started diving, I was happy to wear a big, complicated block of plastic over my wetsuit, but today I have a proper elegant watch on my wrist, which I also wear on land. That would have been unthinkable with the watch I was wearing 15 years ago!