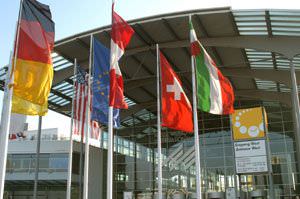 The strong showing from inhorgenta europe, the 31st International Trade Fair for Watches, Clocks, Jewellery, Precious Stones, Pearls and Technology, has not only further boosted the fair´s status as the EU´s leading trade fair for watches and jewellery, but has also given the international sector cause to take an optimistic view of current business and market trends.

Jochen Exner, Managing Director, Gebr. Niessing GmbH & Co.: “inhorgenta europe 2004 went extremely well indeed for us. I can report that we had really good visitor frequency at our stand. Particularly pleasing is the distinct increase in the proportion of international trade visitors. This year in Munich we were able to serve many customers from the Netherlands, Spain and even from the US.”

Despite the slight downturn in visitor numbers, order activity at inhorgenta europe was up. Manfred Wutzlhofer, Chairman & CEO of Messe München GmbH: “The increasing demand on the part of the retail trade is showing that after the years of weak economic activity, which weighed particularly on the consumer goods area, there is a now a growing optimism in the sector.”
This is reflected, too in the survey by independent market researchers TNS Infratest. 84% (2002*: 82%) of visitors described their level of achievement of the goal of reaching firm purchase agreements as 'excellent to good'. On the exhibitor side, too, this assessment was confirmed.

Thomas Körner, Managing Director, Festina Uhren GmbH: “We are highly satisfied with the way the fair went. With an increase in sales of 115 percent on the first two days, our expectations of inhorgenta europe 2004 were more than fulfilled. From Eastern Europe, in particular, there were noticeably more customers. For us it´s clear that we will be further expanding our presence at inhorgenta europe in 2005.”

The new Brand Avenue in Hall A1 for the suppliers of lifestyle and fashion watches was very well received by exhibitors and visitors. Harald Schröder, Marketing Manager, Casio Europe GmbH: “The A1 Brand Avenue at the fair provided an excellent, atmospheric forum for the watch manufacturers. For Casio it was tremendously important to serve the German retail trade in Munich. The response is very good.”

The very diverse and creative accompanying programme at inhorgenta europe again attracted many participants. The inhorgenta Design Podium competition, the Innovations Prize for outstanding and future-oriented jewellery design was awarded for the fifth time. The pieces were part of a special exhibition on Designer´s Avenue in Hall C2. “What was created in Hall C2, is unique around the world. The designer jewellery on show at inhorgenta europe, with its many innovative forums and special displays, are a sensational magnet for visitors,” said Carl Dau, owner and Managing Director of the company of the same name.

The various special exhibitions were big attractions for the international visitors. Popular displays were 'Diamonds – Wonder of Nature', with some of the most beautiful pieces of diamond jewellery in the world, exhibited by the Diamond Trading Company, and 'Pure – Rare – Eternal', an extensive display of select and contemporary platinum jewellery, put on by the Platinum Forum.

Final report in detail and photos available at www.inhorgenta.com