“Inhorgenta Europe is the gateway to Central and Eastern Europe”


“Inhorgenta Europe is the gateway to Central and Eastern Europe” 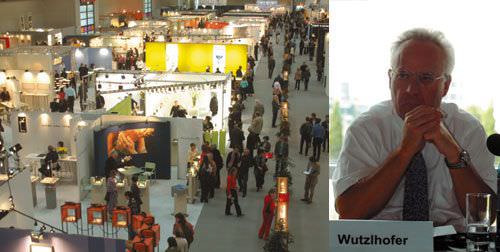 In his opening address, Manfred Wutzlhofer, the Chairman & CEO of Messe München, drew attention to the important role of Inhorgenta Europe in this context. This international trade fair for watches, clocks, jewellery, precious stones, pearls and technology, which takes place from 25 to 28 February 2005, will for the first time be taking place against a background of the enlarged EU, a single market comprising 25 member states and 450 million inhabitants. Each year Inhorgenta Europe attracts 1,200 exhibitors from 40 countries, and up to 30,000 trade visitors from 70 countries. As such it has established itself as the most important trade fair for jewellery, watches, clocks and precious stones in the European Union, both previously and in its new expanded form. A good 30 per cent of the 27,076 visitors to Inhorgenta Europe 2004 came from outside Germany. The proportion of foreign visitors has increased by 46 per cent since the year 2000. Mr Wutzlhofer announced at the event that activities to attract trade visitors from the new EU countries and Russia would be stepped up still further. The very successful 'Top Buyers Programme', for jewellers primarily from Europe, would be extended to the new EU member states, he said. In addit-ion, 'Inhorgenta Europe news', published ahead of the fair, would appear this time also in Polish and Russian.

Free trade in the enlarged EU
The participants in the panel discussion agreed that the enlarged EU would considerably ease economic relations. The removal of tax restrictions and customs duties was highlighted by all speakers. For example, in Hungary, a few years ago, the luxury tax on silver was abolished, and recently also the tax on gold and gold jewellery. This brought enormous advantages for Hungarian importers and manufacturers, and also for the companies that exported to Hungary, emphasised Dr József Takács, Chairman of the Hungarian jewellers’ association MANEOSZ. Sandro Erl, marketing director of Furrer-Jacot, emphasised the strong international significance of the fair: “Around 30 per cent of the visitors come from outside Germany, which is an impressive figure. We see Inhorgenta Europe as the gateway to the new member states. If the fair succeeds in tapping this enormous market potential in the coming years, that would be fantastic.”

For further information and
photos go to www.inhorgenta.com