MeisterSinger – For people with a sense of time


MeisterSinger – For people with a sense of time

Over five years ago, MeisterSinger appeared as a new concept in timepiece design with a clarity, distinctiveness and individualism that took even the cognoscenti of the watch market by surprise. In the 1990s, MeisterSinger designer Manfred Brassler had a major impact on the modern designer watch market. After selling his firm, he worked for three years to develop a watch combining timeless design and sophisticated elegance. One of these extraordinary pieces is the MeisterSinger UNOMATIK.

Paying tribute to the value of time through artistic composure is the principle behind the MeisterSinger UNOMATIK. The consistent development and application of the philosophy behind the single-handed watch exhibited by the MeisterSinger UNOMATIK gives the customer a valuable hand-tooled item meeting high artistic, aesthetic and functional demands. 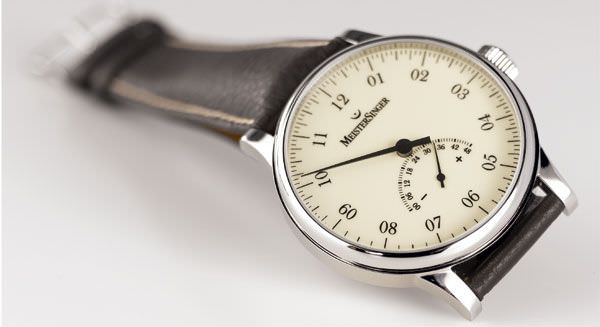 The ideal proportions the pocket watch format from the 17th and 18th centuries offered shaped Manfred Brassler’s decision to use a 45 mm case for MeisterSinger UNOMATIK, creating space for imaginative design. The designer ingeniously placed zeroes in front of the single digit numbers, achieving a balanced and uncluttered dial. Next he creatively integrated a stopwatch-style hand, lending the MeisterSinger timepiece the unadorned aesthetic appeal of a measuring instrument. The extra-long overhanging hand handsomely complements the large dial face. The spatial relationship between dial and hands is thus optimally proportioned.

Manfred Brassler indulged his own stylistic preferences in the case design - a gently moulded, pocket watch-like housing with moveable lugs and a flat, plate-shaped crown. The polished case has six screws. The 46 hours power reserve is shown on a display of the single-handed watch which feature a sapphire glass cover as standard. Elegance and character are enhanced by the subtle reflections on the domed glass. If worn every day the MeisterSinger UNOMATIK no longer needs winding. The wearer’s natural movements give the watch its drive; the human rhythm is transferred harmoniously to the mechanism. MeisterSinger UNOMATIK is not only true to watchmaking and technical traditions – they also bring them to life.

While the individual stylistic elements of all MeisterSinger watches are rather unassuming in and of themselves, in concert they create a harmonious visual profile that is one of a kind. The MeisterSinger brand name is conscious of these design ideals, placing it within the venerable guild tradition of master goldsmiths and artisans as a true continuation of the high medieval art of song and poetry. In their first five years on the market, MeisterSinger watches have received seven award nominations and prizes including the Red Dot Award.