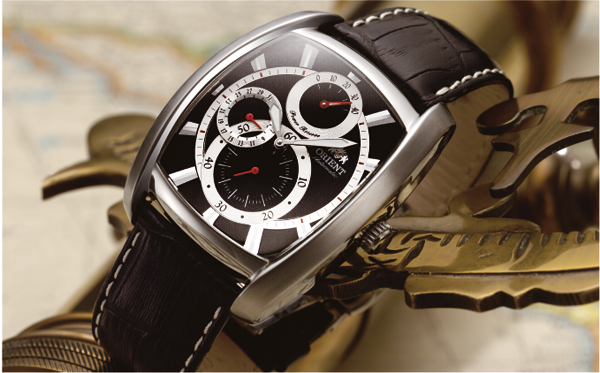 ORIENT WATCH CO., LTD. was established in July 1950 in Tokyo as a manufacturer of wristwatches. Its predecessor dates back to 1901, when Shogoro Yoshida, the founder, opened a wholesale store of watches in Ueno, one of the commercial districts in downtown Tokyo. For more than 50 years since their foundation, they have been passionately promoting ORIENT brand throughout the world with their intensive global marketing efforts.
For the Japanese market, they are concentrating on their prestigious high-quality mechanical watch lines, such as “Royal Orient”, which can guarantee the consumers to wear with satisfaction for many years.
For overseas markets, they have been introducing different lines of watches such as “World Time 2005 Edition” and “Orient Star Retro-Future collection” which represent their current sophisticated technology standards.
Furthermore, their micro-precision technology, cultivated through 50 years' experience in the manufacture of timepieces, has enabled them to expand the scope of their activities to other industry segments such as IT-related products including printer components, quartz oscillators, silicon wafers and other electronic devices. They intend to improve their precision technology further and to strengthen cost competitiveness, so that they will be able to increase sales turnover for high value-added products.
In coping with the relentless market competition, they will continue their efforts to make their business structure more solid in the three core business segments - watches, IT-related products and electronic devices.

Production and Distribution of Watches: Over 2,000,000 pieces per year

The Europe of the 1950s saw a boom in industrial designs focusing on “Dreams of the Future”. Looking back to the “Retro” designs, we remain fascinated and moved by the progressive inspirations that have inspired a generation before.
Automatic watches are suitable for symbolically expressing the “Retro” and the “Future”, because of its long history and newly developed technology.
The “ORIENT -STAR Retro-Future Collection” was developed and successfully merges the two ideas using industrial design motifs from classic 1950s Motorcycles, Cars, Cameras and Airplanes.

The Motorcycle Model
Inspired by the design of the 1950s Italian motorcycle.
The image of a gasoline tank is conveyed by incorporating smoothly curved parts on the dial. The second hand resembles a tachometer, which displays the number of revolutions of the engine, and various indicators that give the impression of a power-reserve indicator that shows driving time. Also, the design of the balance section at the heart of the automatic watch expresses an appealing mechanical image through its movement, inspired by the motif of a motorcycle sprocket. This watch demonstrates the unique and magnificent combination of the 1950s motorcycle and the automatic watch.

The Car Model
Inspired by the image of the 1950s Italian sports car.
ORIENT WATCH CO. LTD. has created this nostalgic and original design by skillfully blending a gentle retro effect and the futuristic sharpness of the bodyline of the cars of that era into a tonneau-style case.
The image of the sports cars that were seen everywhere at that time is created by the power-reserve indicator displaying driving time, and the design of the balance in the central part gives the impression of a steering wheel.

The Airplane Model
Inspired by the image of a 1950s American- made airplane.
The design of the dial and watch hand gives a vivid impression of an instrument panel in the airplane cockpit that everyone adored as children. In addition, the circular case looks like an engine cowl and the features in the middle of the dial give the image of a spinner. This combination gives the watch the overall appearance of an “airplane engine”.
The lagging that joins the case to the wristband is in the shape of the tail fin and the design of the wristband incorporates the design concept of wing flaps. These intricate details give the definite impression of the distinct features of an airplane.
Even with the passing of time, people who are fascinated by the airplanes of the 1950s can enjoy the luxury of wearing a watch that conveys the feel of that era.