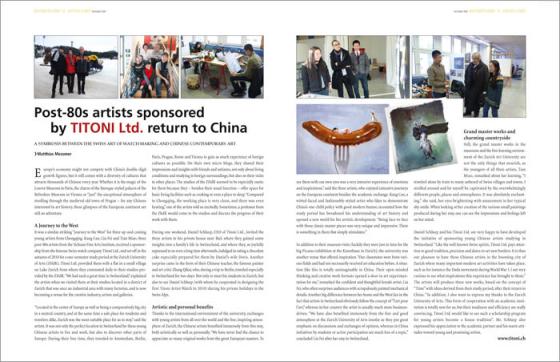 Europe’s economy might not compete with China’s double-digit growth figures, but it still comes with a diversity of cultures that attracts thousands of Chinese every year. Whether it is the magic of the Louvre Museum in Paris, the charm of the Baroque-styled palaces of the Belvedere Museum in Vienna or “just” the exceptional atmosphere of strolling through the medieval old town of Prague – for any Chinese interested in art history, these glimpses of the European continent are still an adventure.

A Journey to the West
It was a similar striking “journey to the West” for three up-and-coming young artists from Chongqing. Kang Can, Liu Fei and Tian Miao, three post-80s artists from the Sichuan Fine Arts Institute, received a sponsorship from the famous Swiss watch company Titoni Ltd., and set off in the autumn of 2010 for a one-semester study period at the Zurich University of Arts (ZHdK). Titoni Ltd. provided them with a flat in a small village on Lake Zurich from where they commuted daily to their studios provided by the ZHdK. “We had such a great time in Switzerland,” explained the artists when we visited them at their studios located in a district of Zurich that was once an industrial area with many factories, and is now becoming a venue for the creative industry, artists and galleries.

“Located in the center of Europe as well as being a comparatively big city in a neutral country, and at the same time a safe place for residents and travelers alike, Zurich was the most suitable place for us to stay,” said the artists. It was not only the perfect location in Switzerland for these young Chinese artists to live and work, but also to discover other parts of Europe: During their free time, they traveled to Amsterdam, Berlin, Paris, Prague, Rome and Vienna to gain as much experience of foreign cultures as possible. On their own micro blogs, they shared their impressions and insights with friends and netizens, not only about living conditions and studying in foreign surroundings, but also on their visits to other places. The studios of the ZHdK seemed to be especially exotic for them because they – besides their usual function – offer space for basic living facilities such as cooking or even a place to sleep. “Compared to Chongqing, the working place is very clean, and there was even heating,” one of the artists told us excitedly. Sometimes, a professor from the ZhdK would come to the studios and discuss the progress of their work with them.

During one weekend, Daniel Schluep, CEO of Titoni Ltd., invited the three artists to his private house near Biel, where they gained some insights into a family’s life in Switzerland, and where they, as joyfully expressed to us even a long time afterwards, indulged in eating a chocolate cake especially prepared for them by Daniel’s wife Doris. Another surprise came in the form of their Chinese teacher, the famous painter and art critic Zhang Qikai, who, during a trip to Berlin, traveled especially to Switzerland for two days: Not only to meet his students in Zurich, but also to see Daniel Schluep (with whom he cooperated in designing the first Titoni Artist Watch in 2010) during his private holidays in the Swiss Alps.

Artistic and personal benefits
Thanks to the international environment of the university, exchanges with young artists from all over the world and the free, inspiring atmosphere of Zurich, the Chinese artists benefited immensely from this stay, both artistically as well as personally. “We have never had the chance to appreciate so many original works from the great European masters. To see them with our own eyes was a very intensive experience of emotions and inspirations,” said the three artists, who enjoyed extensive journeys on the European continent besides the academic exchange. Kang Can, a witted-faced and fashionably-styled artist who likes to demonstrate China’s one-child policy with good modern humor, recounted how the study period has broadened his understanding of art history and opened a new world for his artistic development. “Being face-to-face with those classic master pieces was very unique and impressive. There is something in them that simply stimulates.”

In addition to their museum visits (luckily they were just in time for the big Picasso exhibition at the Kunsthaus in Zurich), the university was another venue that offered inspiration. “Our classmates were from various fields and had not necessarily received art education before. A situation like this is totally unimaginable in China. Their open-minded thinking and creative work formats opened a door in art experimentation for me,” remarked the confident and thoughtful female artist, Liu Fei, who often surprises audiences with scrupulously painted mechanical details. Another big difference between her home and the West lies in the fact that artists in Switzerland obviously follow the concept of “l’art pour l’art,” whereas in her country the artist is usually much more business-driven. “We have also benefited immensely from the free and good atmosphere at the Zurich University of Arts insofar as they put great emphasis on discussions and exchanges of opinion, whereas in China initiatives by students or active participation are much less of a topic,” concluded Liu Fei after her stay in Switzerland.

Grand master works and charming countryside
Still, the grand master works in the museums and the free learning environ-ment of the Zurich Art University are not the only things that nourish, as the youngest of all three artists, Tian Miao, remarked about her learning. “I traveled alone by train to many unheard of Swiss villages and towns. I strolled around and let myself be captivated by the overwhelmingly different people, places and atmospheres. It was absolutely enchanting,” she said, her eyes brightening with amazement in her typical shy smile. When looking at her creation of the various small paintings produced during her stay, one can see the impressions and feelings left on her mind.

Daniel Schluep and his Titoni Ltd. are very happy to have developed the initiative of sponsoring young Chinese artists studying in Switzerland. “Like the well-known Swiss spirits, Titoni Ltd. pays attention to good tradition, precision and dares to set new borders. It is thus our pleasure to have these Chinese artists in the booming city of Zurich where many important modern art activities have taken place, such as for instance the Dada movement during World War I. I am very curious to see what inspirations this experience has brought to them.” The artists will produce three new works, based on the concept of “Time” with ideas derived from their study period, after their return to China. “In addition, I also want to express my thanks to the Zurich University of Arts. This form of cooperation with an academic institution is totally new for us, but their readiness and efficiency are really convincing. Titoni Ltd. would like to see such a scholarship program for young artists become a house tradition”. Mr. Schluep also expressed his appreciation to the academic partner and his warm attitudes toward young and promising artists.