Ingersoll and Disney: So Mickey Mouse

Ingersoll and Disney: So Mickey Mouse

Ingersoll and Disney have joined forces to re-introduce the iconic, and ground-breaking, Mickey Mouse watch. The Mickey Mouse watch introduced in 1933 was the first licensed character watch ever. This year at BaselWorld, Ingersoll, who made that first watch in partnership with the Walt Disney Company, will introduce an updated version of this iconic timepiece plus three other models launched in the same period.

“We are making a tribute to the very first Mickey Mouse watch ever produced in 1933,” says Mike Clitherow, Group Marketing Manager of Zeon Limited, the parent company of the Ingersoll brand. “We made these watches as authentic as possible, and as there were no quartz movements at that time, these watches are powered by high quality, 17-Jewel Seagull hand wound mechanical movements. We have kept the original size and design, with the iconic Mickey Mouse figure with his arms indicating the hours and minutes. We have upgraded the materials and made sure that the bracelets and straps fit an adult wrist.”

These watches are branded Mickey Mouse and Ingersoll, with the updated Disney copyright mark on the back of the watch. Each of the four timepieces in this collection (wristwatch on a strap, wristwatch on a bracelet and two pocket watches) has a running second disc adorned with three Mickey Mouse figures.

According to Clitherow, the customer for Ingersoll’s tribute to the start of this marketing phenomena is the collector, as well as Disney fans and watch enthusiasts. “This is designed for people who want something original and authentic, and each watch will have a unique production number,” he details. We are launching these products in the United States through the Official Disney Enthusiast Club “D23” in August this year. We will be supplying the specialist market worldwide through distributors such as Cristano for Germany, Austria and Switzerland, and GB Partners for Italy plus other countries via new contacts through meetings at BaselWorld. These watches will also be sold in Disney retail outlets throughout the world later in the year.”

Ingersoll has an authentic history represented in these timepieces, as the watch not only celebrates Mickey Mouse, but also the birth of character licensing. “We are very pleased to be able to reproduce something which goes back to the roots of licensed product marketing,” Clitherow explains. “Our brand, Ingersoll, was involved with Disney in the creation of this technique of marketing products. Zeon – Ingersoll’s parent company are still Europe’s leading supplier of licensed character watches for Disney and many others.”

All four items are made from stainless steel and are presented in an authentic 1930’s gift box which includes a booklet with the Ingersoll and Mickey Mouse history. The wristwatches are priced at 179 Euros for the strap version and 199 Euros for the Art Deco bracelet model. The pocket watches are 299 Euros and are produced in a ‘gold or silver retro finish’.

Everyone of a certain age will remember the iconic Mickey Mouse watch, with his moving arms and sunny disposition, and this tribute is sure to bring a smile to everyone, young and old. 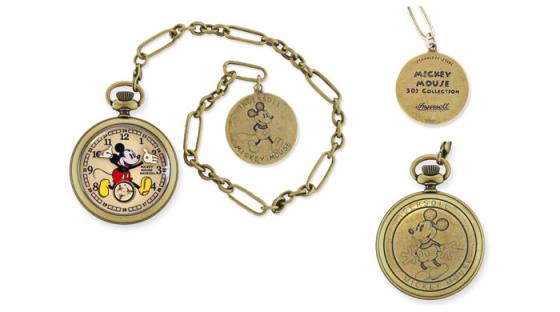 Please visit Ingersoll at BaselWorld to see these timepieces in person, Hall 2, Stand A80.