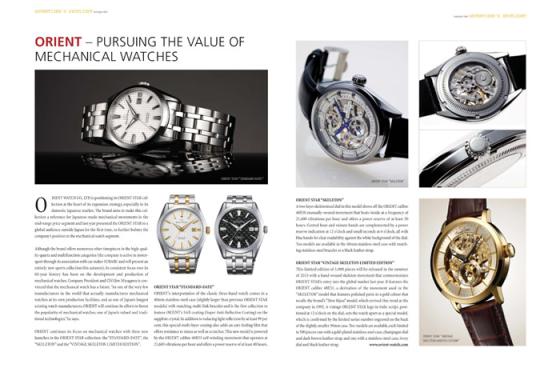 ORIENT WATCH CO., LTD is positioning its ORIENT STAR collection at the heart of its expansion strategy, especially in its domestic Japanese market. The brand aims to make this collection a reference for Japanese-made mechanical movements in the mid-range price segment and last year presented the ORIENT STAR to a global audience outside Japan for the first time, to further bolster the company’s position in the mechanical watch segment.

Although the brand offers numerous other timepieces in the high-quality quartz and multifunction categories (the company is active in motorsport through its association with car maker SUBARU and will present an entirely new sports collection this autumn), its consistent focus over its 60-year history has been on the development and production of mechanical watches. Company President and CEO Jiro Miyagawa is convinced that the mechanical watch has a future. “As one of the very few manufacturers in the world that actually manufactures mechanical watches at its own production facilities, and as one of Japan’s longest existing watch manufacturers, ORIENT will continue its efforts to boost the popularity of mechanical watches, one of Japan’s valued and traditional technologies,” he says.

ORIENT continues its focus on mechanical watches with three new launches in the ORIENT STAR collection: the “STANDARD-DATE”, the “SKELETON” and the “VINTAGE SKELETON LIMITED EDITION”. 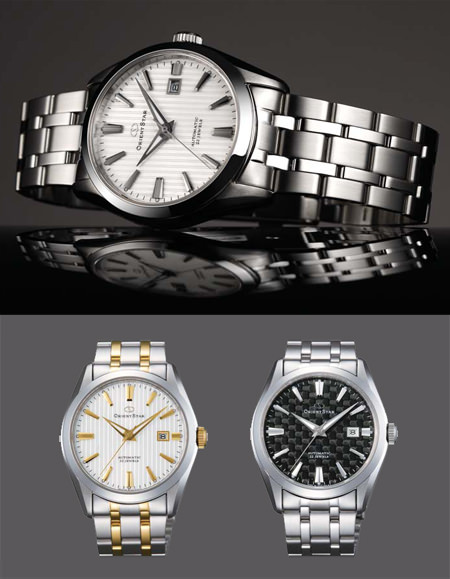 ORIENT’s interpretation of the classic three-hand watch comes in a 40mm stainless-steel case (slightly larger than previous ORIENT STAR models) with matching multi-link bracelet and is the first collection to feature ORIENT’s SAR Coating (Super Anti-Reflective Coating) on the sapphire crystal. In addition to reducing light reflection by at least 99 per cent, this special multi-layer coating also adds an anti-fouling film that offers resistance to stains as well as scratches. This new model is powered by the ORIENT calibre 40751 self-winding movement that operates at 21,600 vibrations per hour and offers a power reserve of at least 40 hours. 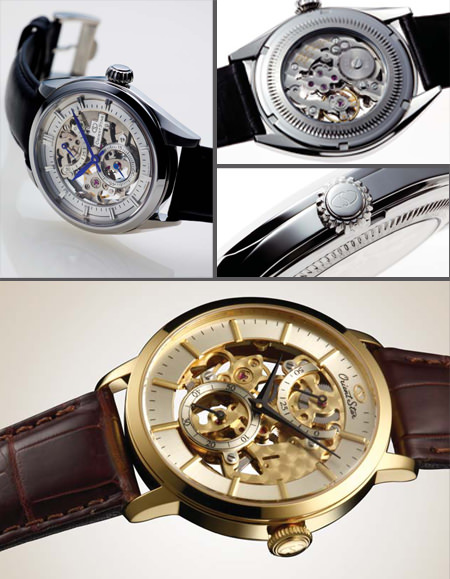 A two-layer skeletonised dial in this model shows off the ORIENT calibre 48E50 manually-wound movement that beats inside at a frequency of 21,600 vibrations per hour and offers a power reserve of at least 50 hours. Central hour and minute hands are complemented by a power reserve indication at 12 o’clock and small seconds at 6 o’clock, all with blue hands for clear readability against the white background of the dial. Two models are available in the 40mm stainless-steel case with matching stainless-steel bracelet or a black leather strap.

This limited edition of 1,000 pieces will be released in the summer of 2013 with a hand-wound skeleton movement that commemorates ORIENT STAR’s entry into the global market last year. It features the ORIENT calibre 48E51, a derivation of the movement used in the “SKELETON” model that features polished parts in a gold colour that recalls the brand’s “Mon Bijou” model, which revived this trend at the company in 1992. A vintage ORIENT STAR logo in italic script, positioned at 12 o’clock on the dial, sets the watch apart as a special model, which is confirmed by the limited series number engraved on the back of the slightly smaller 39mm case. Two models are available, each limited to 500 pieces: one with a gold-plated stainless-steel case, champagne dial and dark brown leather strap and one with a stainless-steel case, ivory dial and black leather strap.