The new G-SHOCK MUDMASTER, equipped with the latest technologies and specific mud resistance structure, is a perfect example of a watch targeted at professional users working in extreme conditions.

The G-SHOCK was created by Casio in 1983. Kikuo Ibe, Engineer of Casio’s Module Development Department, came up with the design after overcoming a number of challenges and technical problems. The G-SHOCK has become a genuine commercial phenomenon (with an estimated 70 million sales to date) and is probably the only true watchmaking icon that does not have a mechanical movement.

This exceptional iconic status, which has made it immediately recognisable, is a result of both the intrinsic features that make it the toughest watch in the world, and also its ability to incorporate new functions and display options while retaining its unique personality.Over the last few years the G-SHOCK has increasingly embraced an analogue display. The use of traditional hands (driven by independent micro-motors) has not only opened up new possibilities in both functional and stylistic terms, by increasing legibility and allowing more options for hierarchical display; it has also introduced the watch to a wider public who appreciate its unprecedented blend of high-tech, toughness and elegance.

Despite this evolution, the G-SHOCK has nevertheless remained true to its rugged roots, and Casio has continued to develop new models with specific features targeted at professional users working in extreme environments. 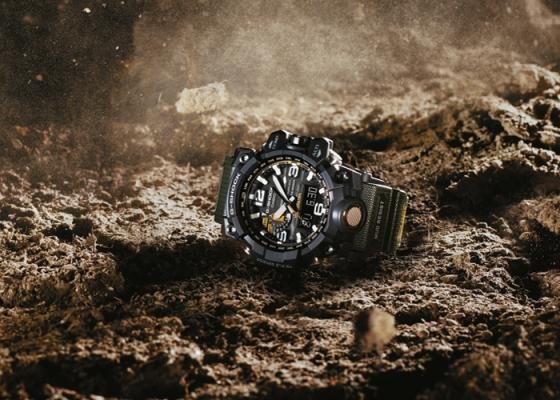 Casio’s engineers began by conducting an exhaustive survey to identify all the essential features for a watch that could be used in the most extreme conditions, during rescue missions to earthquake zones or during reconstruction efforts. What this study showed was that such a watch would have to be impervious to mud and dust, resistant to vibrations and capable of helping its wearer to establish their position and orientation, and predict the weather.

G-SHOCK MUDMASTER is the key timepiece gear for rescue missions , because of Toughness, Mud Resistance, Vibration Resistance and Triple Sensor. It is must have reliable gear for them, featuring many activities. 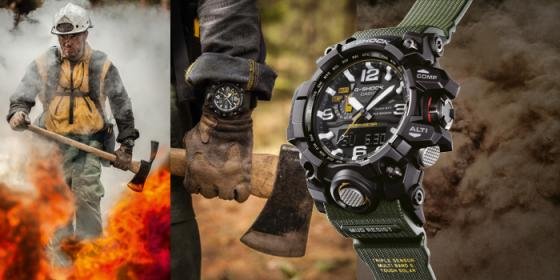 All these features make the G-SHOCK MUDMASTER an extremely tough watch. But what sets it apart from other G-SHOCKs is its new mud-resistant structure, which guarantees optimum performance under all conditions, including the most extreme. In order to provide complete protection from dust, sand and mud, its most sensitive points have been considerably strengthened. A new cylindrical guard structure, in the form of a minute pipe, has been added to all the pushers, not only protecting them from dust and mud but attenuating lateral shocks. Gaskets have been installed inside the cylinders and button shafts to further increase airtightness. Air vents have been placed at the base of the button shafts to prevent button malfunctions due to changes in air pressure.

The crown itself has also been made even more airtight with the introduction of an additional gasket between the crown and the case. And in order to avoid any user error, a slim red line on the crown provides immediate visual confirmation of whether the crown is locked or released, providing yet another safeguard.

In order to protect the movement from any damage or malfunction due to vibrations, a highly absorbent silicone-based gel, the patented Alpha Gel, has been packed under and around the movement module. Similarly, washers on the case lug screws prevent vibrations from loosening the band. 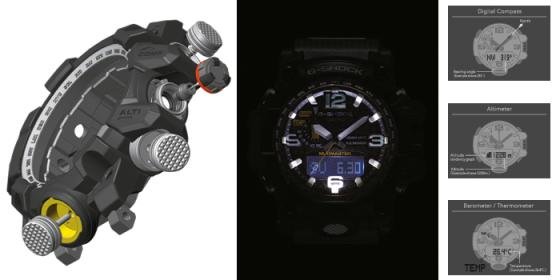 Although its durability under extreme conditions has been extensively ‘battle-tested’, it also needs to be readable in any circumstances. In order to guarantee optimum legibility, the hour markers and numerals, as well as the hour and minute hands, are coated in a luminescent material, and there are two tiny LEDs to illuminate both the dial and the LCD display.

The use of an ultra-light carbon-based material for the second hand has made it possible to increase its size; used with the compass function, the needle can give precise direction indications. The entire dial is protected by a very robust, clear and highly scratch-resistant sapphire crystal. Moving on to the functions, the G-SHOCK MUDMASTER is equipped with the latest Triple Sensor system to provide vital information. The sensors built into the module measure direction, using the digital compass in combination with the second hand, which points to north, atmospheric pressure, temperature and altitude, and are guaranteed to give precision performance under the harshest conditions. Introduced at Baselworld 2015, the G-SHOCK MUDMASTER is now available in three versions, with black, olive green or yellow strap.

“Heavy-duty Support for Any Task on Earth,” claims Casio’s tag line. There is little doubt that, aside from the professionals for whom the watch is primarily intended, the G-SHOCK MUDMASTER’s extraordinary capacities will cement its appeal to a broader public.