The MOVADO Edge, An Icon Revisited


The MOVADO Edge, An Icon Revisited

Almost seventy years after the original model, world-renowned industrial designer Yves Béhar has reinterpreted the legendary Museum Dial and its famous golden dot symbolising the sun at 12 o’clock. The result is brilliant – contemporary, ultra-efficient and poetic. We present the new incarnation.

Designer Nathan George Horwitt did not originally specialise in watches. And yet in 1947, the American created a true watchmaking icon: the Movado Museum, the first watch to join the permanent collection of New York’s Museum of Modern Art.

It was therefore only logical, almost seventy years later, for Movado to entrust another “outsider” – world-renowned Swiss industrial designer Yves Béhar, who lives in California and who has worked for Apple, Nivea, Prada, Mini and Puma – with the task of reinterpreting this legendary watch, with its famous golden single dot at 12 o’clock symbolising the sun. 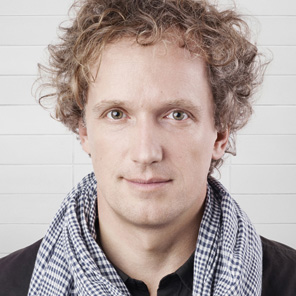 Yves Béhar points out: “In my eyes, the Museum Dial has always constituted an icon of modernity. That was why I was extremely enthusiastic about working with Movado. The mid-20th century was a pivotal time in the history of industrial design, known as Mid-Century Modern. It is vital that we continue to develop the products from that period by incorporating new ideas for the 21st century.”

When it was launched in 1947, the Museum Dial simultaneously embodied modernity, simplicity and poetry, expressed in a minimalist and ultra-efficient style. However, minimalism is in general one of the most difficult feats to achieve: “I have already experimented with it a lot, particularly in my furniture creations. It’s difficult to be simple! Minimalism is actually a more advanced form of complexity in my opinion because it is expressed by simplicity rather than by complication.” Yves Béhar therefore chose to reinterpret this iconic watch by bucking the trend of our times, in an age of ultra-complicated watches. “In producing the entire dial from a single piece that simultaneously contains information, modernity and poetry with the sun, and in varying the textures, with the sixty undulations around the dial and the sun that stands out and seems to ‘grow’ out from the surface of the dial, I wanted to create a 21st-century Movado . I also like to turn the tables on a style of watchmaking that displays its complication, thanks to a form of minimalism that flaunts its simplicity. Complexity is not necessarily what people are looking for today; instead, I worked on the notion of refinement, of simplicity, with the idea of taking away rather than adding to it.” 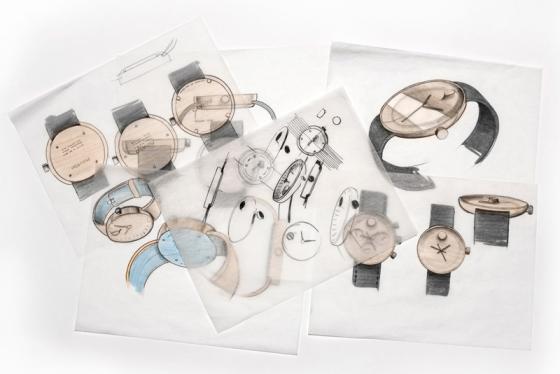 The result is the Movado Edge, a collection comprising 14 models that share the common feature of the raised dot at 12 o’clock, taken from Horwitt’s Museum Dial. Furthermore, on their coloured dials, sixty notches serving as minute markers give them a subtle texture evoking the sun’s rays. Yves Béhar has designed men’s and women’s models, as well as chronographs, available for the affordable price of between 500 and 1,200 Swiss francs. The men’s model is made from plain polished stainless steel or black PVD-finished steel and has a 40 mm round case. The sand-blasted concave dials are available in black, grey or metallic silver, as well as midnight blue. Each dial has a matt hour hand and a shiny minute hand. 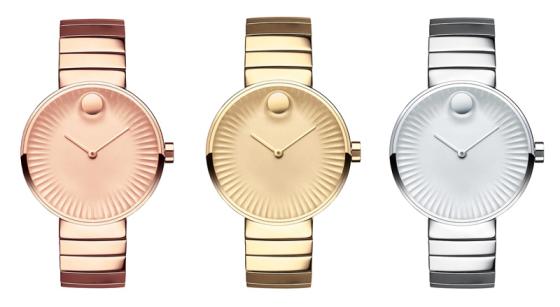 Meanwhile, the monochrome hue of the new women’s models highlights their elegant modernity. The 34 mm case is made from polished stainless steel or steel with a yellow or pink gold DPPV finish. The colour of the bracelet matches the hue of the entire watch to give a balanced aesthetic. 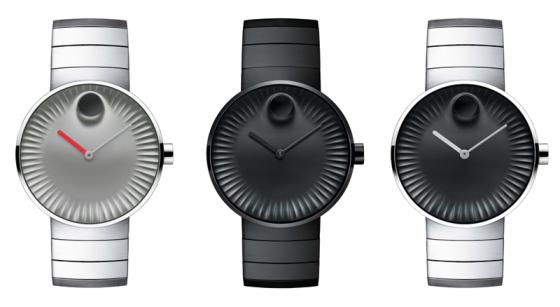 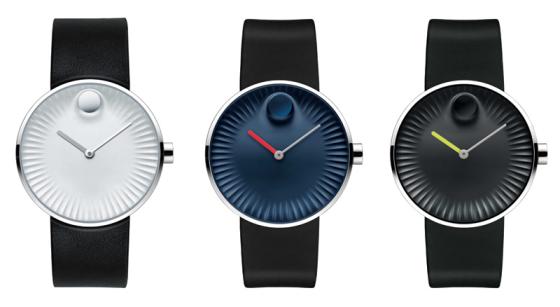 Finally, the futuristic-looking chronograph in polished stainless steel or steel with a black DPPV finish has a 42 mm case featuring distinctive push-pieces. Its concave sand-brushed dial, in black or midnight-blue aluminium, has a minute ring represented by Arabic numeral markers, printed in white on the inner surface of the crystal. This ambitious chronograph also presents a set of three sub-dials with white printed characters, as well as a green or red hour hand that contrasts magnificently with the dark dial. 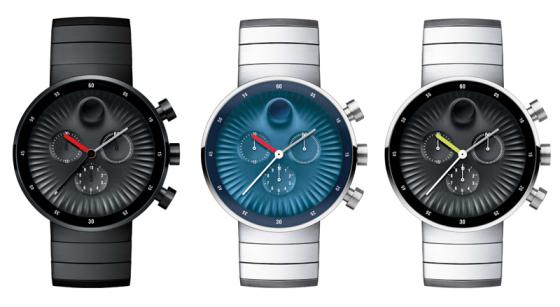 RESOLUTELY FOCUSED ON THE FUTURE

“The Movado Edge’s guiding principle was inspired by the use of new materials, new textures and a three-dimensional construction. Thanks to its arched forms, the light is marvellously absorbed and the gaze is drawn deep inside the watch,” explains Yves Béhar. When the person wearing the watch moves his or her wrist, the design changes, as the texture accentuates the movement of light towards the centre of the dial. “From a symbolic point of view, time is an indicator of change in our lives,” adds the designer.

While Yves Béhar admits to loving and even collecting Mid-Century Modern design objects, particularly furniture by George Nelson, Charles Eames or Joe Colombo, designing a “nostalgic” watch was out of the question for him. “It is an important period that is imitated a lot today. But it’s not really authentic to produce a purely Mid-Century design sixty years later. I think that it is important to recognise the innovation of those years, but to create products with today’s ethos, and therefore approach a new idea.”

Among the common threads that guide him in all his projects, including watchmaking, Yves Béhar attempts to work both in and for our time at all costs: even (and perhaps especially) for reinterpretations, the design should not fall within a form of romanticism or nostalgia. “Designers should be conscious of the world they live in. New ideas need a voice to be expressed. Design can be their representative.” Another of Yves Béhar’s essential characteristics is making maximum impact with minimum effort.

AN ASSERTIVE IDENTITY WITHOUT A LOGO

But is it really possible to revisit a design icon as impactful as the Museum Dial?

“Note that we called the watch the Edge and not the Museum 2.0! The aim is not to replace the Museum, which will continue to be an iconic watch, with the same purpose that it has always had. In my view, the Edge is a different interpretation. My idea was to create a product that takes Movado into the future.” The watch was named in reference to the sixty edged notches cut into the timepiece. “It is a sculpture that calls to mind dunes, hills or a shell... Everyone will have their own interpretation.”

The partnership between Movado and Yves Béhar was very smooth and free-flowing with quick and clear-cut decisions. The designer remembers: “Straight away, I felt that they trusted me. We spoke a lot about the design in general, particularly with the CEO Efraim Grinberg, but not strictly about the need to adhere to certain design codes or follow certain instructions.”

The meeting when the prototypes were presented was decisive. Yves Béhar suddenly had an idea, which he shared with the Movado team: that the design was so closely tied up with the brand’s style that it did not need to feature the logo (or even the words “Swiss made”) – again, in order to achieve maximum visual efficiency. Immediately, the team was very enthusiastic about this proposal: “I found that the brand’s certainty revealed the confidence that they had, both in themselves and in me!” The Edge will be available in new versions, including the new women’s models presented this autumn. Alongside this, Yves Béhar is continuing to work on new plans for Movado , beyond the Edge. After all, the designer originally came up with three different ideas, one of which is currently being pursued.

Could it be a smart product? After all, a man with roots in Watch Valley who is now firmly established in Silicon Valley would be well placed to combine the two worlds... “No. Incidentally I don’t wear a digital watch because the options currently available don’t satisfy the two needs that must be reconciled: the beauty of the mechanical object and new functionality. The challenge will be to make the watch incorporate all of our lifestyles – some are digital, while others are analogue. It’s a pairing that has yet to be made, and the smartwatch is still in its infancy. I personally feel that it is very important to launch the right product at the right time. I wear my Movado Edge, which is a good representation of a philosophy of time where I am trying, on a very personal level, to not be a slave to ubiquitous digitisation.”