THE POWER OF THREE


The latest creation by Antoine Preziuso Genève features three tourbillons on a revolving plate that resonate like three hearts beating in unison. A revolutionary watch, the result of an intense collaboration between Antoine Preziuso and his son Florian.

THE POWER OF THREE

The latest creation by Antoine Preziuso Genève features three tourbillons on a revolving plate that resonate like three hearts beating in unison. A revolutionary watch, the result of an intense collaboration between Antoine Preziuso and his son Florian.
T

he Tourbillon of Tourbillons is imbued with the symbolism of the figure 3. It is powered by three tourbillons at a frequency of 3Hz, linked by a triple-differential and separated by three “masselottes” in finely engraved gold. The three tourbillons revolve on their axis every 60 seconds, while the plate completes six revolutions per hour. The sapphire glass on the back of the watch, with its Côtes de Genève patterning, shows three jewels at 6 o’clock, echoed by three smaller jewels at 12. The timepiece also evokes Past, Present and Future, while the complex architecture of its three-metal case exploits the three dimensions to the full. 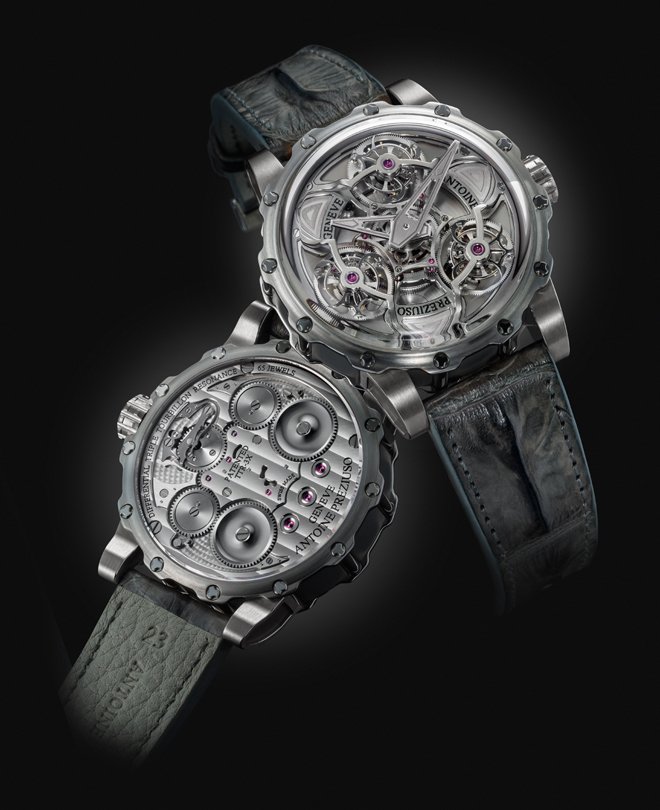 The Tourbillon of Tourbillons is full of explicit or hidden references to the figure 3 and its multiples – as befits the measurement of time on Earth, the third planet in the solar system! All the components of the Antoine Preziuso AFP-TTR-3X are finished and assembled by hand. The bridges are decorated with he Côtes de Genève motif, the plate and tourbillon bridges are in titanium, and the case’s support columns, horns and crown are made from 18-karat solid gold. The Tourbillon of Tourbillons embodies total respect for the codes of Haute Horlogerie. 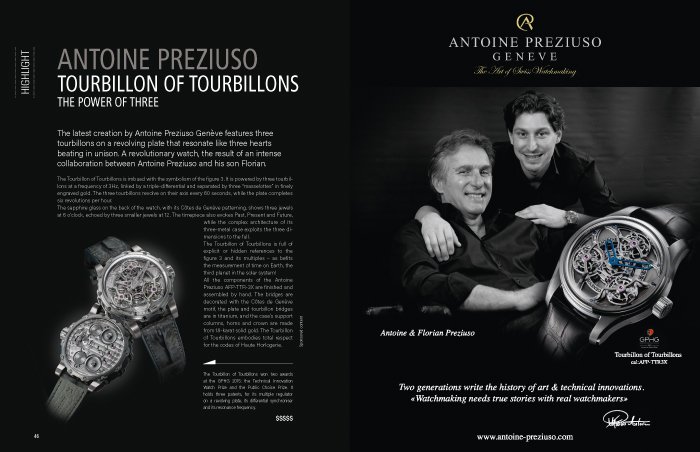 The Tourbillon of Tourbillons won two awards at the GPHG 2015: the Technical Innovation Watch Prize and the Public Choice Prize. It holds three patents, for its multiple regulator on a revolving plate, its differential synchroniser and its resonance frequency.