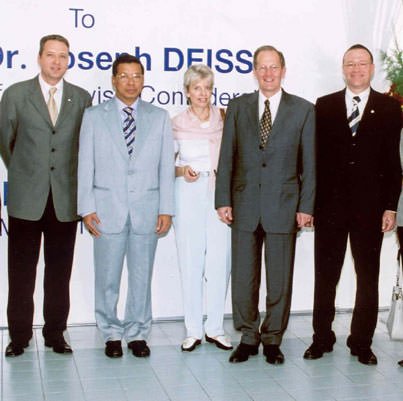 During his state visit to Thailand, Switzerland’s President Joseph Deiss visited RONDA THAILAND, a subsidiary of the Swiss RONDA Group.
He was received by Erich Mosset, RONDA’s CEO, Daniel Schirmer, its Technical Director, and local management. He was primarily interested in the activities of a Swiss company in Asia and Switzerland’s interaction with Thailand. During his factory tour, the President appeared impressed by the technology and cleanliness, as well as by the workforce’s discipline.
RONDA THAILAND was founded in 1989 and currently employs around 1,300 people. It produces electronic modules in clinically clean production facilities as well as coils and metal components. The company also assembles Swiss Parts watch movements, which are then sold through the RONDA subsidiary in Hong Kong. This foothold in Asia is an important factor in RONDA’s success and has made a major contribution to the expansion of its worldwide market share.
The RONDA Group also got off to a successful start in the 1st quarter of 2004. In addition to its range of basic products, the new RONDA startech chronographs have been very well received.